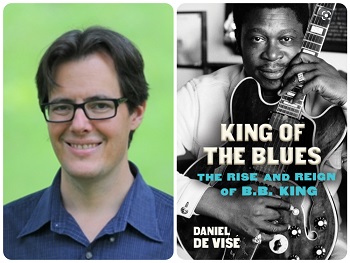 A Pulitzer Prize-winning journalist, Daniel de Visé is also the author of several books, including The Comeback: Greg LeMond, the True King of American Cycling, and a Legendary Tour de France and Andy and Don: The Making of a Friendship and a Classic American TV Show. His newest book is King of the Blues: The Rise and Reign of B.B. King, which Publishers Weekly calls “an intimate portrait of a cultural luminary…Even readers who aren’t fans of the blues will be engrossed by this nuanced look at an American icon.” De Visé discussed King of the Blues with WYPL’s Stephen Usery during a two-part interview in January.

This podcast comes courtesy of WYPL Book Talk in Memphis. Listen to it here. (And click here to read the Independent’s review of King of the Blues.)

Authors on Audio: A Conversation with Sara Fitzgerald

Authors on Audio: A Conversation with Michael Farris Smith