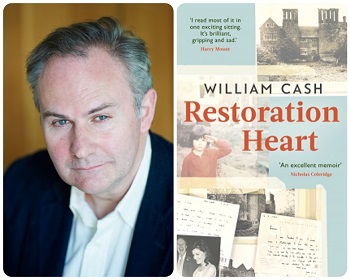 William Cash’s restore-a-wreck memoir, Restoration Heart, is a romantic comedy of love, double divorce, and redemption as he was saved from a midlife breakdown by rehabbing an ancient English manor house called Upton Cressett. The award-winning British author — whose previous books include a biography of Graham Greene and a Hollywood memoir — speaks here about his newest work and about his unexpected connection to an American musical icon.

You reveal in the book that you’re related to Johnny Cash. Do you share any characteristics with the country legend?

One of my greatest regrets of living in Los Angeles in the 1990s, when I worked for the Times of London, is that I never met “my American cousin Johnny,” who died in 2003. It wasn’t until 2014 that I learnt of the direct family connection, when his singer/writer daughter Rosanne wrote to my father (a Member of Parliament for over 30 years) and invited our family to attend a London concert for her Grammy-winning album “The River & the Thread,” which explores her Anglo-Scottish ancestry and Cash family American roots. It turned out that we share the same pilgrim master-mariner ancestor, William Cash, who was captain of the 17th-century pilgrim ship that brought Johnny Cash’s family to America in 1667, landing in Salem [Massachusetts]. Rosanne and our family have become friends. She appears in the book and has given a lovely quote for the American edition about how she identifies with the book’s sense of longing, remorse, and brutal honesty. I can identify only too well with Johnny’s many struggles.

What about sharing Cash’s religious temperament? You are chairman of the Catholic Herald magazine, after all.

Religion has long been part of the Cash DNA. The Cashes were Quakers who founded the famous Cash’s of Coventry silk-ribbon factories that had a royal warrant and factories in America in the 20th century and even made the labels for Levi’s. We converted to Catholicism in the 19th century, and our family founded Tablet magazine in 1840. So, I wasn’t surprised when Rosanne told me her father had a “Quaker” temperament. Preaching and God were in Johnny’s religiously dissenting family Celtic blood. As Rosanne and I agreed, there is something in our often wayward and self-destructive Anglo-Scottish genes that strives to make order out of destruction and chaos. Redemption from regret. Art from disaster — or “personal catastrophe,” as Rosanne put it.

In my memoir, I try to treat my two failed marriages, both to feisty New Yorkers, as part of my Gulliver-like voyage of the heart. If those two marital wrecks hadn’t happened, I wouldn’t have had the chance for redemption [the] third time around. I’m very happily married now and have two children. I can identify with fellow English Catholic Julian Fellowes — the Oscar-winning screenwriter and creator of “Downton Abbey” — who, when asked the secret of his success as a writer post-50, put it all down to “marriage.” I find being a Catholic in a country like England — where we are such a minority — has always made me feel an outsider, and this has doubtless helped me as a writer, always looking in with my nose against the window but never really belonging.

Coming from Quaker ribbon weavers but ending up a Catholic romantic is a significant change. Do you still feel any Quaker instincts?

The Celtic side of our family has long struggled with the temperance preached by my Quaker ancestors. Like Johnny’s family, we also have a DNA cocktail of high creativity with occasional self-destruction. Rosanne told me her father had the instincts of temperance but simply wasn’t able to live like a Quaker. I am the same, especially when writing a book (when I will often open a bottle of wine in the afternoon to get another 1,000 words written). But such character flaws were all part of what made Johnny an artistic genius and one of the most successful singers in American history. I have come to love the music of both Johnny and Rosanne, and I fully identify with their Celtic troubadour spirit. The memoir opens at my 50th birthday, with an English musician friend singing a specially written, tongue-in-cheek “cowboy ballad” looking back at the “hard knocks” of my love life and eventual return from America to the country family home of Upton Cressett.

You write about your “chronic inability to let go of my past.” Why do you feel such a duty to a house that had not been in your family for generations?

Ever since 1970, when we stumbled on the overgrown Elizabethan ruin, the house has been good to me and my family. Even when my life was falling apart in my 30s and 40s, the house was always the most durable of my relationships — more reliable than any love affair or marriage. I’m sure a lot of my love affair with my Shropshire country home and the desire to restore it when I inherited it as a gutted wreck was to do with it being a place [where] I was happy as a child. Our family has been at Upton Cressett for over 50 years, so it’s two generations now, and we are in touch with the Cressett family, who owned it for well over 500 years, until the 1920s. It represented my Arcadia.

The memoir is about salvation achieved through fixing up both house and heart. When you were writing, were you able to separate out the emotions you felt for the house vs. those you felt for the women in your life?

I believe the house has a magic pull. Neither of my [former] wives ever spent a might in the house after I took over ownership in around 2008. The house was a gutted wreck, and I lived in a former coach house nearby whilst the builders tried to put the house back together. I kept running out of money, so the project was very much “phased,” as I’d describe it. I do sometimes wonder whether my second marriage may have survived if we had moved in.

The book is sourced by around 1,500 love letters, written over 20 years, that you kept in a pig shed for a decade. Were you ever worried what the ex-wives or girlfriends might say when you revealed their contents?

That’s a tricky one. I strangely kept copies of all my letters over 25 years, photocopying them or keeping the original faxes, so I own the copyright. I sent the pages to several exes to check over, but not all. I think when you date or marry an author, you always know there’s a chance you will end up in a novel or memoir. I’ve been brutally honest but usually blame myself more than others.

When you began the restoration, did you envisage you would end up where you are now, with the house done, a happy marriage, and children?

No. That was only a dream. I think restoring the house was my last roll of the dice. I vowed never to date anybody again until the house was finished, even if it ruined me financially…I saw the project as a symbol of rebirth, and I was lucky enough to find a lovely English milliner third wife with the same bohemian artistic impulses as myself. Her wedding present was a new studio to make her hats. One of her bestsellers is a black felt “cowgirl” hat she created for Rosanne Cash, called the “Rosanne,” which makes me smile.

Cecily Watson is a London-based writer/researcher who has worked for the Mace magazine and the Catholic Herald.