An Interview with Walt Gragg

The former soldier and prosecutor talks about his unusual path to writing — and the eerie prescience of his debut novel. 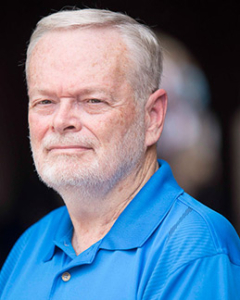 Henny Youngman once called mixed emotions watching your mother-in-law drive your Ferrari over a cliff. Author Walt Gragg knows all about mixed emotions. His debut novel, The Red Line, tells the story of a resurgent Russia invading Germany and sparking World War III.

You must have mixed feelings about where Russia is on the world stage today vis-a-vis your book. On the one hand, it probably raises interest in your novel. On the other, it's kind of a scary world with Russia reasserting itself and making you look rather prescient.

Yeah, I actually started writing this thing in 1994, nearly published it in 1997, and finally got someone to buy it in 2014. Honestly, along the way, since I had served the United States European Command Headquarters in the middle of the first Cold War, I kinda had a decent idea about Russian history, and I suspected even as far back as 1994 that this day might come.

You just look at them historically and this seems like a logical…I wouldn't say conclusion at this point because it's not finished…but a logical approach they're taking, from their view. So, yes, it's both not overly surprising but also quite scary. In fact, I have so many readers who're saying, "Your book is terrifying me. It's just too realistic."

Well, I actually came up with the idea all the way back in the 1970s when I was in Germany. I was there for 38 months and I saw a lot of the American plans for the defense of Europe. I was involved in a lot of high-level, theater-level-type war games. And the story just came to me all the way back in the mid-1970s. But at that point, I wasn't someone who ever thought about being a writer, and I just kind of stuck it away in some little corner of my mind and went on with my life. And then, by the middle 1990s, I thought, "Oh, I've gotta write this." And so actually the story's been rattling around for 40 years. But it seems to be very timely for 2017, so I'm not that upset that it took 40 years.

One of your central characters is Army Staff Sergeant George O'Neill. Was he inspired by any one person in particular?

None of the characters are really based on anybody except maybe O'Neill. And sadly, he's based on me. But he wasn't the hero in the first version; that's the change my editor made. He was just one of the guys involved. So I'm a little embarrassed because it actually is based on the position I held when I was over there. But that was not my intention; there are five storylines in the book, five stories of what I call ordinary soldiers and airmen who find themselves in extraordinary situations.

Writing fiction wasn't your inclination from the age of 14, toiling away with some sort of poetic calling. In some ways, it sounds as if you are more of a self-taught writer. Someone who had a story they wanted to tell and kind of backed into writing. Is that a fair way to say it?

Absolutely, yeah. I don't even consider myself a writer now. I had a story to tell. I have lots and lots of writer friends, which is one of the nice things about this job, and they all live and breathe writing. I think if you stopped them from writing, they'd stop breathing. But that's not me. I said I never saw myself as a writer, I was just a guy who stumbled into a story and it finally got to the point where I said, "I gotta try."

Talk about your writing process. I would assume it's a little unorthodox.

I don't know if anybody else writes like I do. I'm not even sure I know how I write sometimes. It's a pretty lengthy book, and it probably took me a good year, maybe even slightly more, to get the story down on paper from beginning to end. But it wasn't very well written at that point. I just really hadn't even learned the skills. I kind of believed that this is a talent that can be developed in people. And sure enough, that was true. So I kept working on it, and by 1997, I had written what I thought was something that was acceptable for the world to see.

I actually entered it in a writing contest at a writer's conference that summer. Took second place. And there happened to be an editor there from what was then Putnam Berkley, and he read the first chapter and said, "I want to see the book." I sent it to him, and about three months later, I get a phone call out of the blue and [the editor says] the book’s incredible, I'm a remarkable talent, he’s got to have this. And then a week later, he called me up and said, "Sorry, my publisher turned it down, it's just too controversial."

We kept polishing it, we kept working on it. I've probably written, or read anyway, every page in the book 100 times, easily. In 2014, we gave it a final try. I found a writer's conference called ThrillerFest in New York. And we went there, and they have an afternoon where you can pitch as many agents as you can get to. And I pitched nine of them, and seven wanted to see it.

But the real big break is the next day. Much to my surprise, the very same editor who'd liked it so much in 1997 was on a panel at the conference. And so I went up and reintroduced myself, and he didn't remember me, he didn't remember the book, of course, after 17 years. But just purely by happenstance, just luck, we ended up having breakfast the next morning. And two weeks later, I had an agent; 15 weeks later, I had a sale. Very same guy who rejected it in '97 bought it in 2014.

You sell yourself short talking about luck. To some degree, you made your own luck, you worked really hard. You went to that conference, you identified the person, and went up and talked to them. I think you might be an inspiration to people who want to write and shouldn't get too hung up on process or trying to be Herman Melville or something. Just tell your story.

Right. And I have a writer friend who told me a quote that I use a lot with new writers: "Getting published is a marathon, not a sprint." And it's those writers who've learned that lesson who have the best chance. It still doesn't guarantee you're going to get there, but at least it gives you a chance.

The best lesson a new writer can learn is patience is a virtue. And all writers were put on this planet to learn patience, and I'm pretty sure all writers, including me, fail pretty miserably. But it's a long, hard road. It's not something that's simple to do. And, yes, you need talent, but that can be developed. You need persistence, and you need some luck. You put all those together and maybe you'll find yourself in Barnes & Noble someday.

I'm afraid I'm going to have to give you another long-winded answer here. The reason I actually started writing in '94 is, I'm a Vietnam veteran, and in those days, we all knew somebody that was fighting over there. A neighbor, a cousin, a classmate, a friend, somebody was over there. We took it very personally, the entire country did. And that made a difference in getting that war to end, and it made a difference in our view of war.

But that got lost along the way. So, by 1994, war was turning back into something very casual, we had an all-volunteer army, nobody knows anybody in it. We're very cavalier about our approach to it. And that's going to really hurt us someday.

We live in a time where, 10 minutes from now, we could all be dead because the weapons exist to destroy all of mankind. And, yet, we don't seem to have learned our lesson. And so the book, number one, is supposed to entertain. You're supposed to enjoy it. I don't feel like I have any right to ask you to read it if I don't entertain you.

But more than that, the book is there hopefully to get you to realize that this attitude about war is wrong. That war has got to be a last option. And if we don't learn that lesson, we're in real trouble. This is certainly not a book that glorifies war in any way. Quite the opposite. It presents it in a very stark realistic way that's going to really shake you to your core, I hope.

An Interview with Randi Hutter Epstein

The physician talks hormones, health literacy, and the trouble with "endopreneurs."