An Interview with Vince Granata

How an inconceivable family tragedy led to an ultimately hopeful memoir. 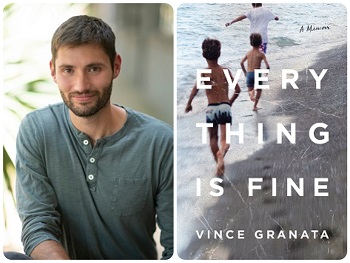 When Vince Granata was 27, his younger brother Tim, in the grips of unchecked schizophrenia, killed their mother in their childhood home. And I'm not ruining the ending by telling you this — the reader knows of this unspeakable tragedy from the start. In Everything Is Fine (the title is a reference to the way his mother often prefaced sharing troubling news about Tim), Granata unravels and retells the story of that day, the days before and after, and the incalculable ways in which we all try — and fail — to protect ourselves and those we love most.

There is a mounting tension in the narrative, even though the reader already knows the ending. Did you always intend to begin the book with your mother's death?

When I started writing the book, my mother’s death wasn’t the opening chapter, but that was more a function of that material being too painful for me to tackle at the beginning of my process. But I was always fairly certain that I’d have to begin with her death. I wanted the book to be about so much more than just that day, the day she died, so I needed to resist any kind of structure that withheld details of that day from the reader.

I felt that the reader needs to know that there’s a specific purpose to the upsetting section they’re about to read, and that I wouldn’t just put them through the intensity of that moment if I didn’t think it absolutely necessary for them to see the full picture of my family’s story. And I know, too, that this is exactly the kind of pleading I needed to do with myself when I wrote that section.

The primary-source documents from your mother — her texts to you, voicemail, especially her to-do list — are hard to read. She's there but not there. What sections were the hardest for you to write? Did any bring you joy?

Her handwriting is almost unbearably painful for me to see. I think when I see her handwriting, I get the strongest sense of what you’re getting at here, that feeling of someone there but not there. And most of these sort of primary sources felt this way, almost too painful to hold onto. In most cases, I needed to take them out of their primary form and transcribe them into a Word document or journal so they wouldn’t appear in my mother’s hand or in my mother’s voice. Even with her old phone, I think I only brought myself to turn it on twice — once to transcribe some text messages between her and Tim, once to transcribe some texts between her and me. So, in some ways, it’s hard to say that there was a hardest section, though the section where I write about her letters was probably the most surprising section — in both directions: sadness and joy.

Richard McCann was such a hero to so many writers in DC. You mentioned that his fingerprints are all over this book. Can you say more about his influence on your writing?

I’m not sure I could list all of the things Richard taught me. He showed me how to craft a retrospective presence on the page, pay attention to the power of a single line, dedicate myself to clarity and piercing honesty, to be unflinching. Perhaps the greatest gift he gave me was helping to free me from this very specific sort of guilt that plagued me when I first started writing this book. I convinced myself that my family’s pain was the only reason my dream of being a writer was coming true. I told Richard about this specific guilt, something that had started making the writing process even more difficult. He told me that we’re writers in spite of the terrible things that have happened in our lives, not because of them. He taught me that writing was something we did in order to survive. I’m not certain anyone has ever given me a greater gift.

Within your personal story, you reveal larger issues, particularly the flaws in our mental-health care. Do you hope that one of the biproducts of the book will be a closer look at where we have failed people like your brother? And what's the most important step in overhauling this flawed system?

Before I give one brief answer, I’d encourage anyone interested in this overhaul — and, yes, you’ve chosen precisely the right word — to check out the work of the Treatment Advocacy Center. What I tried to examine in my book is how our perception — or, often, misperception — of serious mental illnesses like schizophrenia leads to deeply flawed approaches to treatment. People struggling with schizophrenia don’t receive treatment until they are in crisis, and often these moments of crisis involve an interaction with police, which can be tremendously fraught. People in crisis experiencing psychotic episodes [and] if they’re lucky, get taken to hospital ERs — places for stabilizing acute trauma — and are, if they meet certain crisis criteria (problematically defined [and] based on danger to self or others) granted limited hospital stays where the goal is stabilization. Due to a myriad of factors, this type of treatment only provides a temporary life raft. We need to change the paradigm here and find ways to meaningfully address serious mental illness before people reach these crisis moments.

There is a section of the book where you are sitting alone with Tim at a college party. You admit to being afraid of the world he was convinced he was living in and, because of that, you had no idea what to say to him. That section made me wormhole back to visits with my mom, who was hospitalized with dementia. I was afraid of her, too. The delusions and voices and hallucinations are not just proprietary to those with schizophrenia. Do you see your own story having this capacity to reach out and touch others?

So many more people than I initially imagined have, sadly, experienced similar things with a loved one whose world has bent into terrifying shapes. Nearly every time I’ve read publicly from this book, I’ve had one or several people approach me afterward with their own experiences of trying to reach a loved one struggling with psychosis. It’s deeply upsetting to see someone you care about acting in a way that makes no sense to you or appear entirely different from the person you know them to be. The chance that one person’s story might change or that one family might avoid a tragedy like my family’s because of this book is far and away my greatest hope, and the one thing I’m certain gives me some real sense of peace.

The book jacket compares your story to An Unquiet Mind and The Bright Hour. For me, it's Angelhead, a book I teach in every memoir-reading class. It's an astounding story, like yours, of brothers. I'm wondering if you reached out to its author, Greg Bottoms, during the writing of your book.

Angelhead means a great deal to me! I’m so glad you’ve brought it up. Once I realized that I wanted to try writing a memoir, I picked up as many memoirs as I could — particularly memoir that dealt with mental illness — so I could try to get a feel for the genre. But Angelhead has the distinction of being the only mental-health-focused memoir I read before I realized I wanted to try writing my own. Essentially, what I mean is that I didn’t read Angelhead primarily as a writer. I was reading like a person in pain who wanted to feel less lonely in his pain. I do think Angelhead helped show me that writing this type of story was possible, that even a difficult, complex story like this one could be carefully told.

Lastly, as a memoirist myself, I have to ask: Did your father and siblings read any drafts of the book?

Yes, at a few junctures my family read versions of the book. Though they’re very supportive of me, this was (and is) painful for them. Memoir is, by definition, a self-centering form. and I've tried as best as I could to express that my account of what happened isn’t the sole or definitive account. I’m certain there are places where I’ve failed on that front. This issue is most complex when it comes to Tim. I told Tim about my writing throughout the process, but he didn’t read the book until about six months ago.

After reading, and in our conversations since, he’s been incredibly supportive and very in favor of the book’s publication. I like to think that this support is because he sees the book as I see it, as a way to show a full picture of him, a way to show him as so much more than the tragic event that incites the book. I have real reason to think that there’s a greater good that can come from telling our story, [but] that fact alone doesn’t make this process any less painful for Tim or other members of my family.