An Interview with Sarah Perry

The novelist talks sea monsters, divergent beliefs, and the complexity of human intimacy. 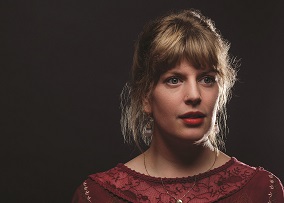 In Sarah Perry’s novel The Essex Serpent, an enormous sea creature terrorizes the residents of Aldwinter, a small parish in England. It is perhaps a coincidence that the newly minted “Essex Serpent” arrives almost in conjunction with Cora Seaborne, a recent widow who is desperate for a change in her tedious life, and who, along with her son and his outspoken caregiver, is adamant to make a new one far away from London.

But Cora becomes unsettled when she meets the local vicar, William Ransome. They begin a relationship of the mind (even though they are of different convictions) which soon turns into a physical attraction that they’re forced to keep in check out of respect to William’s generous and kind wife, Stella.

The Essex Serpent could easily be envisioned as a film directed by Jane Campion in the style of “The Piano,” with the fogginess of the Essex shore alongside Cora and William’s growing desire for each other.

In an email interview, the author reveals her vision behind the novel, and how her Essex upbringing played a part.

Which writers have inspired your own work?

The honest answer to this is that I am really not entirely sure, as I have always been such a voracious and indiscriminate reader, and because I suspect that the novels and novelists that I consciously admire are not necessarily the ones that have made themselves seen in my own work. For example, I have never especially admired or read the Gothic more than any other mode of fiction, and yet I seem to inhabit that mode more than any other.

If pressed, I suspect the biggest influence on me was the King James Bible, which was read at every mealtime in my home when I grew up and which I memorized and recited; Thomas Hardy, a constant companion when I was a teenager; and Iris Murdoch, whom I studied for part of my Ph.D. and who writes so compassionately and wisely about the "tangled webs" we all inevitably inhabit.

Why a monster sea serpent in Essex? How did that idea come about?

In 1669, a mysterious serpentine beast was seen menacing local villages in Essex. It was considered such a danger that a beautiful pamphlet with a woodcut illustration, entitled STRANGE NEWS OUT OF ESSEX, was produced (and can still be seen in the British Library). When I heard about the legend, I instantly wondered what would happen if it were to come back at the end of the 19th century, when Darwin's theories were common currency, natural history and fossil collection was a popular hobby, and the world was in a state of tension between the spheres of faith and reason.

The scenery in the novel is amazingly detailed; it's almost like another character. Is this intentional?

Very much so. I have always thought that the best fiction treats sense of place as one of the cast of characters, capable of being just as much a motivating force as any of the living characters. We are all familiar with that feeling of ease and serenity that can come in certain landscapes, and the claustrophobia or sense of unease that can arise in narrow places or eerie flatlands, and I wanted to exploit that to draw the reader more deeply into the text. I am Essex born and bred, and the landscape is wonderfully familiar to me, so it felt quite a natural approach to take.

All the characters in The Essex Serpent are complex and richly developed. Which were the most challenging to write?

As often proves to be the case, I found the main protagonist to be the most slippery and challenging. I think it is partly because, as a writer, I rather inhabited Cora in order to encounter the other characters, so that I spent more time looking through her eyes at others than reflecting on her. It is perhaps for this reason that she occasionally rather startled me by being sometimes casually rather cruel and unthinking.

The relationship between Cora, William, and Stella is not a love triangle, per se, but in many ways, it is. You write this poignant scene between them: “William Ransome and Cora Seaborne, stripped of code and convention, even of speech, stood with her strong hand in his: children of the earth lost in wonder.” Would you agree that this is love between them?

It absolutely is, but not in the conventional sense. I wanted to write about different kinds of love without elevating one at the cost of another, and I wanted to write about a man finding himself drawn to a woman who is not his wife, but that being not owing to some deficiency on his wife's part. I find the tendency to depict love affairs which are "morally justified" because, for example, the wife is a shrew, tiresome and unimaginative in the extreme.

Cora and William's relationship is based on their antagonism for each other's beliefs, but it’s also rooted in a certain admiration for each other. They refer to each other as “friends,” despite the evident attraction between them. Why is that?

I am very interested in intimacy and friendship that sits outside those conventional (monogamous sexual) relationships which have the stamp of approval of society. Friendships — between men and men, women and women, women and men — were at one time the subject of essays (Montaigne's “On Friendship”), poetry (Tennyson's “In Memoriam”), and, of course, a great deal of life writing in the form of diaries and letters. These days, friendship has been somewhat demoted to having a status and importance far below romantic and primarily sexual relationships. Cora and Will insist that they are friends because they are. That they are physically attracted to each other is a factor in their friendship — but not the sole factor which would demand they taxonomise their intimacy into something which is no longer a friendship.

I would like readers to go away with an enriched and enriching sense of the variety and complexity of human intimacy — including connections that seem at first glance to be unhelpful, unsanctioned, or transgressive. I would also dearly love it if I could upend some of the very mistaken notions in common currency about what Victorian women were like. They were not fragile creatures silently hemming handkerchiefs in gilded cages, but, by the end of the 19th century, were active in politics, social reform, the sciences, medicine, the arts, early feminism, prison reform, engineering, and math.

What future projects are in the works for Sarah Perry?

I have just completed my third novel, which I suppose in some way concludes a trilogy of books playing with the Gothic mode. This one is a contemporary Gothic novel set in Prague, and has caused me some fairly harrowing nightmares…