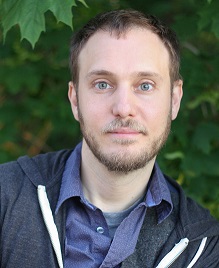 In Sam J. Miller’s debut YA novel, The Art of Starving, teenage Matt lives in an impoverished Upstate New York town. He is deeply in the closet, and his older sister has recently run away from home under mysterious circumstances.

This combination of stress activates a self-destructive tendency which takes the form of an unusual eating disorder: Matt believes that starving himself gives him superpowers which will aid him in finding his sister. The first-person narrative is intercut with wisdom from an imaginary instruction book. As a result, the reader can almost believe in Matt’s self-destructively wrought powers.

Miller’s forthcoming novel for adults, Blackfish City, is a foray into science fiction; it’s filled with biotechnological wonders and terrors. The fast-moving plot both highlights and underscores Miller’s thematic preoccupation with social injustice.

Miller’s short fiction — which often explores queer identity through the lens of horror and science fiction — has won and/or been nominated for many major genre awards, including the Shirley Jackson, Nebula, and World Fantasy awards. Here, the author discusses his stories about “broken people in a broken world.”

When writing The Art of Starving, what sort of research did you do about eating disorders in gay male teenagers? How much was based on your own personal experience?

There's not a ton of research out there, unfortunately, and a real paucity of memoirs and novels that deal with the subject of eating disorders among gay men. The National Eating Disorders Association has some great information on it. The statistics are so sobering: “In one study, gay and bisexual boys reported being significantly more likely to have fasted, vomited, or taken laxatives or diet pills to control their weight in the last 30 days. Gay males were seven times more likely to report bingeing and 12 times more likely to report purging than heterosexual males."

In the end, this book comes mostly from my own personal experience of having an eating disorder, and how that connected to my coming to terms with my identity as a gay man, and how much hate and violence and toxic masculinity I'd internalized in the course of becoming a man in a monstrous society. As queer people, we always have people telling us we're monsters, we're sinners, perverts, defective — it takes superhuman strength and power to overcome all that and emerge as a whole and healthy person. The process of getting there can be so painful, and that's the story I needed to tell in The Art of Starving.

Have you gotten any feedback from eating-disorder survivors?

I have gotten some incredibly kind and overwhelming correspondence from fellow survivors of eating disorders. One young woman wrote to say that she'd never been able to explain to her friends and family what she got from her eating disorder, but the book's central metaphor of the power that comes from violence and self-harm helped her understand and communicate it in a way that would enable them to support her better during relapses. I've also heard from survivors who found it triggering and had to stop. I really respect that, of course. My goal with this book was to dive as deep and honestly into my experience as possible, and I know that might be difficult for folks who are still struggling with these issues.

Each section of The Art of Starving is opened by a quote from an imaginary rulebook, a la Sun Tzu’s The Art of War. Who is the “rulebook” for?

Why, marginalized teens on missions of bloody revenge, of course! I mean, I'm only half-kidding. [The writer] Ernest Gaines talks about the importance of having a "perfect" or primary audience in mind when you're working — the group of readers you most want to reach, although, of course, as writers, we aspire to reach many groups of readers. For me, that primary audience is queer kids and other people dealing with oppression and marginalization, to show them that they are way more awesome than the people who make them miserable. And that they have superpowers. And that all the things that make them miserable (homophobia, racism, toxic masculinity, self-loathing) are monsters that can be fought, and their ability to hurt you can be broken.

You also write NSFW (Not-Safe-For-Work) adult fiction. Was it a challenge to write for a younger audience?

Not really. I think my YA novel has more on-the-page sex than my novel for grownups! When I was a teenager, I craved books that talked honestly about sex and intimacy and mental illness and addiction and all the other things that were going on in my brain but that grownups were trying to shelter me from, and that movies and videogames weren't addressing. It's part of why I devoured everything Stephen King had ever written.

Young adults want and deserve honest talk about sex — especially queer ones who might be unlikely to have any help or advice or instruction manuals for sex outside of pornography, which is really not helpful at all in terms of an educational tool. So the least I could do was write frankly and honestly about sex…and how it's possible to really, really want to have sex with someone and still be really, really scared to.

Much of your short fiction mixes queer history with genre tropes. What draws you to those stories?

I crave narratives of resistance — stories of how broken people make their way in a broken world, and how they fight back against impossible odds. And how they win. It's easy to feel overwhelmed and terrified and powerless in the face of massive injustice and oppression, but the reality is that people have always faced it and always fought back, and just because the oppression didn't evaporate doesn't mean they didn't win. So those are the stories I want to tell, and reflecting on history allows me to explore issues in ways that contemporary readers may be able to see more objectively. If we talk about gun control in a story set in the past — or the future — maybe folks can look at things differently without the blinders of their own defensiveness.

What under-the-radar fiction are you currently reading?

I'm really excited about Bryan Camp's The City of Lost Fortunes and Kosoko Jackson's A Place for Wolves. And, of course, the new books by Angie Thomas (On the Come Up), Becky Albertalli (Leah on the Offbeat), and Zoraida Cordova (Bruja Born). Billy Merrell's Vanilla devastated me in all the right ways. Mongrels, by Stephen Graham Jones, might be the best book I've read in a couple of years. (And this guy Craig Laurance Gidney has a phenomenal novel I got a chance to read in workshop, and I can't wait for it to be out in the world.)

An Interview with Hannah Pittard

Can childhood wounds ever heal? Maybe, says the author.

The author of Everyone Loves A Good Trainwreck: Why We Can't Look Away