An Interview with Peter Henriques

In his new book, the historian lays out the attributes that made our premier Founding Father so formidable. 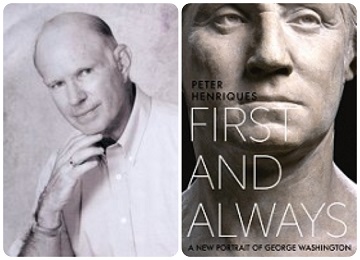 Your first essay in First and Always identifies 10 attributes of George Washington’s character that were important to his success. What were the three most essential ones?

I posit that 10 factors combined to make George Washington America’s premier leader (good fortune, physicality, ambition, determination, passion, courage, toughness, a realistic philosophy, talents, and character). In hindsight, I would add to that list modesty. To single out three, I would choose determination, realistic philosophy, and character. His “patience in suffering” and remarkable persistence amid adversity enabled him to achieve goals otherwise impossible. His grasp of human nature and the role of self-interest in motivating men was crucial. In Gouverneur Morris’ words, GW’s insight into human character was “an estimable gift to his country.” The Greeks, for whom character was destiny, codified that aspect of humanity into four virtues: fortitude (or courage), temperance, prudence (or wisdom), and justice. All these Washington possessed in abundance, allowing him to be not only a great leader but also an admirable one.

Others have applied unpleasant words to Washington’s mother, Mary Ball Washington, calling her a “harridan” and “termagant,” though you portray her as key to his personality. How do you account for the hostile descriptions of her by others?

No doubt authors can find in Mary’s life grist for labeling her a “harridan” or “termagant.” From her unreasonable demands on GW while he was on the frontier during the French and Indian War, to her constant complaints of impoverishment during the Revolution, to her constant hectoring of her favorite child for money, Mary appears anything but the ideal mother. I see the story as more complex; hence the title of my chapter on that bond: “Complicated, Very Complicated.” This applies especially to GW’s younger years. With no father to serve as a patron and lacking financial resources, young George, in order to advance in deeply hierarchical and patriarchal Virginia society, needed to forge alliances with men of years and wealth — and ably did so. He could hardly have attracted mentors and allies if he were clumsy or socially inept or of poor morals. Certainly, much credit for George’s early success must go to his mother, and Mary deserves admiration for what she accomplished. Washington himself recognized his debt to her. In speaking at Fredericksburg after the war, Washington’s handwritten and hand-corrected speech deserves more focus than it has received. In it, Washington referred to Mary as “my revered Mother; by whose Maternal hand (early deprived of a Father) I was led to Manhood.” No doubt his mother often exasperated and even angered him. Yet, there was in him a sense of a debt owed her, grudging admiration that strength pays to strength, and some affection tempering his frustration and annoyance.

You profile seven of the enslaved people at Mount Vernon, to the extent that surviving records allow descriptions of them. Can we learn about Washington by studying the lives of those he owned?

Glimpses of the man appear in the lives of the individuals he owned. One sees Washington’s focus on advancing his economic interests in his efforts to extract maximum production from enslaved workers and his response to the frustration he felt when unable to do so — allowing overseers to use the whip, himself occasionally cuffing a worker who displeased him, telling an injured worker that if he could eat with one hand then he could work with one hand. More sympathetic encounters show him giving money to a servant bitten by a rabid dog to travel to Pennsylvania to seek a cure, allowing some enslaved workers to own guns and sell produce they had grown, giving his house servants tickets to the circus and theater, putting himself at inconvenience to satisfy the wishes of his personal servant, William Lee, and similar interactions. [Still], the corrosive chain of racism and slavery snaked through the new republic and diminished every life it touched, Washington’s life included.

Washington espoused nonpartisanship, yet you trace his fiercely partisan behavior after he left the presidency. Do you think he was aware or troubled that he was changing course this way?

I believe that, in this case, George Washington experienced cognitive dissonance. Any fair reading of his correspondence makes clear that he was fiercely partisan, viewing as he did Jefferson’s republican party as being guilty of a systematized attack on government leaders in order to overthrow and destroy the Constitution and place the “affairs of this country under the influence and control of a foreign nation.”

Washington’s political philosophy ill-equipped him to deal with the emergence of competing political parties. He was a classical republican of a conservative bent, intensely fearful of the dangers he saw posed by partisanship. He could not accept that dissent and a competing vision of the common good might nourish political culture, infusing it with vitality. The idea that there could be equally valid but differing notions of the public interest was utter nonsense to George Washington — a heresy violating republican principles. Thus, he did not see himself as a partisan but rather as a defender of good government against those bent on undermining it.

You’ve written three books about our first president. Is there another part of George Washington’s life that you still want to study and write about?

David O. Stewart, a member of the board of directors of the Independent, is the author of the recently released George Washington: The Political Rise of America’s Founding Father.