An Interview with Nelson DeMille

The bestselling novelist is back with a brand-new protagonist. 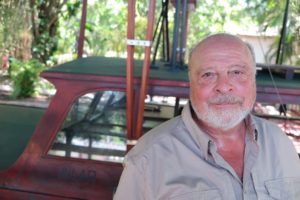 Calling Nelson DeMille a novelist is leaving out a lot of the story. Along with writing six New York Times bestsellers, he’s a decorated Army veteran, winner of the Air Medal, Bronze Star, and Vietnamese Cross of Gallantry. Oh, and he’s a member of Mensa, an organization full of people smarter than you and me.

His 1992 novel, The General’s Daughter, was made into a hit movie in 1999 with John Travolta and Madeline Stowe. The novel and film revolve around his most popular fictional character, John Corey. Moving to a new publisher, he’s decided to take the commercial risk of launching a new character: Daniel Graham “Mac” MacCormick, a veteran and charter-boat captain in Florida. Mac’s first adventure comes in DeMille’s latest page-turner, The Cuban Affair.

You're so established with John Corey. What was the inspiration behind bringing in a new main character?

That's a good question. Writers who deviate from a main character often see a decline in sales, and I understood that. I am a commercial writer, but I don't look at the bottom line. I look at the bigger picture. John Corey is a very successful character, and he's in seven books, all bestsellers. Also, I have a new publisher. I went from Grand Central Publishing to Simon & Schuster. I'd been at Grand Central, which had been Warner Books, for over 30 years, so this is a big change in my life and my professional life.

Simon & Schuster wanted to kind of start fresh, and I was good with that. I said, "Let's just do that, and all I need now is a new main character." I had the plot of my outline of what I wanted, the outline of the plot in my head, which is a book set in Cuba, an action/adventure set in Cuba, so I needed a character that would fit into that. I decided to create Mac MacCormick as a 35-year-old Afghanistan War veteran. He's a college graduate. He was an infantry officer in Afghanistan. That was the basis of him. He was born in Maine, now living in Key West, Florida, and he owns and skippers a 36-foot fishing boat, which he charters, and that's his post-Army career. It was a natural that a man with a boat would be involved with an action/adventure story set in Cuba, 90 miles from Key West.

Your timing is interesting, too. I mean, in the last year or two, things with Cuba seem to have shifted quite a lot. What was the Cuban dynamic when you thought of the book and started writing it?

Cuba was in the news, which is why I kind of thought of it. Obama had begun the process of the thaw, and when I went to Cuba, it was October 2015, and the American embassy had reopened by that time. I had an opportunity to have a private meeting with the American acting ambassador, Jeffrey DeLaurentis, and I got some really interesting information from him. It was the beginning of this whole process that a lot of people were very hopeful about, that we could now normalize relations with Cuba, but there were a lot of stumbling blocks. As you know, the present administration rolled back some of the advances that were made under the Obama Administration.

I don't disagree with either. The opening is a good idea, but Trump's idea is that we need something back from the Cubans, especially in terms of human rights for the Cuban people, in order for us to give. Somewhere between the hardliners and the people that want to go just give it all away, so to speak, is probably a good course of action. It’s very complex. I mean, it's been [almost] 50 years since the Cuban Revolution.

Our histories are so intertwined, and they've been so complex, that this is going to take a long time before we do normalize relations. Yet, we're so close geographically, and a lot of South Florida is full of very, very successful Cuban-Americans who want to go home, maybe not to live, but to be able to visit freely and to buy, maybe, second houses in Cuba and see family.

There's a lot of emotional baggage there, too, between the Cuban-American community and the Cubans, many of whom want to get out of Cuba by boat, obviously, what they call the Rafters. It's an ongoing story, but not always well-covered in the news, because there's so much else going on. If this was a quieter news period, I really believe that the Cuban situation would be more to the front.

Let's talk about John Corey. I understand there's a TV series brewing. You never know, with TV and movies, how things are going to move forward, but can you give us any kind of update?

Yeah, well, you're right about that. You never know. The rights to the Corey character are owned by Sony, which is Columbia Pictures and Sony TV and Sony Corporation, and they've always wanted to develop it. They partnered recently with ABC TV to co-produce the John Corey series. There are seven books in the series, and they wanted to do what they call a limited series, which is I think 10 or 11 episodes.

I saw the screenplay of the pilot episode, which wasn't made this spring, but will probably be made this year. I don't know when it will be shown. You know this is TV land, and [it’s] a little different than feature films. I'm not that familiar with TV land, but apparently if the pilot does well, they'll pick it up and it will be a TV series.

The first episode that I read was good, and they're kind of thinking now of who could star in it. The one who was interested is a feature-film actor, Ben Affleck. He doesn't normally do TV, but he was interested in the character. Alec Baldwin, at one time, I think was also interested in the character. It's there, but, as you say, we never know what's going to happen. You don't know how things can wind up on the small screen or the big screen and why other things don't wind up on the screen, but I'm hopeful.

Staying with Hollywood a second: “The General's Daughter,” with Travolta in '99 — were you happy with that movie?

I was. I became friends with the producer, Mace Neufeld, who has made a lot of movies over the years. He made the original “The Hunt for Red October” and the other Tom Clancy books in that series. He's still the producer of record on any of the Corey books. Yeah, I was happy with it. It was a good screenplay, made better by some good script-doctoring.

I had a chance to sit down with Travolta for about an hour. He got a copy of the book, and he had it all dogeared and tabbed and underlined, and we went through the book, and he wanted to know what I thought should stay in and what should come out, because a lot of stuff has to come out with a 90-minute movie. It was an interesting process, an informal process.

I wasn't formally involved with the movie, but I did give them suggestions on the screenplay. Ultimately, it was a strong cast, and it was a box-office success. Critically, not everybody liked it, but more importantly than the critics, the people liked it. We're looking to do a sequel to it, because Up Country would be the sequel to The General's Daughter.

Do you have a favorite among your books?

The Gold Coast. It was a more literary book, and the book the New York Times said compared me, as a writer, to Edith Wharton. The Gold Coast itself was favorably compared, by a number of reviewers, with The Great Gatsby. Somebody even said [that] in many ways [it was] better than Scott Fitzgerald's Great Gatsby, so sure, I mean, that's all big ego stuff. I'm an action/adventure writer, but this was a more serious novel that was taken seriously and got great reviews. I think writers have to say, “If I only wrote one book and that's what I had to be remembered for, what would that book be?” I'd say Gold Coast.

I can't imagine you began that book or any of them expecting to be compared to Edith Wharton, of all people.

You read The Cuban Affair, and you can see that it's got a sequel built into it, again with the character of Mac MacCormick, who could be a continuing character. That's a possibility. I'm not crazy about sequels, no author is, and you're always warned against doing a sequel when you have a big bestseller, because you should leave well enough alone, but there's a possibility of doing a sequel, because the story ended on a note that kind of called for a sequel.

The other possibility — we were just talking about The Gold Coast — was to set a book again on the gold coast in Long Island and do something local, something that I know about that might take a little bit less research and a little bit more on the literary side. The third possibility is that we could bring back John Corey, who pays the rent for me. He's been good to me over the years, and the readers, I think, really want to see Corey come back. I'm now weighing all the options, as they say.