An Interview with Nancy Naomi Carlson

The poet talks calazazas, the musicality of language, and ensuring that nothing gets lost in translation. 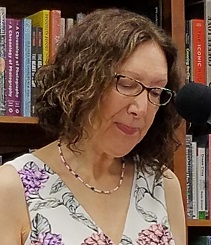 Last fall, the post office mistakenly delivered a stack of literary magazines addressed to six other people all to me. Most of them went back the way they came, but one, which my husband had opened, we delivered in person. I dropped it off at the recipient’s house with a note — and signed my full name.

Later that day, Nancy Naomi Carlson sent me an email via the form on my webpage, thanking me for returning her magazine. (Good sleuthing skills!) I responded, and we discovered we were both writers. I was excited to learn about the French novel she had translated, and I asked if I could interview her.

What drew you to translate The Dancing Other?

I guess it’s most accurate to say I was drawn to the author, Suzanne Dracius, from Martinique. I had already translated her only collection of poetry (at the time), Calazaza’s Delicious Dereliction, and was fascinated by its themes, culture, and brilliant use of language. Before translating Suzanne, I was unaware of the term “calazaza,” which refers to someone with very light skin on the black-white continuum. I was even more unaware of the marginalization that affects calazazas, as they are too dark-skinned to completely feel at home in Paris, and too light-skinned to completely feel at home in Fort-de-France [Martinique]. Suzanne is a calazaza, so she speaks from the heart about this issue.

And there is obviously a love for words that brings you together — Suzanne writes like a poet.

Yes, hers is a lyric style, filled with alliteration, assonance, and rhyme. I was also drawn to Suzanne’s words. A former university professor, she is fluent in Greek and Latin and, in addition to these languages, peppers her French with Martinican Creole. And verlan (French slang which reverses letters of words). And a ton of wordplay…always challenging to translate. So, after completing my translation of Calazaza’s Delicious Dereliction, I felt compelled to translate The Dancing Other, but was hesitant at first, due to the fact that I am a poet, I translate poetry, and had never before written or translated a novel. I truly admire novelists and their attention span.

You were part of a team for this translation. How did that work?

I had made up my mind that I couldn’t do the translation by myself. I asked my ex-husband if his French wife, Catherine, whom I’d never met, had any interest in translation and, long story short, she agreed to be my co-translator.

She would provide me with a literal translation of each section, along with multiple questions, and I would use it, along with my six dictionaries and a thesaurus, to infuse the music of the original into the text. Then I’d send the draft back to Catherine with my questions…and we’d repeat this process for the same section of the text until we could go no further between ourselves and would ask Suzanne for assistance. (We also used an Italian version of the book when we got stumped.)

The book took us over a year to complete! I chose not to read the book in its entirety before translating it. This approach kept me eager to work on the text each day.

How does being a poet affect your approach to translation?

The fact that I am a poet, as well as the fact that I was translating the very lyrical novel of a poet, made the translation project very enjoyable. When I translate poetry, I do a color-coordinated “sound map” of the salient patterns, including alliteration, assonance, rhyme, and rhythm. I highlight the wordplay. Although I can’t duplicate all of the sound patterns in my translation, let alone where they occur in the text or the exact sounds (some French sounds don’t even exist in English — like the distinctive French “r,” the nasal “an/en,” and the crisp “i” and “u”), I do all I can to honor the music of the original.

Beyond the lyricism and sound, what do you most love about this book?

I love the sense of humor that pervades much of the book — especially the wildly inventive Creole tales of Ma Cidalise, who befriends Rehvana, the protagonist. I love the fact that Suzanne uses Rehvana’s boyfriends to demonstrate each new identity she “tries on.” The obsessed leader of an African sect. The one who brings her back to Martinique to rediscover her roots. The one pursuing a “respectable” career. I was caught up in Rehvana’s struggles and so wanted her to figure it all out.

Oh, those boyfriends! Let’s talk about Rehvana’s, as she puts it, “rebirths to returns…quests to rejuvenation.” Why is she so driven to try out these different men and different lives?

Rehvana is not comfortable in her own skin and cannot accept her multicultural heritage. Rather than X or Y (Martinique or France; Mother Africa or Creole roots, etc.), the solution seems to be embracing X and Y. She is starving for an identity that makes sense.

And, on the other hand, there’s her sister, Matildana, with whom Rehvana has a strong tie.

Matildana, her older sister, revels in all aspects of herself. She excelled in her Greek and Latin studies at the Sorbonne but is just as successful learning the intricacies of Creole. Although she admits to preferring Mozart to the “tom-tom of the big ka,” and doesn’t much care for headcheese or lungs, she loves stewed breadfruit and salt fish, and reading Senghor. And she loves to dance the dance of her ancestors. She “lives the dance.”

An Interview with Adriana Herrera