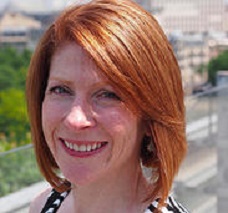 You’re a wealthy executive who loses all your money in one day. You’re a desperate widow whose suffering is only relieved by more suffering. You are brothers clawing at a better chance in life, and you know if you can just make it to the interview, college will save you. Baltimore unravels you, but it’s all you know, so you tighten your grip before everything crashes.

Kathy Flann doesn’t flinch in the stories in her new collection, Get a Grip, not even in her adoration of the second-person point of view. These are bold, messy tales of glory and gloom. She gives you a Baltimore full of charm that sometimes chokes.

Kathy and I met through the D.C. Women Writers. We’ve crossed paths in our overlapping literary worlds of Baltimore and DC. It is her sense of humor and narrative nerve that always leave me looking forward to her next story.

These are gritty stories. They’re tense. I found myself reading them through splayed fingers hoping your characters could find their way to safety. They are so much on the edge of destruction and despair. Yet there is hope and humor. What inspires your characters and their struggles?

It’s interesting that a lot of people use the word “gritty” to describe the book. I never thought about it that way when I was writing it. I didn’t even think about the characters as flawed, exactly, though they are. Sometimes I wonder if people would see the inside of my head as gritty!

Grit seems an accomplishment, meaning you’ve accessed the depth of your characters. They’re real; I know these people.

I just tried to get out of each character’s way. I tried to be this person, to see this particular life through this particular lens. I thought, “What does this person want? Why?” I asked myself these two questions over and over. Sometimes I wouldn’t know the answer, and I’d have to walk away from the story for a while and come back when I could hear the character better.

For example, the main character in “Neuropathy” has a son whose girlfriend is in a wheelchair. She finds the girlfriend’s ID for the handicapped bus on the floor. I thought, “What does she want at this moment? Why?” I was surprised to discover she wanted to steal that ID. But I didn’t know why at first. What was she going to do with it? I walked away for a while, and then it started to become clear that this had to connect back to the overarching desire she has to be noticed. I had to get into her head really deeply because stealing from a person in a wheelchair is pretty low.

I believe that people can do bad things sometimes because the brain is so good at making all kinds of stuff seem reasonable. This is something that I find pretty fascinating. I also find it funny, even when it’s simultaneously terrible. I think we can all recognize the strange gymnastics that characters’ brains do in the name of justifying something because we all do that in one way or another.

The process of writing this story — or any story — is figuring out how the person thinks and why she thinks that way. The plot falls into place if I can do that. If a person wants something very badly, chances are that she’s going to do something about it.

So many of these stories are in the second-person point of view. What draws you to it?

To me, the second person is that voice in our heads when we’re uncertain or frustrated with ourselves. “Ugh, you goof, why are you always late?” Or “You can do this! You got this!” The latter is a pep talk, the need for which suggests we doubt our abilities. For characters on the edge, in deep self-doubt, the second person can be a good fit.

What does second person accomplish that another point of view can’t?

It underscores the character’s feeling of lack of control and the desperate attempts to regain it. I think it also suggests that the character is maybe involved in some self-deception. I picture it like a version of first person in which the character is divided against him or herself, almost talking internally. It has this finger-wagging quality, and I do think that we talk to ourselves like that a lot.

The downside of it is that it calls a lot of attention to itself, and some readers will never fall into the dream of the story because of that. I’ve had editors reject my second-person stories with notes that say, “Never send us a second-person story again. It is not for us.” You can’t imagine someone saying that about any other point of view.

You’ve taught creative writing both abroad at the University of Cumbria in England and currently at Goucher College in Baltimore. How do you balance teaching and writing?

I don’t think I do it very well. I am always struggling to find time to write and struggling to get my work done for classes. It is a privilege to have the opportunity to engage with students, and I want to provide a meaningful experience. There is no “off the clock” in teaching — I am emailing with students days, nights, and weekends. Plus, there is no end to the possibilities for enhancing a course. So I am always trying to find end points, to say, “Okay, stop now.” It took a long time to realize that I had to be the one to say that to myself.

Do you ever feel you have to choose between teaching and writing?

The nice thing is that the two endeavors feed one another. I teach myself about writing through teaching others. When I articulate why a choice a student has made has certain effects, I learn that idea more deeply each time. Conversely, when I struggle with my own writing and I have a breakthrough, I am able to share that experience with my students in the classroom. I can say to a student who is struggling, “I struggled with something like that once. Here’s what happened and here’s what I did about it.”

Are you a short-story writer first and foremost? Why the short form rather than a novel?

I have taken most naturally to short-story writing, and it is where I have found success, in terms of publication. I always loved to read short stories, and reading them is probably what drew me to fiction writing as a career path. The short form mirrors my own perceptions of life. The important notions — love, loss, triumph, pain, and identity — are too big to comprehend, really. We can comprehend them only in flashes, in snapshots.

After that moment passes, we are back to thinking about the dry cleaning that needs to be picked up or the email we are supposed to send. What I love about the short story is that it singles out that moment with precision. The form itself — the reading experience it provides — is just a moment, too.

I finally did complete a novel that I like quite a bit called Twenty Questions, about two friends, 20 years apart in age, who are (unknowingly) involved with the same man. Two of the chapters have been accepted for publications in literary magazines as freestanding pieces. One has already come out and the other is forthcoming. I think the chapters are written a little like short stories. Maybe that shouldn’t be surprising!

What short-story writers have influenced your work?

There are many short-story writers I admire, but the ones whose work I revisit are Flannery O’Connor, Lorrie Moore, and Gabriel Garcia Marquez. I’m dazzled by the ways they find the humanity and the humor in flawed characters and sad situations. The writing, on a line-by-line level, is so highly crafted that I can revel in the sentences. These are so deft that sometimes the humor can come from a single word choice. It might be presumptuous to say these writers have influenced my work, but I can definitely say that I aspire to their levels of skill.

Your depiction of Baltimore is one of the threads that links the stories in Get a Grip. You write with such an honest eye. What about the city or your experience living there stirs such compassion and critique?

There are certain themes that have always preoccupied me — loss and grief, the tension between our needs for togetherness and for safety, and tension between life’s hilarity and its tragedy. I’m sure there are others, but these are some I can articulate. In Baltimore, I feel like these ideas play out more vividly and literally than I ever noticed elsewhere. It’s a place where people have suffered, and they have used that experience to figure out how to keep moving, to keep doing what they need to do.

My neighbor, [Orville], who was in his eighties, would sit on his porch for eight hours a day and stare into the middle distance. He’d been a mill worker, and he just relished every day of retirement. We had a secret friendship because his wife, also in her eighties, thought I might steal him away. If she were nearby, he wouldn’t talk to me, but would wink or blow kisses. A few days before he died, he told me it was going to happen, even though he looked the picture of health.

“I’m at the end,” he said. Then he nodded toward the inside of his house, where his wife and grandson were. “Tell them to cremate me and put me out with the trash.” Then he laughed. We both laughed. But I could tell he meant it. “I’m not sentimental,” he said.

I still see him standing there, his hands on the railing that separated our two rowhouses. To me, Orville summed up Baltimore — life is not easy, so don’t be too precious. Don’t take yourself too seriously.