An Interview with Jenni L. Walsh

On sifting fact from fiction with Bonnie and Clyde. 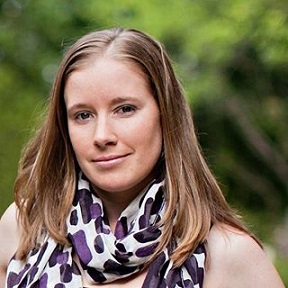 Bonnie and Clyde. If nothing else, the infamous names conjure a vague notion of partners in crime or no-holds-barred criminals. But, of course, there was more to the young bandits who captivated Depression-era America.

Jenni L. Walsh digs deep in her thrilling and thoughtful exploration of the last few years of Bonnie’s life. Side by Side is the second book Walsh has written about the pair, and it can easily be read on its own — though I suspect readers who do will find themselves scrambling for the first book, just to spend more time with Walsh’s captivating characters.

We emailed Walsh to learn more about what it was like to write Bonnie’s story.

Your heroine is a notorious criminal, but she didn't start out that way. Her transformation from "good girl" to wanted fugitive is fascinating and also incredibly well done. You really had to get into Bonnie's head in order to understand the twists and turns that took her to her infamous end. Were there any decisions the historical Bonnie made that you had trouble understanding or writing about after the fact?

At the onset of writing Bonnie’s fictional memoir, she was a large mystery to me because I found her actual historical figure varied greatly from her portrayal in film and television: the latter essentially as a cigar-smoking gun moll. While very much a criminal, Bonnie’s decisions were mostly survival-driven for herself, but even more so for Clyde — and others who ran with them. This devotion fascinated me but also baffled me.

There's so much myth about Bonnie and Clyde. How did you sift fact from fiction?

You know, I was surprised how much of Bonnie and Clyde’s lives and experiences were left out of the 1967 film. While the film was hugely successful, I don’t believe it captured the authentic duo. I relied heavily on the research and observations from historians and investigative reporters, along with family anecdotes, diaries, and memoirs. In some cases, I tried to use common sense. For example, there was an eyewitness who insisted Bonnie viciously kicked a man. However, by the time of the incident, Bonnie had a maimed leg and couldn’t walk. It seemed to me the eyewitness’ account was a bit fanciful, perhaps wanting his 15 seconds of fame. In my novel, Bonnie read about the incident in a newspaper, and reacted:

“That so-called witness is saying I turned him over with my foot. He clearly didn’t get a look at me. Did he forget to mention how I hopped on over on one leg? Did I levitate,” I say, my voice growing hysterical, “so I could flip him with my one good foot?”

You mention in your author's note at the end that Bonnie's poems in Side by Side were actually written by her. How did it feel to include her own words? Which poem of hers was your favorite?

The ability to include Bonnie’s written word made the novel, for me, more authentic, raw, and honest. The two main poems I played off of were written while Bonnie was in prison — grappling with “should I stay” or “should I go,” in regard to Clyde — and written a month prior to her death, allowing me to really dig into her emotions and thought process. The novel’s title was borrowed from the second poem, where Bonnie said:

Some day they'll go down together
they'll bury them side by side.
To few it'll be grief,
to the law a relief
but it's death for Bonnie and Clyde.

Tell us about the scene where the Barrow gang takes its iconic photographs by the car. I love how playful the scene is, even though the actual photos look a little menacing. How did you decide to set that up?

Bonnie griped at these photos — the most iconic of which is Bonnie smoking a cigar and holding a gun. From what I can gather, Bonnie and the gang took these photos for fun, to let off some steam, never expecting them to be seen. Then, the apartment in which they were hiding out was raided and the photos quickly reached the hands of the media.

At the time, photographs were just beginning to be transferred by telegraph. So — boom — those photos were printed in newspapers across the country, with salacious headlines. Bonnie was mortified. I found an anecdote where Bonnie and Clyde had taken a law officer hostage and, before releasing him, Bonnie made him promise to tell the media that “nice girls don’t smoke cigars” and that the photos weren’t representative of who she really was.

The rotating cast of characters in the Barrow gang is a delight — they're each unique and sometimes a little scary. Do you have a favorite?

Blanche. Hands-down, Blanche Caldwell Barrow — who was Clyde’s brother Buck’s wife. After reading her memoir, I fell in love with her. She was sassy and witty and at times nonsensical. It was actually Blanche’s voice that spoke to me first, and Bonnie’s voice didn’t fully form until I put her in dialogue with Blanche.

Bonnie and Clyde's relationship has a lot of heat but not much consummation. That makes for a really interesting dynamic between them. Why did you decide to portray it that way?

This is something Bonnie struggled with, and this element is part of Clyde’s evolution as a character. It all stems from Clyde’s background. While in prison, it’s said he was abused. It left a lasting effect on him.

I think it's hard to read Side by Side and not be amazed by the difficulties of Bonnie and Clyde's life on the run. They must have driven hundreds of thousands of miles over the years and slept in hundreds of different camps, motels, cars, and forests. So, last question: Do you have an escape plan?

I have to laugh because because I have a 2-year-old, a 4-year-old, and a puppy. So my escape plan would involve me running to and from the house because of a forgotten sippy cup, beloved stuffed animal, snacks, diapers… We’d be goners.

Carrie Callaghan’s debut novel, A Light of Her Own, is forthcoming from Amberjack in November.