An Interview with Dale Bailey

Monsters, both literal and of the human variety, are explored in the author’s elegant, literary horror fiction. 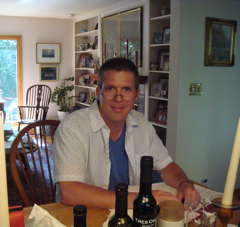 Dale Bailey’s recent collection, The End of the End of Everything (Arche Press/Resurrection House) is comprised of nine elegiac horror and science fiction stories that recall the work of Ray Bradbury. “The Blue Hole” is a Bradbury-esque tale of boyhood innocence lost, while “A Rumor of Angels,” a magical realist novella about a drifter in Dust Bowl times, alludes to Steinbeck.

The overtly science-fictional “Mating Habits of the Late Cretaceous” sets a crumbling marriage (think: Updike and Cheever) in a time-travel scenario. Other stories feature an ode to the old Universal monster movies (“The Creature Recants”); a feral Girl Scout troop (“Troop 9”); and a decadent end-of-the-world party (“The End of the End of Everything”). All the stories are shot through with poetic prose and carefully crafted characters.

Apocalyptic fiction is experiencing a kind of resurgence — from Margaret Atwood to “The Walking Dead.” Do you have any thoughts as to why? And why are you drawn to writing it?

The apocalypse is very much in the zeitgeist right now. I suspect it has something to do with the social anxieties of the moment, from dirty bombs to global warming. We live in an apocalyptic moment, and I suppose I’m channeling those anxieties as much as any writer is. It’s a particularly rich metaphor.

In the case of “The End of the World as We Know It,” I was writing deliberately about — and against — the kind of disaster-porn that seems so pervasive in our culture, but otherwise I was working in the dark.

I don’t think we know what we’re writing about until we step away from the word processor and take a look at it. My first collection was very much about fathers and sons, but I didn’t realize that until I put the stories beside each other. This one…apparently the apocalypse was on my mind.

A theme that I’ve noticed in some of the stories is the issue of gender roles and, in particular, masculinity (e.g., in “The Blue Hole,” the character’s sexuality is briefly alluded to, and in “Troop 9,” the feral scouts challenge traditional roles). What are your thoughts on gender roles?

I actually teach a class that focuses to some degree on gender, and I’m perpetually surprised at how resistant my rural, Southern students can be to any challenge to conventional gender roles — or even to the idea that these things might be socially constructed instead of simple facts of life. In “The Blue Hole,” I tried to imagine just how difficult growing up in such an oppressive (and repressive) environment is. Ditto “Troop 9.” I was thinking about what it must have been like when Rosie the Riveter got shoved back into the kitchen, and just how destructive the culture could be to people who challenged those norms.

“The Creature Recants” references the Universal monster movies. What are you favorite horror films?

I love the Universal monsters, but in the way you love a cute kid brother or sister. They’re not very threatening, are they? I think we tend to love the monsters we grew up on, so for me the great era of horror movies is the stuff made between say 1970 and 1985 — most of which I caught on VHS in the early 80s: the original “Texas Chainsaw Massacre,” the original “Night of the Living Dead” trilogy, “Alien,” “The Exorcist,” “Halloween.” But there are plenty of other great ones. I actually slept with the lights on after “The Blair Witch Project.”

A couple of pieces — “Mating Habits of the Late Cretaceous” and “A Rumour of Angels” — allude “classic” American literature. “Mating Habits” is as much Cheever/Updike as it is Bradbury, and “Angels” has a Steinbeck feel. Do the fantastic elements come first, or the characters/situations?

In most cases, for me, the fantastic element is a way of getting at or exploring character. The monster in “The Blue Hole” is as much about Jeremy’s hostility and resentment about the way his culture has rejected him as it is about…well, being a monster. But, yeah, the canonical allusions are hard to avoid. I cut my teeth on the canon in grad school.

Was the “Mutilation Artist” Veronica Glass based on anyone?

Veronica Glass wasn’t based on any particular figure, but I had in mind that kind of art that seeks some kind of violent confrontation with the viewer (or listener or reader or whatever) — think the films of David Cronenberg (speaking of horror movies) or a book like Crash by J.G. Ballard (filmed, appropriately enough, by Cronenberg). I think that kind of art has value, actually, but carried to the extreme Veronica Glass carries it — well, obviously she’s a monster, isn’t she? As for the inspiration for the story, it’s hard for me to say. It usually is. Stories often suggest themselves to me as titles — this was the case with “Mating Habits,” “Lightning Jack,” “Eating at the End-of-the-World Cafe,” and “The End of the End of Everything.” Then it was just a matter of tracking down the stories inside the titles. I wish I knew where stories come from.

Can you give us an update about your forthcoming novel?

It should be out sometime in the fall, but I don’t know when yet. It’s called The Subterranean Season and it’s about grad school, marijuana, Ezra Pound, mass murder, and college football, among other things. And I’m probably prejudiced, but I think it’s kind of funny.