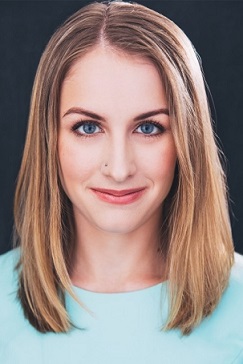 In Corinne Sullivan’s debut novel, Indecent, young teacher Imogene Abney gets the opportunity of her life when she’s offered a position at the Vandenberg School for Boys, a prestigious prep school in Westchester, NY.

Imogene, who has always been insecure around people, men especially, has been fascinated with the privileged world of prep schools her whole life. She jumps at the chance and, shortly after her arrival, encounters the popular and charming Adam Kipling (Kip to his friends). Unable and perhaps unwilling to withstand Kip’s flirtations, Imogene succumbs to an illicit affair that threatens her job, her career, and everything she’s worked so hard for.

In an email interview, Sullivan discusses her career as a writer and how the lines of consent and power can shift when gender roles are reversed.

When did you know you wanted to be a writer?

I honestly don't remember a time when I didn't want to be a writer. I was lucky to grow up in a home where my parents read to me early and often, and as soon as I was able, I made a desk of my parents' kitchen table to begin writing and illustrating stories of my own.

Tell me about your time at Sarah Lawrence. Was the experience there what you expected?

I applied to the MFA program at Sarah Lawrence because of its proximity to New York City, but I chose the program because of its faculty. At the open house, I still remember David Ryan's dissection of Mary Robison's short gem of a story, "Yours." He spoke with such incredible passion and insight, a quality I encountered with every professor I got the chance to learn from in the program. I couldn't believe — still can't believe, really — how much my professors and classmates cared about words and the art of putting them together. Despite the size of the program, I received more individual attention than I could have imagined. It wasn't a competition; everyone just wanted to improve and help others improve.

How difficult was it to transition from writing short stories to a novel?

When I started the daunting task of writing my first novel, I tried to imagine it as a series of connected short stories. The six linking short stories I'd written for my college thesis had been 15 pages each. I told myself that a novel was like writing 20 short stories, each its own entity, but a complete story once put together. Twenty stories, 15 pages each, 300 pages together — a novel. I'm starting to learn how to break from this rigidity, but it was essential for this task of creating my first novel-length story. I remember reading Sarah Lawrence MFA director Brian Morton's most recent novel, Florence Gordon, where he often has one-sentence chapters and all sorts of playful structural decisions and thinking, I can't wait until I'm confident enough to be able to do that. Maybe by novel number four.

How did the idea for Indecent come about?

First and foremost, I wanted to write a story about mental illness. I wanted to explore what happens when a young woman predisposed to depression and obsession becomes involved with someone who makes her believe she isn't worthy, a young woman who suffers and shrivels beneath the constraints society has placed on her. One of my best friends from college began working at an all-girl private school shortly after college, and so I began to explore how the dynamics might change if it were an all-male institution. In that way, the objective informed the plot and the story developed from there.

The novel explores positions of power and sexual harassment, among other things, in the academic world. Is power inherently tied to class and money in the novel?

In my experience, money and power are invariably linked, especially in the fictitious world of Vandenberg School for Boys. Money guarantees you a spot at Vandenberg, and if earn your way in with academic prowess rather than class, you're almost inevitably going to feel out of place. Imogene's attraction to wealth isn't so much what money can buy as much as what that monetary power represents: security and belonging. The boys at Vandenberg who come from money have never been denied anything before, and though they are still young, they assume that women are no exception. Power is inherently tied to class and money, yes, but I think also very much to manhood.

Imogene is a young woman filled with insecurities and inexperience. Is this what leads her to ultimately give in to Adam’s advances?

Until she meets Adam "Kip" Kipling, Imogene never believes herself to be desirable. To be pursued by someone with wealth and confidence is a fantasy too alluring for Imogene to deny. It isn't quite Kip himself that Imogene falls for; it's what his pursuit offers her, which is the chance to feel appealing and worthy in the eyes of someone powerful.

Is Imogene in truth powerless despite being in a position of authority in the school?

Imogene is never powerless. She always has the ability to say no to Kip, to command a classroom, to fulfill her obligations. What really prevents her from asserting her rightful authority is the state of her mental health. Imogene doubts herself, and this is only compounded by Kip's games. She allows her confidence to be contingent on Kip's response, and when his interest wanes, so does Imogene's belief that she is able to control anything, much less herself.

If the gender roles were switched around, would the outcome have been different?

Absolutely. There is an undeniable double standard — the older man in such a situation would be a predator and a felon, the younger woman a victim. Whereas in this situation, the younger man is a stud, the older woman just somewhat pathetic. That's not to say that Kip is the victim, Imogene the predator. Neither is excusable, and the situation is complicated by the fact that neither party quite acts their age.

What would you like readers to take away from the book?

I hope for readers to understand that it's not just men who change their mind who can damage a woman's sense of worth; it's the expectations imposed on women (and their perceived inability to live up to them). Though Imogene believes that Kip's attention (and the subsequent loss of it) is what informs her mental wellbeing, to me, it's important for the readers to see that she was never well to begin with. Kip cannot convince Imogene that her waist is skinny enough or her skin clear enough, and no person can convince Imogene that she is capable as a person until she believes it herself.

I have a draft of a second novel that takes place in Ireland and took me very much out of my comfort zone to write. I hope with each new novel to push myself a little farther and to see just what I'm capable of doing if I allow and trust myself.

[Photo by Amando Pinto and Jake Nathanson at SubUrban Photography.]