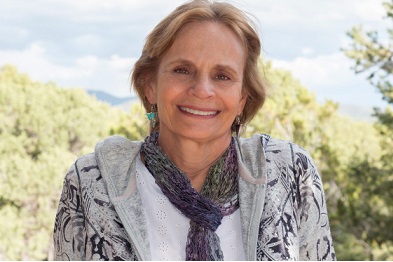 Anne Hillerman’s latest novel, Song of the Lion, starts with a car bombing that sends Navajo tribal policemen Jim Chee and his wife, Bernadette Manuelito, on a mystery that includes ecoterrorism, love triangles, and the majesty of the Grand Canyon.

This book, like Hillerman’s other two novels, Spider Woman’s Daughter and Rock with Wings, follows the story arc set up by her father, Tony Hillerman, who wrote 18 books about Jim Chee and his mentor, Joe Leaphorn, who solved mysteries on a Navajo reservation. Now, Anne Hillerman, who resides in Santa Fe, has picked up where her father left off and has become a storyteller in her own right.

You’ve written a lot about the Southwest as a journalist and now as a novelist. How does the landscape of the Four Corners impact your characters and plots?

My books are inspired by the beautiful landscape of the Four Corners, the Colorado Plateau, and, of course, the amazing geologic and environmental diversity of the Navajo Nation — everything from the iconic formations at Monument Valley to the high country of the Chuska Mountains and Narbona Pass. My Navajo characters consider this their sacred homeland, the place given to them by the Holy People.

As I develop my stories, I try to take readers to parts of the Navajo Nation’s more than 27,000 square miles they may not be familiar with, and places the series I am honored to continue has not yet visited. Writing about such enduring landscapes lifts my spirits. My father, who began the series more than 30 years ago, often said that a visit to the place where his story unfolded helped him move the plot forward. The same is true for me.

This book has an environmental slant to it. Has anyone compared it to Standing Rock?

No one has compared the proposed Grand Canyon development at the heart of Song of the Lion to Standing Rock as far as I know, and the comparison didn’t occur to me until you asked. In both cases, a variety of Indian nations oppose the project because of the detrimental effect on the environment and the threatened desecration of spiritual sites. In the reality of Standing Rock and the fictionalized Grand Canyon development I write about, the native objections are echoed by non-native environmental groups in a coalition of support. In each case, it’s a question of economic benefit vs. damage to the earth.

In an interview a few years ago in the Santa Fe New Mexican, you mentioned that you wanted to make Bernadette Manuelito into a full-fledged cop and not just Chee’s girlfriend. What did you discover as she became her own person?

Bernie has become more than just Chee’s girlfriend/wife. She operates as a full-fledged team member, a woman who stands on her own two feet and speaks her mind. Although she is greener at solving a crime than Jim Chee or her mentor, Joe Leaphorn, she’s smart, tenacious, and intuitive. She also drinks too many Cokes, doesn’t eat her vegetables, and has an irrational fear of dogs.

What do you have planned next for Chee and Manuelito?

In the next book, Bernie gets involved in the case of an outdoor guide who disappears while searching for a lost girl. Chee, in Santa Fe for additional training, runs into an ex-con with a bad attitude and learns a disturbing secret. As we all know, nothing in life or in fiction ever stays the same. After all, that’s why they call these books mysteries.

You have been praised for being prolific. What are your writing habits like?

I take writing seriously, but I have great fun with it. When I’m developing a new book, I use an idea I borrowed from the wonderful David Morrell, a thriller/mystery author and the creator of the Rambo character. I write a letter to myself talking about the new book’s plot, who the bad guy is, and the motivation for his evil act, underlying themes I hope to explore, and what role each of the three main characters will play.

I walk with my dog every morning before I start to write and use that time to think about what I want to accomplish that day. I work on my book every morning. I try to spend at least four hours a day at the computer when I am in that first-draft phase. When I hit a dead-end, I switch to research.

The story comes to life during the rewrites. In that phase, I can work longer days. But I try to not write after 7 p.m. All that mental activity makes it hard for me to sleep.

What advice would you give to yourself as a young writer?

I’d say the world needs all the stories we can tell. Keep going. You have to write to become a writer. Read voraciously. Hang out with people who believe writing matters. Go to conferences, workshops, and take classes where people will tell you the sweet and bitter truth about what you’re creating. Creating something as good as you want it to be takes focus and hard work. Be self-critical, but don’t let that paralyze your creative energy.

A discussion with the author of Vulture Peak