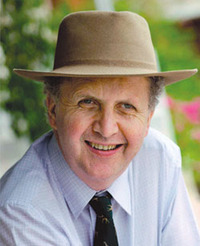 Alexander McCall Smith is the author of countless bestselling books (both for adults and children) and three series. The Novel Habits of Happiness is the latest in his popular Scotland-based Isabel Dalhousie series, also known as the Sunday Philosophy Club. In this installment, protagonist Isabel comes to the rescue of a 6-year-old boy with vivid recollections of a past he is far too young to remember.

So what if the tea gets cold? Keep reading.

Do you and Isabel have conversations?

Not really. I sometimes think about what she would do in a particular situation, or about what she might say, but we don’t have actual conversations.

Will the Dalhousie series catch up to the No. 1 Ladies' Detective Agency series in popularity?

I don’t know. Isabel certainly has her followers, and many of them also follow [No. 1 Ladies' Detective Agency character] Mma Ramotswe. From my point of view, the important thing is that there are readers who seem happy to immerse themselves in Isabel’s world and feel that they know her.

What is it that makes you sit down to write one or the other?

It’s really a question of turns: Once I have finished writing one series, it is the turn of another series to be at the head of the line, so to speak.

Have you ever written them into similar situations? Will they meet? Say, Precious Ramotswe travels to Scotland?

They tend to encounter rather different problems, and so I have not given them common situations. I don’t think they will meet, although I suspect they would get on fine. Scotland would be a bit far away for Precious.

Isabel and her husband, Jamie, have W.H. Auden verses seemingly at their fingertips; they speak poetry to one another. Are your characters based on real people or prototypes that you wish existed?

That raises interesting questions. I think that characters have to be credible. That does not mean, though, that they cannot embody characteristics that we find attractive or impressive. I have certainly known people like Isabel and Jamie. At the same time, however, there is an aspirational aspect to fiction. I think that my books probably reflect the wishes that many (including myself) have for a world that is less confrontational and gentler than the world tends to be.

If you had a bump on the head and woke up as one of your characters, which one would it be and why?

Isabel, I think. Her life is a pleasant one. She has time to do philosophy.

What do you think is the most obvious difference between American and British writing?

I find it difficult to generalize about this. There are so many different sorts of American and British writers. British writing can be more whimsical, perhaps, although contemporary British writing shows a certain tendency to revel in the crude or the insensitive — a tendency to cynicism. Scottish fiction has an issue in that it can revel in our miserable streak and can be intolerant of anything that deviates from that. In fact, literature should embrace as many worldviews as possible. There is a place in literature for a wide range of reactions to the world.

In the story, Isabel mentions that one needs imagination to be truly empathetic. I agree, but imagination is also like the moon; it shines over anything. Imagination must figure somewhere in the minds of serial killers, too. How could it be harnessed for good and good only?

That’s a very important point that you raise! You are right about the ability of imagination to be a negative or positive force. This is where moral imagination comes in. Increasingly, philosophers recognize the role of moral imagination in moral decision-making. Moral imagination is something that can be developed, in childhood, through literature. Children’s books enable young people to understand the experience and perspective of others. I think we should be very aware of the formative power of early cultural influences. Computer games that involve shooting and destroying things must have a baneful influence on young minds. Then we complain about the violence of the world, but what can we expect?

You have more time to tell your story when your character is beloved. What kind of freedom has a built-in audience provided in your writing?

The fortunate success of the books has enabled me to write what I want to write. I am most grateful for that.

Is there ever less freedom when you’re forced to deliver?

Not really. I don’t think I’m forced to deliver — I’m encouraged, but I tend to make the suggestions as to what I do next.

Do you take more liberties now than when you first started writing?

In some senses, yes. I can go off at tangents if I want — and I do tend to do that. At the same time, I am very much aware of my readership and the compact I have with them. I would never wish to distress or disappoint them.

I think, indeed, you can have a sense of the sacred without being religious. Religion, though, gives people the opportunity to express that sense of the sacred, and that is the route that many care to follow. It is, I think, a bit more difficult to celebrate the sacred without some sort of ritual observance, but it is, of course, quite possible. What I try to convey in some of my books is the sense of awe or mystery that can be experienced when we allow ourselves to be entranced by place, moved by friendship or love, or simply struck by beauty in art or in the world.

There is an underlying morality in your work that probably makes many readers want to live in your village. Is it simply a part of your character or part of the purpose of your books? And could you blame anyone for wanting to live in Edinburgh, especially in August?

I do not have an agenda, so to speak. I write about people and qualities I admire. I do not match up to these people personally — I am as flawed as everybody else! But I do like to contemplate the lives of those who somehow embody the positive and the good. As for Edinburgh, yes, there are aspects to it that are very attractive, and I am always very pleased when people see its positive side. I am very pleased that people visit the city in order to see the world of Isabel or the world of the 44 Scotland Street books.

“Lumbering minds and conversation in the café cooled the coffee.” Maybe lumbering is an unending human preoccupation. Are many of our habits pre-programmed?

I suspect they are! There is a lot in our lives that is attributable to our genetic inheritance. Yet we still have some room for freedom of choice and self-determination. If we reject freedom of the will, then the world would be an arid, pointless place.

Isabel's lessons in thinking charitably would be good for us all. How would you do it? Is it simply a matter of censuring oneself?

We have to remind ourselves of our need to love our neighbor, irrespective of his or her faults. Doing the right thing requires constant awareness. Isabel brings herself up short when she is aware of the fact that she is about to be uncharitable. I suspect all of us do that from time to time.

Could a sexual fantasy be considered charitable thinking? If so, does it naturally follow that men are far more charitable than women?

I don’t think that a sexual fantasy could normally be considered charitable — indulgent, maybe, but not charitable. I think you have your tongue in your cheek on the male/female issue here! I think that male and female charity takes different forms — sometimes, but not always. I think that women are more sensitive to the claims of those for whom they are responsible. Men may not feel those claims so strongly. I am not sure if that is borne out by any psychological research. Probably not. Charitable actions, of course, are closely connected with moral imagination.

Unrealistic and romantic are much the same thing, according to Jamie. Do you believe that’s true?

No. Characters in fiction must be able to say things that the author does not endorse. I often agree with what my characters say, but not always.

An Interview with Maria Chaudhuri

Growing up in Bangladesh, Maria Chaudhuri burned with a passion that separated her from her family. As she matured, the author came to understand her desires as an inheritance from her loved ones — whom she still struggles to understand.