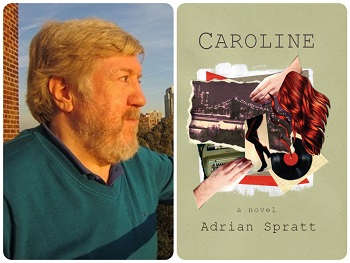 I met Adrian Spratt nearly 20 years ago, at a writing workshop led by novelist Lore Segal. The workshop was in Lore’s living room in her Upper West Side apartment; about a dozen of us sat in a large circle around her elegant presence. She rose from a deep armchair at the end of each critique to hand our stories back to us.

The respect with which she treated our work helped create the atmosphere in which my friendship with Adrian was born. His story was precisely about the value of friendship. In it, a college student named Terry models for a sculptor, Len. Tension develops because Len emphasizes one of Terry’s qualities: He is blind. Terry objects:

“Len,” I said, leaning forward again, “can’t you understand? I’m the only blind student — only blind anyone — at this college. A picture of me with my eyes closed will forever mark me as the epitome of blindness. Years from now, my classmates will see my photograph in a newspaper, and their first thought will be, oh yeah, the blind guy.”

That story has a central place in Adrian’s first published novel, Caroline, which takes on the question of how relationships evolve by looking at what happens when the main character’s lover slips into madness. The book is one of the few in the mainstream written by a person who is blind, about a character who is blind. In our representational culture, it seems, disability is one of the last frontiers.

How did you come upon the story in Caroline?

It was based on my own experiences in the early 1980s. But there was no cohesive story there until, one morning, I woke up with a dream and I sat down and wrote. Whatever the dream was, it inspired the prologue. I wrote the novel in about a year, around 2013 and 2014. I sent it out to an agent or two. Then, I gave it to an editor, Charis Conn, who was an editor at Harper’s and who had also been David Foster Wallace’s editor. She helped pull the novel together. She suggested ways in which I should expand and things I might want to cut it out. At this point, I’d sort of given up on the idea of getting it into the mainstream world, but I felt encouraged by Charis.

Is there a scene that was particularly difficult to write? How did you untangle it?

At least four subjects in the novel are, or once were, taboo: disability, death, abortion, and sex. I hope I’ve shown it’s possible to write about a disabled person without engendering pity or cheap inspiration. Our response to death, to grief, has long been a subject of fiction, but it’s no less hard to write about. Abortion is the subject of polemics, but I hope the novel goes beyond right and wrong by revealing decisions and emotions nonjudgmentally.

That leaves sex, supposedly no longer taboo, but for me the most difficult. Because just about all contemporary artists feel compelled to portray sex, and because critics require that they do so, such scenes have become prone to banality. Besides, unless treated with great sensitivity, they’re cringe-inducing. Yes, I’m squeamish about spying, as it were, on other people’s very private activities. How, then, do I untangle my reservations about writing such scenes? I find I write them lightly or skip past them during early drafts. Only when I think I understand the characters’ emotions and the scene’s purpose in the story do I try to give them life.

Why did this work turn into the novel you most wanted to publish? And how much was its disability theme part of that?

This is actually the fourth novel I’ve written. I wrote a first novel, and then I didn’t want to be a one-novel person. I wrote a second novel. Later, I wrote a third novel. But I felt like this story would have some resonance for mainstream readers. There has been exactly one novel where the protagonist was blind, and the author is blind. I feel there’s a gap. But I didn’t set out to write such a novel. I want disability to be secondary to the major themes. One of the things that I’ve thought about is educating people who aren’t disabled about how disabled people can function in a visually oriented society. There are all these rah-rah disabled books. There are heroes, like the man who swam around New York City. Then there are the rest of us. And we can still manage it.

Give me an example of what you’ve had to think about in writing Caroline for a mainstream audience.

The question is how do I create a character who can’t see who is narrating a story to a mainstream audience? A writer might write, in a scene in any given novel, “He smiles.” If I had my blind character say, “She smiled,” my writer colleagues and maybe some audience would question it. “How can he know that she smiled?” I could write, “He could tell from her tone of voice that she smiled.” But it’s a long construction. What I need to do is use the long construction one time and then get the reader accustomed to moving in [protagonist] Nick’s world. The second time around, I’ll say, “She smiled.”

The character Nick spends very little time dwelling on his lack of sight. Is that true of you, too?

I think about it [but] not all the time. I think about it in different ways as I’ve grown older. I don’t want to dramatize the notion of trauma when it comes to losing a sense. But the fact is that it is traumatic. I was considered partially sighted as a child, and my whole imagination is visual.

I got a shadow in the corner of [my] eye one day in September of 1967. Two days later, my parents took me to the hospital. I spent much of that time — months — having to lie absolutely still. I was the only boy on the ward, which was quite large. There were two men who were there. Both were scientists. One guy was remarkably well adjusted. One was fighting like crazy. Both took me by the hand and somehow made the process not as a traumatic as it should have been.

I was released from the hospital on Jan. 23, 1968, and my family moved to the United States [from England]. It was the first time I’d ever been on a plane. I had one more operation in March in New York, which unfortunately ended what vision I had.

There was a lot of adjusting to do. Initially, I handled it quite well. But there were things — for instance, when I got to Amherst, all the people teaching English 101 did not want me in their class. But by the time I was in my 30s…I did see a therapist. People [who] go through traumas in their childhood tend to have this crisis in their 30s, I’ve been told. Then some things happened that helped me out of that phase. One of them was meeting my wife, Laura.

What are you happiest about with Caroline?

Depending on the day, I might answer differently. Lately, I’ve come back to this sentence about hope near the end of the novel: “Possibility has settled into something akin to belief, though one I keep to myself, safe from argument.” The novel doesn’t make claims for or against spirituality, never mind organized religion, but the passage from which this sentence is taken suggests an experience somewhere between rationality and faith. In a society split sharply between science and religious dogma, we need expression for a space that doesn’t purport to have all the answers.

Elizabeth MacBride is an award-winning journalist, writer, and author who creates spaces for people to tell their stories. She has written about the fisherwoman of Gaza, the grandchildren of genocide survivors in Cambodia, and guns-rights separatists in northern Idaho. Her book, The New Builders, is about the changing community of small business in America. She has written or edited for Quartz, Forbes Magazine, Atlantic.com, Stanford GSB, CNBC, HBR.com, BBC Capital, Advertising Age, Newsweek, and many others. Her stories have been viewed by millions of people worldwide and translated into languages including Arabic, Turkish, and Armenian. Recent stories of note include the viral “Why Venture Capital Doesn’t Build What We Really Need” and “How I Learned to Take My Breasts to Work.”

Here we are, two months in, and what of our newly minted New Year’s resolutions? Have they reverted back to good intentions? If you had five tools to turn from bad habits to good ones, could you convince yourself to use them?