Am I Too Blue? 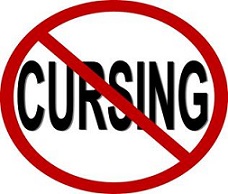 I almost fell off my barstool when I read the New York Times' lead story on the Donald Trump tapes. The Times actually printed the words he used! Seeing “f--k” and “p---y” without the dashes on the front page of the Gray Lady made her seem somehow less, well, ladylike.

Okay. I wasn’t on a barstool. I’ve just always wanted to say that. I read the digital edition of the Times on my computer in the safety of my home. In the bars I visit in Naples, FL, where the parking lots are full of cars with “Make America Great Again” bumper stickers, reading the Times would generate a fusillade of bullets.

Don’t worry. This column really is about writing, or rather, cursing and vulgarity in books, especially thrillers.

Obviously, blue language is inappropriate in some books. Children’s books, books about Mother Teresa, and cookbooks come to mind. There may be bad words in historical fiction and romances, but they are usually spelled in Old English so the reader can’t tell if they’re curses or something to eat. (I’d love to see an Old English cookbook.) Not that romance novels can’t be steamy — the protagonists are often just too busy ripping off bodices and throbbing to curse.

But when writing a modern thriller or mystery, it is all but impossible to avoid cursing. Even “nice” people occasionally use bad words (if there is any such thing as a “bad” word). I’ve mentioned in this space that one of my favorite authors, J.K. Rowling, is a veritable potty-mouth in her Cormoran Strike crime thrillers, which she publishes under the pseudonym Robert Galbraith. She obviously couldn’t use curses in her Harry Potter novels, so I think she’s over-compensating. Of course, anyone who has been to England knows that the F-word is more ubiquitous than fish and chips.

I myself try to use vulgarity sparingly. I like to pace myself. Curses are especially funny for their shock value when a “nice” person lets one go.

Villains, of course, are expected to turn the air blue, especially when they’re acting villainous.

The thug turned on me with a snarl on his face and gun in his hand. But I was quicker than a used-car salesman’s smile. My shotgun roared, and scores of double-ought buckshot pellets, each capable of stopping a rabid grizzly, caught him square in the groin.

“Oh, fiddlesticks,” he said, grabbing his crotch and crumpling to the floor.

Doesn’t quite work, does it?

Now, here’s a hint. When, as a writer, you are “hiding” a villain in plain sight, make sure he or she doesn’t curse and give the game away too early. It’s the sudden change in character that later provides a villain some gravitas.

Of course, for a writer like myself who reads a lot of thrillers, this is a double-edged sword. The nicer the characters in the books I read, the more suspicious I am of their motives. Put Mother Teresa in a thriller, and she rockets to the top of my suspect list!

My advice: Unless you’re in Great Britain or running for president, avoid gratuitous obscenities.

Lawrence De Maria, once a Pulitzer-nominated New York Times reporter, has recently released his 17th self-published novel, Shadow of the Black Womb, an ALTON RHODE mystery, on Amazon.com. His books are available at ST. AUSTIN’S PRESS (BOOKS BY DE MARIA). He only curses when he sees his sales figures.