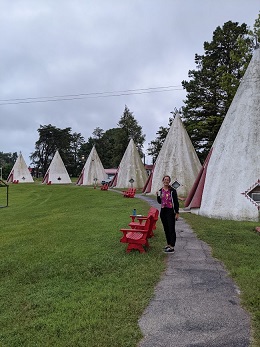 We had to make El Paso in time for Martha’s first day of work, right after Labor Day.

Car-packing is my husband Harry’s superpower; he’s a former college hunk hauling junk. He packed our daughter’s rented Chevy Malibu solid: big boxes, mostly books, bags of clothes, and two bikes strapped to the trunk. I squeezed in my laptop and overnight duffel. Not a crevice for a book bag!

I don’t suffer from fear of missing out; it’s more like terror over having nothing to read. Sure, there’s e-readers, but I crave paper. On my first cross-country trip, at 7 years old, I read a Scholastic book-order stash of Beverly Cleary. Decades later, rolling across on Amtrak, East of Eden. So, asking George Eliot’s forgiveness, I ripped the remaining chapters from Daniel Deronda for this trip, leaving 600 completed pages and three other books home in Washington, DC.

Harry waved us off, Martha at the wheel. We’d re-routed to avoid Hurricane Ida’s path onto a more northerly course, a hair longer, older roads. Two-thousand miles and 30 total hours driving, give or take: Maryland, West Virginia, Kentucky, Tennessee, Arkansas, and all of Texas. El Paso in three days or bust.

We paced ourselves, each of us driving a few hours at a hitch. Not a seasoned long-hauler, taking the wheel the first time felt like driver’s ed to me. Martha coached me on the smart Malibu’s bells and whistles. By the time we switched again, I’d fallen into the rhythm of the road.

We kept the pedal to the metal, bypassing temptations as if lashed to the mast with wax-plugged ears. We resisted a tour of the Trans-Allegheny Lunatic Asylum in West Virginia, abstained from even one restorative nip at the bourbon-tasting rooms dotting the rain-soaked Bluegrass State.

We approached Cave City, Kentucky, at dusk. Mammoth Cave’s all-day tour and underground cafeteria is the stuff of family legend. Driving cross-country in the 1960s, with “only” eight starter kids, my parents-in-law stopped there. Now, the fabled caves were closed for the night. Anyway, we wanted beds, not bats.

Martha Googled. “Sleep Outside the Box. Wigwam Village 2. Eleanor Roosevelt visited in 1937” popped up. We called, booked a double wigwam, picked up burgers to go in Cave City.

Night and drizzle fell; a semi-circle of wigwams materialized by the side of the road, a shrine to kitsch. Our host showed us to Wigwam 8, explaining its patented concrete-and-steel technology, apologizing for historical inaccuracies and cultural appropriation, describing the restoration process begun last year. Quite the pandemic fixer-upper! We wanted to hear more, but the hamburgers were getting soggy.

En teepee, we curled up in original hickory twig bedsteads, snug as Goldilocks. I could have left Daniel Deronda behind; all I wanted was lights-out.

Soon after daybreak, fueled by a truck-stop breakfast of eggs, sausage, and biscuits swimming in gravy, we hit the road. We cruised for 12 hours through Kentucky, Tennessee, and Arkansas. Mindful of our timeline, we white-knuckled past the billboard for Dollywood.

Thanks to my deejay daughter, Dylan sang us around the Nashville skyline on toward Memphis, where we grimly ignored the sign for Graceland. We blasted past beckoning neon somewhere in Arkansas: “Fear God, Seek Truth, Eat DQ.”

Finally, East Texas! We spent the night in Mt. Pleasant, neither particularly mountainous nor pleasant, but the swimming pool was hot-tub warm, consolation for bypassing the hot springs of Arkansas.

El Paso is on the Mexico border. Day three was all Texas: hours of plains growing oil rigs, and flatbed trucks apparently loaded with streamlined, Brancusi-esque dinosaur bones (wind-turbine blades, we think). NPR was all Texas, too: the Supreme Court abortion decision. Long day’s journey into, well, you know.

We crossed the Permian Basin and drove west under enormous sky and corrugated desert bounded by the jagged blue spine of the Davis Mountains, originally the Limpias. Glorious, spirit-lifting landscape.

The sun was setting as we entered El Paso. “The Wall, Mom,” Martha said, familiar with it from reporting in Mexico. I gaped at the towering fence as my confused phone welcomed me to Mexico. The elevated highway curved and looped away. We exited, crossed railroad tracks, and turned into a neighborhood of bungalows at the foot of the Franklins.

At 7 p.m. local time, after three days of traveling in present-tense, forward motion, we pulled up to the address we’d programmed two-thousand miles earlier.

A Stitch? In Time.

On the slow, methodical progress of sweaters and stories.