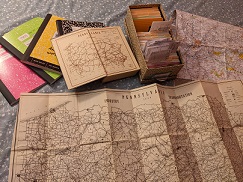 The fiction I love to read — and write — is rooted in place and driven by character. My novel-in-progress is set in southwestern Pennsylvania, near the old farm that has been our summer home for years. The specific prompt this time was a late-19th-century landscape of the region, a forest scene of deep green shade and a rushing, rock-strewn creek I saw several years ago in a local museum near where the artist painted.

Viewing it, I looked back about 150 years, saw through the artist’s eyes a familiar but wilder natural world. The original inhabitants, Native Americans, had already been displaced and dispossessed. Not long after the artist painted, towns and industry would grow, roads would replace rails, logging would further deplete first-growth forests, and mining would disturb mountains, streams, and farmland. It was an image of a natural world on the cusp of change.

The painting lingered in a corner of my mind like the haunting after-image of a dream. Upon completing my second novel, I remembered it, wondered about the artist, and began to research, imagine, and write. But not until last month, when I taught a workshop on ekphrastic writing — writing inspired by visual art — did I recognized what should have been plain all along. (Yes, I didn’t see the forest for the trees.) That painting glimpsed years ago has acted as a slow-release ekphrastic trigger for my current novel.

A cast of characters real and imagined, some from the 19th century, some the 20th, has assembled, stepped out from the frame of that scene. Rehearsals have begun; the draft chapters I type on my laptop. I need my fingers tapping the keyboard to compose but use a parallel handwritten process, too. I keep notebooks, drugstore composition books with marbled covers, as a running record of where the story is, where it’s heading, what I’ve discovered, what’s stumping me. I also keep notes on index cards stashed in a portable cardboard file box with tabs for categories.

One section is “Field Trips,” necessary excursions, a bit like playing hooky with a purpose. After hiatus during the acute pandemic, I’m back on the road.

That’s how I found myself house-hunting in a southwestern Pennsylvania town on a chill, breezy, not-quite-spring morning. Not for myself: I swore off the habit when we downsized to an apartment. Rather, house-hunting for my novel’s 20th-century characters. Notebook in hand, I explored a neighborhood at the crest of a steep hill block by block, house by house. Taking pictures, jotting down details.

Paydirt! I found the perfect house for an important supporting character. Just as I’d imagined, writing away back in Washington, this well-established man lives in a big brick Victorian. To my surprise, from his back windows upstairs, he has a view of the college on a nearby hillside.

But what about one of my protagonists, a young woman moving to town? Her imagined bungalow did not yet exist. I slowed, stared at every house. A contractor called out, “Is everything alright, ma’am?”

He shrugged. “Yeah, this part of town’s historic.”

Next came a block of modest frame Victorians clinging to shallow lots at the edge of yet another steep slope. Would one work?

Too small and close together to suit her. Among her inducements for moving and gambling on the new job was more living space than in the big city she was leaving behind. Discouraged, I walked on.

And there it was! Holding down a prime corner lot on the hillside, a dilapidated, gothic Victorian — clearly too big and demanding for its owner to manage. Easy for me to install a cluster of mailboxes by the door, multiple electric meters, break the once-grand house into apartments. My protagonist could rent the whole top floor, have a balcony under the eaves instead of a sunporch. She’d lose the little yard I’d given her but gain a view of the town and surrounding mountains. And could walk to work along a convenient alley.

One more house still to find, this one for the colleague who may, if it works out, become her boyfriend. Bingo! Right around the corner, a tidy white Cape Cod with double dormers upstairs — his work demands light — and an attached garage for necessary storage.

I returned to my car, surprising a hawk in the tall grass by my parking spot. Maybe nest-hunting, too? Shunning the turnpike, I drove home along a state road still bordered in stretches by forest. Rolling down my window, I could sometimes hear the stream beyond the trees. And if I blinked, I could almost be driving into the painting, the landscape, that inspired this mission.

[Editor's note: Ellen Prentiss Campbell will speak at this year's Gaithersburg Book Festival on May 21st in Gaithersburg, MD.]

The perils and pleasures of wanting to learn a language.