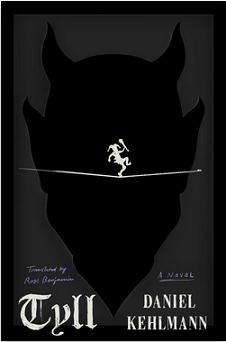 For the inhabitants of rural villages, life is fraught with uncertainty. Crops fail, neighbors are treacherous, farmhands and millhands steal and might even try to kill your children, plagues decimate entire regions, bandits lurk in the shadows, wolves threaten, and soldiers — either Catholic or Protestant — sweep through towns, raping, plundering, and massacring.

To protect yourself, you need to know the right incantations and possess the right amulets, but even then, there are no guarantees. If inquisitors suspect you of practicing magic, they will try you in a sham trial, hang you, and then burn your body.

Tyll is the son of a miller, Claus, but neither he nor his father is particularly interested in grinding grain. Tyll would rather spend his time learning tricks such as juggling and tightrope-walking, while Claus, an intellectually curious but uneducated man, collects books he can’t read and ponders unsolvable problems, such as how it can be that two apparently identical leaves are actually different objects. He also knows about chants and charms.

Early in life, Tyll survives two perilous situations. First, Sepp, a millhand, throws him down a gorge into the water in front of the mill. Then, Agneta, Tyll’s mother, abandons him in the middle of the forest when she suddenly goes into labor. From then on, survival becomes the driving force in Tyll’s life.

When Dr. Tesimond and Dr. Kircher, two Jesuit inquisitors, arrest Claus for witchcraft, both Tyll and Agneta testify against him to save their own skins. Then young Tyll takes off with a neighbor, Nele, to become an itinerant performer and jack-of-all-trades. At first, the children join up with experienced road people, learning all they can from them, but when their masters turn out to be too simple-minded or too cruel, they run off and start their own circus.

Their adventures take them all over the Holy Roman Empire. Eventually, they wind up serving Friedrich V, the “Winter King,” who ruled as king of Bohemia from 1619 to 1620 (one winter), and his wife, Elizabeth Stuart, daughter of James I of Scotland. Much of the humor of the novel derives from the obsession with protocol of Friedrich and Elizabeth, the latter of whom Tyll, with the liberty afforded court jesters, addresses as “Little Liz.”

A Calvinist convinced of his divine right to rule, Friedrich meets with the king of Sweden, Gustav Adolf, to convince him to conquer Bohemia for the Protestants and return it to him, Friedrich. A rough, no-nonsense military commander, Gustav Adolf serves as a foil to Friedrich’s high-minded idealism. Friedrich’s first concern is that Gustav Adolf has kept him waiting, which is not only an affront, but a transgression:

“How one behaved toward other royal personages was not at one’s discretion, it was governed by strict rules. The crown of Saint Wenceslas was older than the crown of Sweden, and Bohemia was the older and richer of the two lands, thus the ruler of Bohemia enjoyed seniority over a king of Sweden.”

The Swede, on the other hand, just wants to shut Friedrich up and get on with the war.

The same obsession with protocol comes into play when, years later, Elizabeth visits Osnabrüch, where the Peace of Westphalia is about to be signed, putting an end to the Thirty Years War, to secure the crown of Bohemia for her son. There, she endures countless insults. First, a dignitary addresses her as Your Highness, “which meant that he…did not recognize her as Queen of Bohemia, for otherwise, he would have to address her as Your Majesty.”

This dignitary offers her refreshments, although visiting monarchs are supposed to be considered masters of the house, not guests. In order to avoid his inviting her to sit down, she darts to a stool, only to realize that this is an entirely inappropriate seat for a queen. Finally, she leaves, dejected, to spend the night in a shabby inn.

Unlike the royalty, Tyll is neither idealistic nor sentimental. He is a survivor. When Nele, his companion of many years, leaves him to marry an unattractive but financially secure suitor, he understands her motives and does not object. Later, when Elizabeth invites him to accompany her to England, where she can offer him a comfortable retirement until he dies “in his bed,” he answers that he prefers “not dying.”

Two leitmotifs in Kehlmann’s works are the German obsession with intellectualism and the evanescent nature of fame. His novel Measuring the World caricatures two of Germany’s greatest thinkers, Alexander von Humboldt and Carl Friedrich Gauss, while Me and Kaminski and F spoof the art world, especially the power of critics to make or break a painter’s reputation.

In Tyll, translated by Ross Benjamin, Kehlmann revisits these themes. Today, the Jesuits Tesimond, known for his involvement in the Gunpowder Plot, and Kircher, author of treatises on myriad subjects, are nearly forgotten — although, at the time, many believed that “as long as the world existed, people would read Athanasius Kircher.” But Kircher is a fraud. He admits to Tyll that his tracts are filled with lies.

Through the amassment of fabrications, folk beliefs, and misunderstandings, Kehlmann’s Tyll throws into question the very accessibility of history. A character known as “the Fat Count,” who is writing a history of the period, simply makes up what he can’t remember. How much of what we think we know about 17th-century Germany, asks Kehlmann, is simply a construct?

More a series of vignettes than a coherent narrative with well-developed characters, Tyll is a thought-provoking portrayal of an elusive period. Today’s readers, concerned with covid-19, military build-ups, and an unstable political situation, will find many parallels with their own time.

Bárbara Mujica, a professor emerita at Georgetown University, is a novelist, short-story writer, essayist, and scholar. Her latest book, Religious Women and Epistolary Culture in the Carmelite Reform: The Disciples of Teresa de Ávila, was just published by Amsterdam University Press and deals in part with the Thirty Years War. Her novels include the international bestseller Frida, based on the relationship between Frida Kahlo and Diego Rivera, Sister Teresa, based on the life of Teresa of Ávila, and I Am Venus, which explores the identity of the model for Velázquez’s Rokeby Venus. Her collection of stories, Far from My Mother’s Home (Spanish edition: Lejos de la casa de mi madre) focuses on the immigrant experience. Collateral Damage, to be published next spring by The University of Virginia Press, is an edited collection of women’s war-writing, and Imagining Iraq, also due out next spring from Living Springs Publishers, contains short stories told from the perspective of the mother of a veteran. Mujica has won several prizes for her short fiction, including the E.L. Doctorow International Fiction Competition, the Pangolin Prize, and the Theodore Christian Hoepfner Award for short fiction. Three of her stories and two of her novels have been winners in the Maryland Writers’ Association national competition. I Am Venus was a quarterfinalist in the 2020 ScreenCraft Cinematic Novel Competition.