12 Good Books to Pass Along

It’s national Give Something Away Day! In honor of this dubious holiday, here are a dozen titles worthy of being shared. 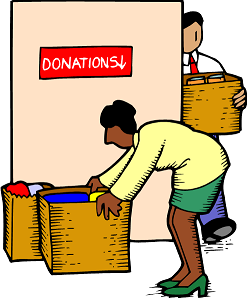 The Street by Ann Petry. “I should give away plenty of books on my shelves, or maybe focus on the ones that have spilled over onto the floor. However, I get a special lift from giving people Petry’s The Street, an eminently readable novel that is not read enough.” ~John P. Loonam

The Good Man Jesus and the Scoundrel Christ by Philip Pullman. “In this short but fascinating novel, Pullman hypothesizes that the heart of Christianity lies not so much in a trinity as in a duo: Twin brothers named Jesus and Christ. By separating church theology from the simple story of Jesus, as well as by addressing inconsistencies in the Gospel narratives, Pullman offers his readers a serious theological exercise which is both moving and illuminating.” ~Amanda Holmes Duffy

All Quiet on the Western Front by Erich Maria Remarque. ~David Bruce Smith

Beneficence by Meredith Hall. “Don't make me do it, since I really don't want to part with this one, but I want everyone to know about it and read it. Hall's debut novel came out last summer in the pandemic hush. I read and reviewed it, and it may be my favorite book of 2020. It's a family story set on a Maine farm and has both joy and sorrow in it. Think Charlotte’s Web. Think love and loss and endurance. Ordinary, extraordinary transcendence.” ~Ellen Prentiss Campbell

Country Music: An Illustrated History by Dayton Duncan and Ken Burns. “The stories and photos of iconic country-western performers and songwriters are every bit as good as their music.” ~Talmage Boston

The Devil in the White City: Murder, Magic, and Madness at the Fair that Changed America by Erik Larson. “I curate my bookcases meticulously so I don’t have to make this kind of decision! That said, I do have an extra copy of this one on hand so I can lend it out without fear of losing my own.” ~Mariko Hewer

Sufism: An Introduction to the Mystical Tradition of Islam by Carl W. Ernst. “It's important to me that people see Islam as more than just the threat of ‘sharia,’ the external law. ‘Haqiqah’ is, according to Ernst and the Encyclopedia Britannica, the internal path to ‘the knowledge the Sufi acquires when the secrets of the divine essence are revealed to him at the end of his journey toward union with God’ — a worthy, mystical study.” ~Y.S. Fing

New and Selected Poems by Mary Oliver. “To share as a treat, not give away.” ~Ronald Goldfarb

Roget's College Thesaurus. “I spent 20 minutes staring at my bookshelves. I'm keeping them all. Maybe one of my copies of this one I can spare. Maybe.” ~Caroline Bock

Dreyer's English: An Utterly Correct Guide to Clarity and Style by Benjamin Dreyer. “The author's unselfish offer of assistance needs to be spread far and wide before it's too damn late: ‘For a modest monthly fee I will come to wherever you are, and when, in an attempt to pluralize a word, you so much as reach for the apostrophe key, I will slap your hand.’” ~Heidi Mastrogiovanni

Any books for children. “We have been frequenting the Friends of the Library used-book store to purchase inexpensive books to populate our Little Free Library and encourage everyone to do the same.” ~Chris Rutledge

Refuge: An Unnatural History of Family and Place by Terry Tempest Williams. “I have given away both of my copies. Williams’ raw early writing about her family and the Great Salt Lake seems to stir the soul best when it gets passed from person to person.” ~Gretchen Lida

Everyday Stalinism: Ordinary Life in Extraordinary Times by Sheila Fitzpatrick. “A book on everyday life in 1930s Russia was useful when I was researching my second novel (silk stockings were back in fashion in 1938!), but I don't need information on Siberian housing barracks now that the novel’s published. And yet, I have a nostalgic feeling of obligation toward this old book, so I’m waiting to find a good adoptive home for it.” ~Carrie Callaghan

12 of Our Favorite Reviews

We published too many terrific reviews this year to count, but some have stuck with us more than others. Here, in no particular order, are a dozen of our faves from 2014.