Make the holiday a little more loverly with these (bitter)sweet stories. 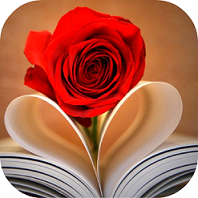 The Thorn Birds by Colleen McCullough. “I don’t read much romance, but this one still makes my heart flutter. This sweeping book is chockfull of *all* kinds of love: young love; forbidden love; love of country; a mother’s love; chaste love — you name it, it’s probably in there somewhere. McCullough’s unforgettable characters, vivid setting, and oodles of heart-wrenching drama (and pretty steamy love scenes, at least by 1977 standards) will always hold a special place in my hot little heart. No guilty pleasure for me — I’m an unabashed fan.” ~Julia Tagliere

The Life and Opinions of Tristram Shandy, Gentleman by Laurence Sterne. “I've always thought Uncle Toby and the Widow Wadman in Tristram Shandy were painfully star-crossed. Uncle Toby so mild that he's the origin of ‘he wouldn't hurt a fly’; Widow Wadman concupiscent, beautiful, and compelled to know about the groin injury Toby received as a soldier. When she finally asks him, ‘Where were you injured?’ because she wants to know if he can still function, Toby says, ‘At the Battle of Namur.’ Ha! Love...” ~Y.S. Fing

A Room with a View by E.M. Forster. “Can there be a more charming or romantic novel than this? Forster was not yet 30 when he wrote it, so his touch is playful and fresh. He gives us real feeling and pretended feeling, false politeness and honest self-expression. And here's a big reason the novel has aged so well: When Lucy breaks it off with the stuffy, self-satisfied Cecil, it is not to be with George, but to be her own person. George loves her and has awakened her, but Lucy believes she must never marry. She reflects that ‘the contest lay not between love and duty. Perhaps there never is such a contest. It lay between the real and the pretended.’ And I love Mr. Emerson's final words to Lucy. ‘“When love comes that is reality.” I said: passion does not blind. No. Passion is sanity, and the woman you love, she is the only person you will ever really understand.’” ~Amanda Holmes Duffy

The Feast of Love by Charles Baxter. “This novel is a wonder, portraying love in its many forms — from the points of view of people at various ages, in various aspects of being in (or out of) love, and with a great humanity at the core of each voice in the story. My wife, Tara Laskowski, and I actually had a passage from the novel read at our wedding! What could be more romantic?” ~Art Taylor

The Woman and the Ape by Peter Hoeg. “Of all the stories out there, this is my favorite, with one of the greatest first lines of any book: ‘An ape was approaching London.’ There are some cities that are the perfect settings for love stories, like New York, Bombay, London, and Dublin; put any of these in the first sentence, and I find it hard not to fall in love at first sight.” ~Leeya Mehta

These Old Shades by Georgette Heyer. “When the arrogant, wealthy, and rakish Duke of Avon is accosted by a street urchin in Paris one night, he swiftly perceives there is more mystery attached to little Leon than first meets the eye. Avon takes the young boy under his wing — but are his motives honorable? And will Leon ever trust him enough to reveal his secrets to the formidable duke? I know this summary doesn't sound much like a love story, but I promise you the book is!” ~Mariko Hewer

“It’s a toss-up between John Updike’s Marry Me, an open-hearted tale of mutual adultery in the 1970s, and Patricia Highsmith’s The Price of Salt, about forbidden longing in the 1950s. Both are stylistically spare, with Highsmith for once suppressing her knack for dismissive social atmospherics in favor of an uplifting ending.” ~Bob Duffy

The Shipping News by E. Annie Proulx. “This Pulitzer Prize winner tells the story of Quoyle, a bad-luck newspaper reporter from Upstate New York who is devastated by family travails (including an unfaithful wife who tries to sell their daughters to sex traffickers!). He retreats to his ancestral home in Newfoundland, where, with the help of some quirky characters and bizarre situations, he falls in love with life and a woman, Wavey Prowse. A truly great book.” ~Lawrence De Maria

When Katie Met Cassidy by Camille Perri. “This sweet, sexy romance about two opposing counsel lawyers who seem to be falling for each other — even though one of them thought she was straight — is cute, funny, and a delight to read.” ~Carrie Callaghan