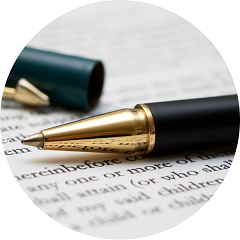 The pen felt dangerous in my hand, which is strange because I often have a pen in my hand. But not when it’s poised to write in the margins of a library book. I felt like a graffiti artist caught with spray paint in a subway tunnel. Luckily, the impulse was fleeting. My pen hovered above the white page but did not touch it.

The book was safe...for the time being.

The near miss left me rattled, but I have an explanation. After years of scribbling book notes on the backs of envelopes, receipts, or whatever else I have on hand, I’m finally letting myself write in the margins again. But only, of course, if I own the book.

It's the return of an old habit. If I were to stand up from the couch where I’m writing now and randomly choose one of the books from the shelves that line the wall, its pages would be covered with notes — or dog-eared, at the very least.

Take Winesburg, Ohio. There it is, tucked away in the topmost, upper-left-hand corner after a long-ago (and failed) effort to alphabetize my books by authors’ last names. I pull out the battered paperback, and there, on brittle pages I can barely turn without tearing, is proof of my former habit, nay, compulsion: “Like a fairy tale, George’s life begins with the death of his parents.” Or “Jesse — able to be absorbed by an absolute.”

I was an English major, so this explains much of it. Books were marked to be analyzed and understood. But it was fun, too, and I don’t remember why I stopped. Probably to set a good example for my kids when they were young. Or maybe because I was mostly reading library books.

But now I’m a student again, with a pile of books on my desk and a slew of assignments to complete. I’m wrestling with terms like “the signifier” and “the signified.” I’m curious and intrigued and mildly terrified. Writing in books seems the least of my problems, especially since many of my books are used and already marked up (one of them, for some reason, in hot pink).

So now I’m underlining the term “technological modesty” in a book by Neil Postman; scribbling a question mark alongside a description of Russian formalism in an anthology of literary theory; and drawing a smiley face beside the name Oedipa in Thomas Pynchon’s The Crying of Lot 49.

What I’m doing, I realize, is interacting with text in a way that I’d almost given up. And though it’s defacing the books, it’s enlivening my mind.

It’s the kind of give-and-take that happens best between the reader and the page — and it doesn’t happen when I’m reading online and too distracted by the busy, buzzing screen behind the words.

Besides, I can’t scribble in the margins of things that don’t have margins (though not for lack of trying; I’ve spent hours highlighting text on my e-reader and saving clips of audiobooks, neither of which I can retrieve).

The fact is, these old methods aren’t meant for new technologies that feature comments, likes, retweets, and all sorts of other ways to engage. The book, on the other hand, was made for marginalia because it’s made with margins.

I’ve come to see margins as breathing space, fallow fields where ideas can sprout and grow. Frolicking in them again reminds me of what we lose in a digital culture.

In her final interview, the late Anne Rice described herself as a diligent underliner. “I take notes in the margins almost constantly,” she told the New York Times Book Review, adding that she resisted calls to join the digital revolution because she was “too enamored of making handwritten notes all over the page.”

Say what you will about the touchscreen, the tablet, the smartphone. They have their place, and I’ve come to terms with them. But give me the heft of a Victorian novel, one with broad margins. And give me a pen to go with it.

Anne Cassidy has been published in many national magazines and newspapers, including the Washington Post, the New York Times, and the Christian Science Monitor. She blogs daily at A Walker in the Suburbs.