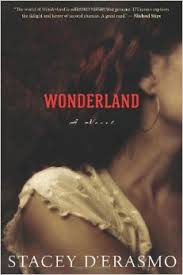 New York City, September 1975. Patti Smith is in the midst of recording her seminal first album, “Horses,” a masterpiece of poetic punk rock. On a sunny day, when the light seems right, she and Robert Mapplethorpe create what comes to be the iconic cover photograph. Smith records the process in her marvelous 2010 memoir, Just Kids: After taking twelve pictures, Mapplethorpe finally decides on the one image that “has the magic.” Bingo. Right there. Magic, the ineffable stuff that music, art, and literature are made of.  How does it happen? Where does it come from?

In her quietly electric new novel, Wonderland, Stacey D’Erasmo explores that vast, forever green territory. And in the narrator Anna Brundage, D’Erasmo has created a powerful presence, a “too-tall red-headed woman with bangs who rides her bike to school from the East Village.” The child of an infamously artistic father, progeny of the counter-culture, and now 44, Anna has been trying, without much success, to follow up her much-acclaimed first record of 2002, “Whale.” Wonderland is about finding a way back, finding the door to that land of artistic wonder. But Anna’s tangled up in blue. And we’re right there with her.

It’d be very easy for Wonderland to veer off-road into the well-travelled clichéd swamp of sex, drugs, and rock ‘n’ roll — it’s all there: sex with strangers, clouds of cocaine, long crazy parties, after-parties, hangovers, and bleary-eyed dawns outside a chateau in the south of France. And a conventional, sensible sister. Yep, it’s all there.

Yet somehow, there’s a never-give-up, hopeful optimism lurking beneath the surface, even when the gigs turn disastrous, the coke flows, and records fail. As Anna says, “I had to keep going, I couldn’t stop, and besides, I had nowhere else to go.” Writers, musicians, and artists know something about that.

Wonderland is not just about rock ‘n’ roll or second or third chances. It’s about exiles, outsiders, and the places they inhabit, physically and emotionally. Like the Rolling Stones’ long love affair with the map of America, Wonderland is homage to the secret places of Europe, including the otherworldly Free State of Christiania, a communal district of Copenhagen where the novel opens. The locales of Anna’s comeback tour (“coming back from what to what, anyone might well ask”), which support her new album, “Wonderland,” represent the vivid settings of the book. Perugia, Arezzo, Hamburg, Oslo, Latvia, Basel, and Goteborg — the names reel off like train stations in an old movie — are a bit off the beaten track, places and venues only exiles on the road might know.

Anna, free and relentless, has invented her own life. She keeps on keepin’ on: “Exhilarated and exhausted, I wanted to tell this man something, something only a man like him could understand, something the ambitious, snake-hipped drummers and bass players and demi-artists I’d been with before couldn’t possible know, what it was be alone and out here like this, in a kind of exile. This man — older, tethered, restless, hungry, heavy, warm — was an exile too, always far from home…I wanted to tell him something about that, exile to exile, hunter to hunter, but at that moment I could show him only with my breasts, my knees, the force of my coming.”

This is a powerful woman. You might say she’s leaning in.

Having sold artistic relics of her famous father to fund the band’s tour and alienating her sensible sister Lila, Anna is fully invested with much at stake. Even after disastrous gigs, that dark optimism is still there: “It is a happiness that, if it had a color, would be an almost electric light blue, like the eye of a peacock’s tail. An improbable, excessive, supersaturated blue.”

But it’s the music in her that matters: “And then on night six, stinking and exhausted, drowning in dunes of self-pity, I passed through the eye of the needle to wonderland — to the broken, the illogical, the roads that double back on themselves, the weird, the uncanny, the in-between…And I realized something else: the central importance of the unheard chord, the chord that is never played, the chord that happens after the music ends…Invisible, inaudible, and yet revelatory, what finishes and composes the sequence retrospectively: you discover that it was all going, in the end, toward the chord that isn’t heard but is only anticipated. Which is to say, the last chord happens in the mind of the listener, as if he is remembering a sound which in reality he has never heard before. The unheard chord feels like, must feel like, a memory. This was my ambition.”

As Robert Mapplethorpe told Patti Smith, this one, Wonderland, has the magic. I don’t know about you, but I’m going to listen for that unheard chord. Excuse me, while I go do that.

Barry Wightman’s novel Pepperland, a revolutionary, technology, rock-‘n’-roll love story, was published in 2013 and won a Silver IPPY for best fiction from the Independent Publishers Book Awards. He’s still trying to figure out the chords to old Kinks songs.