Wise Gals: The Spies Who Built the CIA and Changed the Future of Espionage

Meet the women who shaped the world of spycraft. 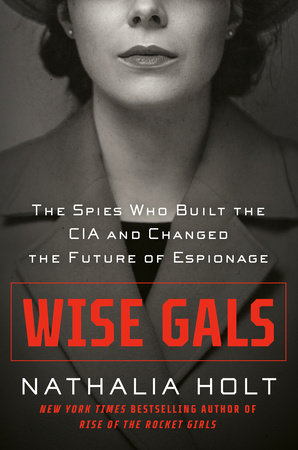 A single mother, a secretary, an anthropology Ph.D., a young wife left alone when her husband deploys, and a Lakota Sioux — these descriptions do not connote espionage, but they apply to some of America’s first modern intelligence officers. Nathalia Holt’s Wise Gals is an homage to these five women, all of whom were significant players in the Office of Strategic Services (OSS) and its successor organization, the CIA.

The mundane descriptors belie the women’s audacity. Addy Hawkins, Eloise Page, Mary Hutchinson, Jane Burrell, and Liz Sudmeier were daring, determined, and willing to defy stereotypes. Their passion in pursuit of their careers helped the U.S. win the Second World War and face off with the Soviet Union during the Cold War.

Their work helped to shape intelligence as a profession and inspired younger colleagues, both female and male. And their personal stories track with the pay inequality and barriers to upward mobility women are still experiencing in the workforce. But despite the roadblocks, their accomplishments were extraordinary.

Although from different backgrounds, one thing the women shared was beginning their work in low-level jobs and not on the fast track available to their male, Ivy League counterparts. Initially, they were hired for “women’s jobs” as secretaries or clerks or reports officers (who reviewed and evaluated information from human sources). During WWII, when able-bodied men were fighting overseas and in short supply for jobs on the home front, women were seen as little more than necessary placeholders in those jobs.

Hawkins led a cryptographic section of the OSS in Washington, DC, during the war, but it was understood she was only in the position until a suitable male replacement could be found. To her family and friends, she was a clerk, for years denied an overseas position because she had children. Page first served as secretary to Colonel “Wild Bill” Donovan, head of the OSS. And Hutchinson, the wife of a CIA officer, who, in addition to her doctorate, spoke several languages, was assigned to a reports role, as were Burrell and Sudmeier.

They all exceeded the requirements of their respective jobs. Hawkins ultimately earned a position overseas, leading to her being awarded a Certificate of Distinction. Page rose to be the first female station chief, head of a CIA contingent overseas. Hutchinson served in Japan, where she worked in operations despite her title of reports officer. Burrell recruited, developed, and handled spies during the war. And Sudmeier, who joined the intelligence service after spending WWII in Alaska with the Women’s Army Auxiliary Corps, singlehandedly managed CIA sources in Iraq after the fall of King Faisal II in 1958. She stayed behind in the country because of her unique ability to blend into the local culture; her colleagues, too obviously foreigners, were forced to evacuate for their safety.

Holt rounds out Wise Gals with materials from the women themselves — including diaries, letters, scrapbooks, and photos — supplemented by interviews with CIA officers who remain anonymous. She also relies on declassified information from the CIA’s FOIA Electronic Reading Room and documents automatically declassified after 25 years that can be found on the CIA CREST website. In other words, all the previously classified information included in the book was obtained via appropriate channels.

The book offers an informed look at the work of intelligence and the development of the U.S. service from its OSS days to its current incarnation as the CIA. The author is careful to differentiate among spies (the people the CIA recruits overseas to garner information) and the CIA officers who manage them. (Please don’t call a CIA officer a spy.) She also delineates the various components of intelligence work, from operations — gathering intelligence from human and technical sources — to analyzing the product gathered.

History buffs, those interested in national security, and spy-novel aficionados will find much to like in this true-life story of espionage. There are tales of clandestine operations, scientific and technical feats, covert communications, and counterintelligence investigations. While the spy stuff is interesting, Donovan long ago pointed out that “intelligence work is held in peculiar opinion in the United States. Most people think of it as a cloak and dagger business. In reality, it is detached and minute work.”

It’s this work, and the role women played in it, that Holt focuses on, and not the merits of U.S. foreign policy. To get a wider perspective on the latter, you’ll have to consult other sources. As you do, it’s important to remember that while the CIA’s detractors will be quick to point out its failures, the agency works in service of an elected government. As Holt notes, operatives like “[Eloise Page], although prominent in the CIA, did not make policy decisions…The role of a CIA officer was to inform those in the American government who did make such resolutions, omitting personal bias.”

It was true then, and it still is today.

C.B. Santore is a freelance writer and editor in East Hampton, CT. She worked as an analyst and editor at the CIA.

By Shushana Castle and Amy-Lee Goodman