Where the Water Goes: Life and Death Along the Colorado River 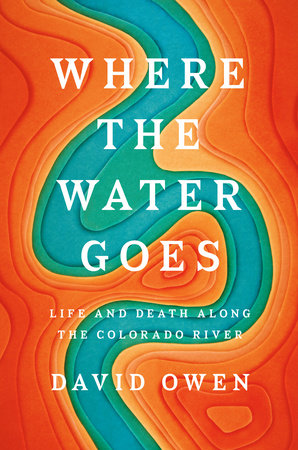 As a Westerner myself, David Owen’s C.V. had me giving him a side-eye of suspicion. Even before I opened his latest book, Where the Water Goes: Life and Death Along the Colorado River, I questioned what the heck this Connecticut Yankee really had to tell me about the river. Not only is it named for my home state, but it was also the source of the water I drank for most my life.

Owen, on the other hand, is a staff writer for the New Yorker and a contributing editor at Golf Digest. He’s even hit the links with President Trump. Had he ever endured the reality of drought and dust? Had he ever talked with a relative who made sure all the family photo albums were packed up because the latest wildfire was a little too close for comfort? I doubted it.

Where the Water Goes is an essential book for everyone along the Colorado River. Sections of it should be photocopied by high-school teachers and distributed to students from Boulder to Yuma. It should be read by every holder of political office who dares govern the West. Quizzes on it should be given to every new resident who moved out West from someplace wetter.

“Want to add your straw to this drink?” it will say. “Let’s make sure you know the price of that water.”

Owen’s true gifts to his readers are his clarity and careful reporting. He can take the vertigo-inducing complexities of water use, politics, and hydrology, break them into digestible fragments, and then add human faces. Faces like Burton Mendez, a farmer on the Mexican side of the border, or Bob Gripentog, whose family owns the Lake Mead Marina.

He is also a precise journalist; there are so many sources that each sentence feels anchored by a tiny stack of references. In the back, every chapter is listed with a set of suggested readings.

The book begins near Boulder, where the river starts and works its way down to the Mexican border. Owen tracks how the lake changes from Rocky Mountain stream, to houseboat playground in Lake Powell, to a desecrated riverbed near Mexico. He also notes that the mess of water policy is so tangled in agriculture, recreation, and drinking water that unraveling it is almost impossible.

Nonetheless, Owen helps readers tackle the impossible. Among the factual gems from this book is a note that the famed fountains of the Bellagio Las Vegas are fed from an aquifer; they’re not attached to the Colorado at all. Another important consideration is that some of the places in California we see as perfect for agriculture only get a few inches of rain a year and would be useless without the Colorado. Also, the water-distribution allotment and legislation that we mostly use on the river today is based on a system set in the 1920s, which were some of the wettest years on record.

Lastly, Owen outlines the essential difference between “wet water” and “paper water.” The former is the actual water used from the Colorado every year; the latter is the allotment of the river owned by individuals, businesses, cities, etc. Paper water, Owen states, is way more plentiful than wet water.

So, Where the Water Goes has won me over. The book should be used as the powerful educational tool it is. However, if I were looking for a book to make people want to protect, understand, and love the Colorado River, this wouldn’t be it.

Yes, it is beautifully written. Yet I wonder how someone like Owen, who spent this much time chronicling each curve and contradiction of the Colorado, would have so little of his own opinion to share. Does he want us to care about the water or those who drink it? Should we be concerned about the over-abundance of paper water versus real water? He is clear that the way the water is now managed is unsustainable, but does he want things to change?

Perhaps I have read too much Edward Abbey, Terry Tempest Williams, and Robin Wall Kimmerer. Maybe I’ve just grown too accustomed to nature essays and need to be careful to separate them from natural-resources reporting. Nevertheless, the whisper making me wonder what exactly Owen felt he was bearing witness to kept talking, and it wanted him to speak up.

Gretchen Lida is a Colorado native with an MFA in creative nonfiction from Columbia College Chicago. Her work has appeared in New City, Horse Network, Brevity, and elsewhere. She resides in the Midwest, where she rides horses and thinks about Aldo Leopold.