When I’m Gone, Look for Me in the East: A Novel

A quiet, magical tale of never-ending questions and universal truths. 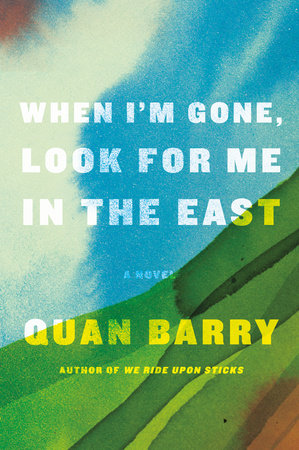 The year is 2015. A young novice Buddhist monk, Chuluun, accepts a quest to find the child reincarnation of an important lama who is hiding in plain sight somewhere in the wilds of Mongolia. The travel is dangerous, but the greater problem is the deep doubt the monk feels about his spiritual path. It does not help when his twin brother, who is locally notorious for leaving the monastery and embracing Western ways, joins the small search party.

This situation sets readers up for adventures ranging from encounters with sheep thieves to a violent sandstorm to a murderous lynx and more. But When I’m Gone, Look for Me in the East is no ordinary adventure tale. Although the events, and the landscapes, are strange and wondrous, Quan Barry’s new novel is utterly original, a unique immersion in history, philosophy, religion, the nature of time, and the clash of old and new happening all over our world.

It can take a few pages to get the hang of this book, with its short chapters — most just a page or two long — which often end in mid-scene and pick up again in the same place, upending traditional ideas of what a chapter or a scene should be. Barry is implying that the ways we divide time are artificial, that time itself is illusory, a theme that is everywhere in her book.

The movement between past and present, and between dreaming and waking, becomes ever more fluid as the plot progresses, and the entire story is told in present tense, whether it’s an episode along the journey in Mongolia, a distant childhood memory, or even a description of the life of Marco Polo. This can be slightly jarring: “To my eye Little Bat looks even more tranquil now than he does an hour ago…” But it works. As Chuluun reminds us, “Time is irrelevant. There is only the present moment.”

The Buddhism the novel explores is in constant dialogue with 21st-century questions and with the irresistible force of global pop culture — even in the middle of the Gobi Desert or the Altai Mountains. Chuluun wears the digital watch his mentor gave him; other monks have iPhones and spending money and Facebook friends; and foreign tourists are beginning to appear in the most untouched parts of Mongolia.

This tension between the old world and the new is one of the book’s many dualities. Mongolia’s iconic hero Chinggis Khaan provides another. His greatness is a material, earth-bound thing, while Buddhist teachings are of the air; he offers an alternative worldview to that of the monks.

Chuluun’s twin is a devotee of Khaan and wears his hair in long braids like a Mongol warrior while also wearing earbuds to listen to music on his MP3 player. This complicated Mongolian world, with its blend of influences, reminds us that we are all products of multiple traditions.

Chuluun’s brother and the other two men who join the quest are mysterious, complex characters who struggle and grow together. The wise, older monk they call Uncle shares his own story of doubt and reassures his companions, “I struggle, I suffer, I move beyond suffering, from time to time I slip back into suffering.”

Although Barry’s story is drenched in Buddhist ideas, it is not just for people interested in Buddhism. The questions Chuluun wrestles with are for everyone, as when he asks, “Why do we need to believe that our lives add up to some grand narrative?” They are questions of how to live, of our place in the world. They feel very modern, although maybe important questions have always felt that way.

These are lofty concerns to contemplate, but the book offers so much more and will mean different things to different readers. There are surprising history lessons here, epic migrations, harrowing survival stories, and details of life in a place that is faraway and alien for most of us: wild contests on horseback, children who hunt with eagles, the tingle of fermented yak milk on the tongue, the astonishing Buddhist ritual called a sky burial.

The author’s landscapes are thrilling, whether she is describing mountains that rise like knives into the clouds or the vastness of the steppe in the moonlight. An award-winning poet, Barry shapes transparent, simple language into images that are lyrical and haunting.

The novel moves to a rich conclusion that resolves some questions from the quest but leaves others unanswered. This seems appropriate for a tale that insists answers, like time, are slippery. “Either you get to Ulaanbaatar or you don’t,” a wise child tells Chuluun when he is first setting out, in a tone of voice “as if this is the most obvious truth in existence.” When I’m Gone, Look for Me in the East is a story of much magic and many miracles — a startling, yet gentle, book.

Sally Shivnan is the author of the short-story collection Piranhas & Quicksand & Love. Her fiction and essays have appeared in the Georgia Review, Antioch Review, Glimmer Train, and other journals, and her travel writing has been featured in anthologies including Best American Travel Writing, as well as in the Washington Post, Miami Herald, Nature Conservancy Magazine, and many other publications. She teaches at University of Maryland Baltimore County (UMBC).