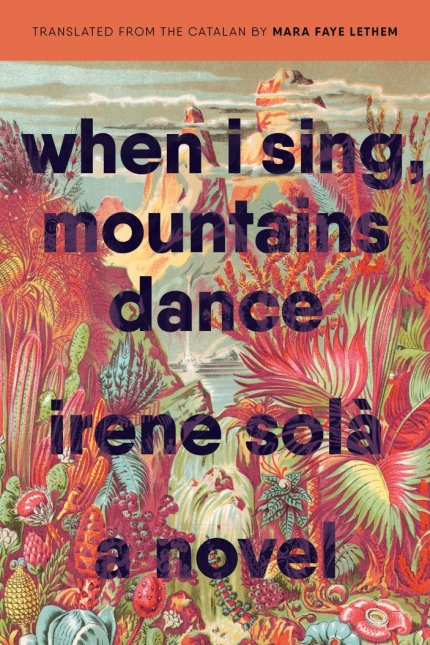 A man gets struck by lightning and dies, leaving behind a wife and children and a grumpy, nearly deaf grandpa. A friendly giant kills a man by mistake and is haunted by his intended target, the roe deer he was hunting. A woman, plagued by the ghost of her dead brother, is courted by a bear. And a cluster of black chanterelles sings of their caps and trumpets and the men and women who gather them up.

These are just some of the tales that comprise When I Sing, Mountains Dance, by the Catalan writer Irene Solà. And while they may seem to be unrelated and anchored firmly in the realm of the fantastic, Solà weaves them into a narrative whose foremost binding element is the characters themselves.

As you might suspect, When I Sing, Mountains Dance is not a typical novel, nor does it read like one. At times, it is poetic and metaphorical; at other times, it reverberates like a magic-mushroom trip inspired by those chanterelles, the heroes of an entire chapter. And they’re not the only objects/characters to merit their own section. The book also boasts chapters called “Fear” and “Poetry.” And then there is “Crunch,” whose visual presentation evolves into what you might call an exemplar of post-modernism.

Yet post-modern the novel is not.

So, what do black fungi, a giant, a ghost, a bear, and lightning have to do with each other? Is one of them the protagonist? Does the novel even have a protagonist? Is When I Sing, Mountains Dance a novel at all, the label on its cover notwithstanding?

The reader needs to approach this work with no preconceptions of how a story should be told, for just as James Joyce shocked the world out of narrative complacency and Gertrude Stein awakened the slumbering poetsphere into modernism, Solà takes the novel and breaks it into fragments before reassembling it, piece by piece, into stories that express joy, pain, and sorrow and that echo back to each other.

It all centers around Domènec, the lightning-strike victim who is the catalyst for everything that follows. He’s not really the protagonist, though. In fact, you could postulate that the book is an assemblage of various heroes, each earning the mantle of protagonist on their own.

And what about the element of language? Indeed, language might itself be considered a protagonist here, for Solà (and her translator, Mara Faye Lethem) presents us with a true poetic symphony that stands on its own and evokes mystery, magic, and myth, such as in this passage from “Crunch”:

“My slumber is so deep that it slips beneath the seas. The sea used to cover me, millennia ago, I can scarcely recall. Blind and deaf and sleeping as I am. Out, out. Grow, mosses. Reproduce, wee beasties, the pitter-patter of your tiny feet rocks me to sleep, the creeping of your roots consoles me. Nothing lasts very long. Not a thing. Not stillness. Nor calamity. Nor the sea. Nor your ugly little children. Nor the earth that tolerates your puny little feet.”

One can only imagine the linguistic richness of the original Catalan!

When I Sing, Mountains Dance may leave you baffled at first. So, again, approach it not as a novel but as a celebration of language and inventiveness. It’s not quite poetry, not quite narrative, but rather a mélange of the two; a distinctive set of voices and narratives that somehow merges into a whole. And as in all good but challenging literature, meaning eventually arises like the mist lifting on a fresh, dewy morn to reveal a hidden landscape of preternatural, previously unknown beauty.

Part of a writer’s job is to take us places we’ve never been and to present us with visions we’ve never conjured. In When I Sing, Mountains Dance, Irene Solà has accomplished this with panache.