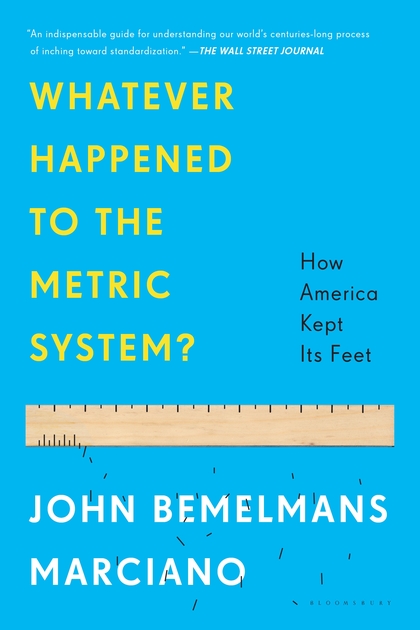 Following the Enlightenment, world leaders and thinkers began to talk seriously about standardizing basic units — such as measurements of length, weight, temperature, and currency — as well as synchronizing clocks and calendars. At that time, everything seemed to be open to change, even the number of hours in a day or months in a year.

By the end of the 20th century, the slow-motion scramble was basically over, with the United States left as the sole industrialized country that did not adopt the metric system. In his new nonfiction book, Whatever Happened to the Metric System?, author John Bemelmans Marciano, best known for his children’s stories, takes us on a delightful romp through history and tells us how America “kept its feet.”

With the expansion of trade in Europe during the 18th century, the need for standardized units of size, weight, and currency became more acute. If you wanted to sell a hundred pounds of flour for a silver coin, you and your buyer needed to know what a pound meant and what a silver coin was really worth.

Picking a reasonable length and calling it a “meter” might not seem difficult. Large distances could be measured in units of 1,000 meters, or “kilometers.” Tiny things could be measured in “millimeters,” or one-thousandth of a meter. Area could be expressed in square meters, volume by cubic meters, and weight by comparison with a certain volume of water. For example, a liter could be defined as one-thousandth of a cubic meter, and a gram the weight of one cubic centimeter of water.

Nonetheless, even fixing a length and declaring it to be a meter was not so easy. A metal “meter” rod kept in a vault will expand and contract slightly, ruining its precision. If that were not bad enough, the world’s public strongly resisted a new uniform system of measurement. The author relates an Englishman’s complaint about the possibility of the liter replacing the pint: “One liter [of ale] doesn’t satisfy and two is too much.”

On the political level, England opposed the metric system perhaps because it had been developed by its enemy, France. The newly independent U.S. was initially enthusiastic about all things metric, but support waned in the next century as the young country’s respect for post-revolutionary France faded. All this makes for a good tale, and Marciano does not disappoint.

In the late 18th and early 19th centuries, France was the intellectual and scientific capital of the Western world. Therefore, it was not surprising that the search for a scientific system of measurement should have begun with French “savants,” among whom Benjamin Franklin, the most distinguished American scientist at the time, was an honorary member.

The Marquis de Condorcet, an aristocrat who was both a mathematician and a politician, was enlisted by the French Academy of Sciences (perhaps the only such organization in the world at that time) to establish a basic unit of length and currency with multiples and fractions given by decimalization (multiplying or dividing by powers of 10).

However, France was not a tranquil country during those years. The French Revolution led to mass killings, a time known as “the Terror,” the Napoleonic wars, and so forth. Aristocrats and savants were subject to summary dismissal via the guillotine, and the aristocratic savant Condorcet ultimately committed suicide in a dank prison. (He is best remembered today by social scientists for his work on game theory.)

Marciano, an American of French heritage and a grandson of Ludwig Bemelmans, author of the original Madeline children’s book series, takes the reader with enthusiasm through this entertaining — but sometimes bloody — French history.

In one of his fascinating digressions from the metric system, Marciano discusses proposals to change the calendar. The number 365 is a natural choice for the number of days in a calendar year since it is the count of rotations of the earth in one passage around the sun. The same cannot be said for the number of hours in a day, days in a week, nor months in a year, however, which have only biblical or historical origins.

Proposals to “decimalize” the hours in a day or days in a week met with strong opposition from the clergy, as well as the public. Nevertheless, the movement to add an extra month to each year gained a considerable following. With 13 months of 28 days each in a year, every month could start on a Sunday and have exactly four weeks. This would leave one extra day per year, which could be a new and welcome holiday.

Alas, that nice simplification of our calendar never happened.

Many other examples of standardization, such as the choice of Greenwich as the location of the zeroth longitude, the decimalization of various currencies, and the attempt to simplify spelling of the English language, are discussed in this fascinating book. (The reader is not left waiting long to find out why the metric system was not adopted in the U.S.: budget cuts in the 1980s!)

Although there are pages of footnotes, the book does not pretend to be an authoritative or scientific history of units of measurement. This should not detract from its appeal. In a rambling, anecdotal style, Whatever Happened is both informative and entertaining.

Linda P. Rothschild is a Distinguished Professor of Mathematics, Emerita, at the University of California, San Diego, and a member of the American Academy of Arts and Sciences.