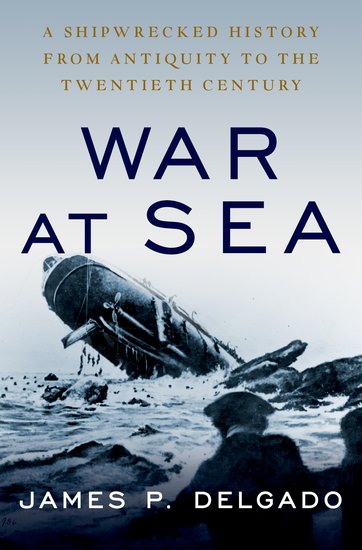 James P. Delgado, an historian and maritime archeologist, specializes in studying the wrecks of vessels used in the violent clash of peoples, tribes, and civilizations. In his new book, War at Sea, he offers a sweeping survey of evolving battle craft, along with succinct considerations of the practical war-making doctrines that spawned them.

This is a comprehensive and detailed chronicle, a first-rate, era-by-era account ranging expertly from the age of primitive war canoes to today’s global maritime faceoff, where opposing nuclear navies prowl our planet’s oceans both above the surface and deep below it.

For enthusiasts and browsers alike, this is an impressive book. Delgado draws on voluminous printed sources to guide us on a worldwide tour of the marine localities where significant conflicts played out, as well as the present-day repositories of artifacts recovered from the shipwrecks that resulted.

War at Sea is sumptuously illustrated with scores of photos, plus a wealth of full-color plates. The book offers an exhaustive bibliography as well, an encyclopedic roster for any reader who wants to explore the subject further. Delgado’s bibliography is dazzling testimony in its own right to the author’s expansive scope and expertise.

But this author is much more than a dogged researcher haunting reading rooms and dusty museum collections. He’s also a field archeologist, a global explorer, and an expert scuba diver who doesn’t hesitate to get wet in pursuit of his research.

Delgado frequently varies the pace of his narrative by weaving in accounts of his own sub-surface investigations (via scuba or in submersibles) of many of the wrecks he discusses. His explorations with Robert Ballard, renowned discoverer of the Titanic wreck, for example, add a real-world authenticity to the book’s rich commentary.

Several epochs covered in War at Sea emerge as particularly compelling. These standout moments include Delgado’s recounting of Viking coastal depredations, the little-known saga of Genghis Khan’s massive fleet, and, most notably, the English defeat of the Spanish Armada in 1588. In the latter, it was poor planning, internal discord, and a “staunch English defense” that ultimately resulted in 120 wrecks in Scotland and Ireland, most of them from the 130 vessels making up the Spanish flotilla.

When Delgado turns his attention to 19th-century America’s attempt to refit watercraft for battle use, we get a rich history-in-microcosm of a chillingly portentous evolution. The progression begins on New York lakes and the Chesapeake Bay, in vain opposition to British naval forces, and then moves inexorably to sea-going warcraft:

“Then came the American Civil War of 1861-1865, where both sides of the conflict demonstrated the efficiency of steam, ironclads, turrets, mines, and submarines. That war accelerated the shift from wooden navies to iron and steel ships, heavier guns, and the end of sail. It also led to an industrialized naval competition that accompanied growing international tensions as ‘Great Powers’ vied for overseas territories and control of the seas…”

This expansionist drive is responsible for much of the material the author brings forward in the book’s final 200 pages. There he guides us through the gunboat diplomacy of the late-19th century, through Pearl Harbor and the island war in the Pacific, the U-boat scourge in the Atlantic, and the Cold War age of nuclear-armed subs, and on through to today, when the seabed bristles with devices for detecting the movements of these undersea marauders.

To be sure, beyond libraries, there’s probably a limited commercial market for scholarly ⸺ i.e., non-popular ⸺ histories like this one. Still, we should be gratified that this detailed work is available to us. Beyond its factual rendering of our common past, War at Sea also prompts us to consider humankind’s ever-resurgent impulse to turn competition and contention into violence, playing out on what Delgado calls “the world’s biggest battlefield.”