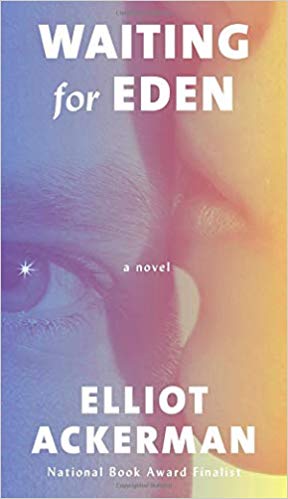 At first glance, it might be tempting to write off Elliot Ackerman’s new novel, Waiting for Eden, as just the latest gut-wrenching installment in the (sadly) inexhaustible canon of war literature.

The condition of the titular Eden, one of the three main characters and sole survivor of a horrific IED attack on his Humvee in the Hamrin Valley, immediately calls to mind Joe Bonham, the protagonist in Dalton Trumbo’s searing 1939 novel, Johnny Got His Gun.

Like Joe, Eden has lost all his limbs, as well as his sight, hearing, and speech — in short, all but his mind. Also like Joe, he is forever trapped in a prison of flesh he cannot escape except through death. This inescapable tribute to such an iconic anti-war book initially seems to set the reader up for a similar work here.

Ackerman’s own unimpeachable background as a decorated vet — a former Marine, he served five tours in Iraq and Afghanistan, earning the Silver Star, the Bronze Star for Valor, and the Purple Heart — adds to that impression. Readers could perhaps be forgiven for assuming this book is about war, were it not for Ackerman’s opening sentence: “I want you to understand Mary and what she did.”

With these words, we know this is not a war story. It is Mary’s story.

Ackerman chooses as his narrator Eden’s dead friend, a fellow Marine who did not survive the Humvee blast. One of the literary advantages of a deceased narrator is that conventions of time and place shift, allowing the reader to witness events they might not otherwise see.

One fine early example of this occurs when the narrator relates in brutal detail Eden’s harrowing flight home to the burn unit in San Antonio, where he likely will remain for the rest of his days.

When Eden develops a dangerous fever mid-flight, his wounds are so grave that the nurses tending him can barely recognize “the places where they could usually find enough vein for a needle…Inside him, the needle’s beveled point held to the single and narrow vein like a climber with too few fingers on a ledge.”

Because the narrator isn’t confined to any one time or character, the reader not only witnesses this scene, but also experiences the unease of the other patient on the flight, who likens lying beside Eden to “trying to sleep next to a box of poisonous snakes,” and witnesses the nurses’ pride at keeping alive through their flight “the most wounded man in the history of war.”

What sets Ackerman’s book apart, however, is that, as the story unfolds, Eden’s injuries and the grim realities of his homecoming to his wife, Mary, and their 3-year-old daughter, Andy, begin to feel almost incidental to the story of Mary and Eden before. To understand what Mary did, the narrator knows we must first understand Mary and Eden, and (even a little) the narrator himself.

Although Mary and Eden knew each other in high school, that idyllic era of “varsity letter jackets, Dairy Queens, and make-out parties,” they were not sweethearts. As the narrator puts it:

“They were both running away when they met…To Eden and Mary, home seemed like a quiet type of terrorism: courses at the local community college, part-time jobs that took none of their skill but all of their energy, friends they’d had their whole lives with the promise they’d have no others…Together Eden and Mary ran from all this, and it’s difficult not to fall in love with someone you’re on the run with. But you stop eventually, and then — .”

The “and then,” an estrangement born of no longer running, is what Mary and Eden are in the thick of when Eden brings the narrator, his friend, home for dinner for the first time. The two men already have deployments under their belts and will be shipping out again soon. In addition, their enlistments will end after this departure; they must decide whether to serve for four more years.

Mary, understandably, does not want Eden to re-up; she wants a life and family, and Eden has left her with the impression that having a baby would keep him home. But Eden confides in his friend, “We’re trying, you know, and having trouble.” Without a baby, Mary feels certain Eden will re-enlist.

As the narrator sits at their dinner table, studying the delicate tattoo on Mary’s neck, he finds himself captivated: “I wanted to trace my fingers between those stars, connecting, I don’t know what. Maybe that was the point.”

The stage is set for a series of startling choices Mary will make — for the narrator; for Eden, waiting now for death; and for the life she so desperately wants.

This is a tautly written, gripping read that, in the best tradition of war-related fiction, reminds us in unflinching detail of the awful cost of battle. However, it also, surprisingly, pays homage to other genres.

Part mystery, part thriller, part unconventional love story, Waiting for Eden explores with gravity and sensitivity the profound questions of love and fidelity, duty and honor, and how one creates a life worth living.

Julia Tagliere is an award-winning writer and editor whose work has appeared in the Writer, the Bookends Review, Potomac Review, numerous anthologies, and the juried photography and prose collection Love + Lust. Winner of the 2015 William Faulkner Literary Competition for Best Short Story and the 2017 Writers Center Undiscovered Voices Fellowship, Julia also volunteers for the Washington Writers Conference. She resides in Maryland with her family, where she recently completed her M.A. in writing at Johns Hopkins University.