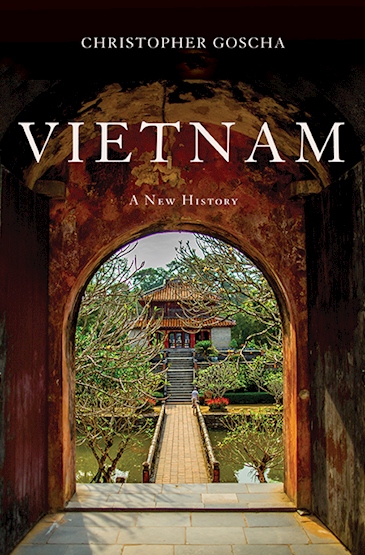 The U.S. war in Vietnam still reverberates in the nation’s psyche. It was the first war the U.S. ever lost, and the shame of the U.S. flight from Saigon in April 1975 has not faded from our national consciousness.

My ties to Vietnam go back more than half a century. A speaker of Vietnamese, Chinese, and French, I first arrived in-country in 1962 and was there on and off for the next 13 years until Saigon fell and I escaped under fire after the North Vietnamese were already in the streets of the city. My job was intelligence — first covert direct support to Army and Marine units in combat, and, after the withdrawal of U.S. military forces, as the head of the NSA secret operation in South Vietnam.

So it was with more than a little interest that I read Christopher Goscha’s new history, the longest and most complete narrative I know of, studded with detail backed by 90 pages of footnotes and bibliography. It is, in short, a welcome new scholarly take on the story of a fascinating country.

Goscha gives most of his attention not to the military clashes, which have characterized the story of Vietnam throughout its long history, but to the cultural and ethnic forces which have shaped it. He describes in detail the Han (Chinese) and Indic influences which collided in Indochina for millennia amidst the struggles among the Annamese (as the Vietnamese were once called), Khmers, Chams, and the many tribes of Montagnards.

Especially useful are Goscha’s distinct histories of the three sections of the country — north, central, and south — for which he uses the old French names of Tonkin, Annam, and Cochinchina. Unlike other histories, Goscha’s focuses on the ancient roots of modern Vietnam and how Western nations, particularly France and the U.S., have changed the development of the country. And he recognizes the overwhelming importance of China, whence the Viets originated.

As a result, Goscha spends less time than other historians on the U.S. battles during its military engagement there (1964-1975). He stresses instead the role of the Republic of Vietnam (South Vietnam) and the Democratic Republic of Vietnam (North Vietnam) during the war. While it struck me as strange to see so little ink spilled over the U.S. military role in Vietnam, that subject has been ably explored in a variety of books, especially Lewis Sorley’s 1999 A Better War and George J. Veith’s 2012 Black April.

The history of Vietnam since 1975 was mostly new to me. I was amused and encouraged to learn that, in 1986, the Socialist Republic of Vietnam (communist Vietnam, formerly known as the Democratic Republic of Vietnam) renounced the most basic tenets of communism and embraced a capitalistic approach. The result has been great progress and enrichment of the country. And, if Goscha is to be believed, the attitude and thinking of the Vietnamese population is changing and moving away from the communist dictatorial model. In short, the book ends hopefully.

But Goscha’s work is not without errors and omissions. He misinterprets the origin of the name “Vietnam.” It comes from the Chinese yueh nan, meaning “the troublemakers in the south,” the term the Chinese used to refer to the non-Chinese in southern China who eventually moved into Vietnam.

Goscha inexplicably fails to give Ho Chi Minh’s original name, Nguyen Sinh Cung, and his various pseudonyms, Nguyen Tat Thanh and Nguyen Ai Quoc among them. The latter is particularly important because it means “Nguyen (the most common Vietnamese surname) who loves his country” or “Nguyen the patriot.” The prestigious Nguyen Ai Quoc Academy in Hanoi is, of course, named for Ho.

Most troubling to me was Goscha’s failure to relate the story of Ho Chi Minh’s repeated attempts between October 1945 and February 1946 to enlist U.S. support for his cause at the beginning of the struggle to oust the French colonialists from Vietnam. Ho was less a communist than a nationalist. Had the U.S. responded to his appeals for the independence of Vietnam, and thereby avoided both a communist Vietnam and the 1975 defeat in its own war against North Vietnam, history would have been radically different. But the U.S. sided with France.

The writing is, on the whole, academic and clean but not always easy to read. The author is an associate professor of history at the Université du Québec à Montréal and writes in both French and English. My guess is that his native language is French because of the occasional oddity of his phrasing in English, such as noting that a person heralded from a particular family.

I also stumbled as I came across single quotes where American writers would use double quotes. I quibbled with some of his translations from Vietnamese and Chinese and found it puzzling that he does not report the Portuguese origins of quoc ngu, the Romanization of Vietnamese. Diacritical marks on the Vietnamese quoted would have cleared up some ambiguities. And the book could stand another edit to rid it of small errors, such as the appearance of an open bracket but no close bracket.

These objections aside, Vietnam: A New History is well worth the time and effort a study of its many pages will require. It offers a unique and compelling narration about a country of singular interest to Americans. We as a people are not known for our knowledge and understanding of other cultures we bump up against. It’s never too late to learn.

Tom Glenn, for many years a professional linguist in seven languages, has been writing stories since he was 6. He has 16 short stories and three novels in print. One more story will be published this fall, and next March, the Naval Institute Press will publish his fourth novel, Last of the Annamese, set during the Fall of Saigon.