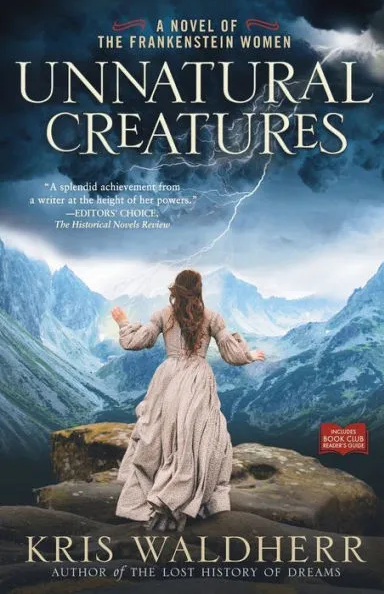 When I told a friend I was revisiting Frankenstein for inspiration to write about Mary Shelley’s proto-feminist mother, Mary Wollstonecraft, she said, “Oh, that’s the saddest book that’s ever been written.”

I knew Shelley was haunted by the loss of her mother from puerperal fever just days after giving birth to her but hadn’t connected her preoccupation to the novel that, after 200 years, still haunts our collective imagination. Frankenstein is taught as the first work of science fiction, a cautionary tale about hubris, ambition, and men playing God: the mad scientist vs. the vengeful monster. But at the novel’s heart, my friend said, it’s about a child whose parent abandons him.

Abandonment and loss are everywhere in Kris Waldherr’s Unnatural Creatures, a gripping historical novel that vividly imagines the untold stories of the “Frankenstein women” — Victor Frankenstein’s mother, Caroline Beaufort; his fiancée, Elizabeth Lavenza; and Justine Moritz, a young girl cruelly rejected by her own mother who becomes a beloved maidservant to the Frankenstein family and nanny to young William Frankenstein.

They are mothers, daughters, wives, caretakers. But, as Charlotte Gordon, author of the riveting dual biography of Shelley and Wollstonecraft, Romantic Outlaws, tells it, the women in Frankenstein are weak, murdered, or largely off-stage. By putting the under-voiced women in the spotlight — a flourishing trend in historical fiction — Waldherr illuminates Shelley’s great work while inventing her own powerfully moving tale.

In Waldherr’s exquisite retelling, the women’s stories are layered like three-color screen printing. Her Caroline, who gets no actual scenes in Shelley’s novel, is still the consummate mother but now comes to realize there’s something terribly wrong with her son Victor, his dark obsessions and secrecy (think a 19th-century version of Lionel Shriver’s We Need to Talk About Kevin). She wants desperately to stop him but feels powerless to do so.

The celestial Elizabeth, taken in by the Frankenstein family as a beggar child, has always been Victor’s intended bride, but she too now knows there’s something wrong with him. She has her own dark obsessions, drawing dead creatures — “mice caught in traps, birds victimized by cats, butterflies found with abandoned wings, glimpses of her unclad body” — but is driven by her sense of obligation. Waldherr pits Elizabeth’s loyalty to the family against her own intuition and the test of true love.

The author saves for last Justine, who is pretty and clever — even submissively docile — in the original. She’s a hunchback now, another sort of monster, this time a foil for Victor’s creature, transformed by familial love. Justine is still wrongly accused of young William’s murder and martyrs herself in the face of injustice, but here, too, Waldherr’s imagination lets loose with a twist we don’t see coming.

The three stories together make a bold-patterned silk cloth. As author Jo Baker weaves the Napoleonic Wars into Longbourn (her companion novel to Pride and Prejudice), Waldherr gives us revolutionary Europe as backdrop, a radical re-ordering of society that frightens Caroline and threatens the family’s way of life even as it seduces her youngest son, Ernest, who wants to throw in with the cause. In Waldherr’s version, change is decidedly in the air, even as men cling to their power over the family, the world, and the narrative.

This is Shelley’s cause, and Waldherr’s, too. For biographer Gordon, interpreters of Frankenstein for more than a century mistakenly attributed Mary Shelley’s ideas and inspiration to husband Percy Shelley and his circle, not once mentioning her mother, who profoundly shaped her work and life, as did her loss. Wollstonecraft believed she’d seen enough of civilization run by men to know they’d utterly failed us. (Mid-novel, Waldherr stealthily plants a Wollstonecraft book in a library.)

Shelley’s Frankenstein probes, as her mother did before her, the inevitable and tragic consequences of a world where women have no agency, where they are stripped of their power to contain the dark ambitions and violence of men. When they do not know their own hearts or obey them. Where they are, like the small, dead things drawn by Waldherr’s Elizabeth, trapped, victimized, wings clipped.

Waldherr’s three Frankenstein women are “unnatural creatures” when they don’t answer the call of their natures, which the Romantics envisioned as a force that brings humans closer to their real selves, to the sphere of emotions, to self-knowledge. Elizabeth feels it when she draws: “…a peculiar calmness fell across her soul. These sketches felt a compulsion. A hunger. The act of observation and recording was necessary, a ritual to quiet her turmoil.”

Elizabeth, however, is careful to draw only parts, glimpses, of her naked body to obscure her true identity, which is the author’s point. Without identity, wholeness, self-knowledge, women surrender their power and abandon themselves. But self-knowledge is not enough; action is the thing. Each of Kris Waldherr’s “unnatural creatures” knows what’s right and true but fails to act — until one of them breaks through the original story to rewrite its ending.

Mary Shelley would be proud.