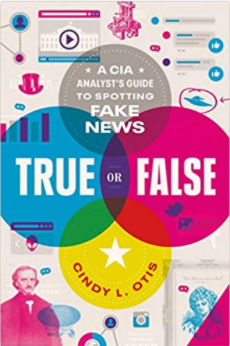 A friend shares an article on Facebook about a hot-button topic. You’re not sure if it’s accurate, but it sounds plausible. Is it true or false?

Maybe you believe it’s true because it says what you were thinking. You click “thumbs up.” Maybe you immediately determine it’s wrong because you were thinking the opposite. You click “unfollow.” Or maybe you throw up your hands, say there is no way to know what’s true, and tune it all out.

If you were a CIA-trained analyst like Cindy L. Otis, you would take a different approach. You’d look for clues to authenticate the information, check the sourcing, examine the bias of the writer and your own bias, and determine if an image or video was altered from the original.

In her book, True or False: A CIA Analyst’s Guide to Spotting Fake News, Otis lays out a user’s guide to sort fact from fiction. She worked for a decade as a military analyst and manager at the CIA after earning an M.A. in international relations and national security.

This is an important and timely book. The straightforward language, geared for readers ages 13 to 18, doesn’t diminish its usefulness for adults. It would also be a good source for teachers leading middle or high school classes in media studies, current events, or critical thinking.

The first half of the book is a history of fake news and the impact of new communication technologies on the dissemination of information. Otis rightly points out that although the fake news label is currently fashionable, the idea behind it is ancient.

She traces instances of deception, from Ramses II’s claims of a divinely inspired victory over the Hittites in 1274 BCE, to the yellow journalism of William Randolph Heart and Joseph Pulitzer — who whipped up war frenzy against Spain in the 1890s — through World War II propaganda efforts.

Advances in communication technology opened new avenues for deception. Printing, telegraphy, radio, television, and the internet each, in turn, created more efficient vehicles to propagate ideas, both true and false, faster and farther.

The second half of True or False offers an antidote to the confusion in tools and techniques to help sort out what’s real from what isn’t. Otis has chapters on facts versus opinions, the impact of bias, understanding polling, spotting fake photos, the influence of memes, and how to deal with the unremitting news cycle. The end of each chapter has a quiz to practice the concepts discussed.

Otis begins the tools section with specific suggestions for spotting opinion masquerading as fact. Some pieces are clearly labeled “opinion” or “editorial” (such labeling is a clue that the publication or program is probably a responsible source) but often the distinction is not made. Be suspect of assertions that don’t provide evidence or cite authoritative sources. Further consider any evidence provided to see if it’s from a trustworthy source, is correct, and is unbiased.

In a chapter on bias, Otis discusses cognitive dissonance, negativity bias, and confirmation bias and shows how each can close our minds to the truth. For me, this was the most important section of the book because we all have biases that often short-circuit due diligence.

A misleading headline serves as a good example that touches on all forms of bias. A provocative headline grabs your attention. Perhaps it confirms your existing opinion. It may reinforce a negative attitude. Possibly it is so disruptive to your prevailing mindset that you try to rationalize it away. You focus on the headline and ignore the article.

For purveyor of fake news, an intentionally misleading headline is “bias bait” to get you to send a link to your friends without further exploration. If deception wasn’t the intent, the headline might just be poorly written. In that case, it might not be an accurate portrayal of the story but instead exaggerate one element of it. In either of these scenarios, you aren’t getting the whole story if you stop at the headline.

Otis has other useful tips, like asking what more there could be to the story. Has the author picked only the facts that support his or her argument, ignoring other, contradicting facts? Is the author affiliated with a conservative or liberal organization or a spokesperson for an industry that is discussed in the piece? Does the author have subject-matter expertise? The writer’s political or work affiliation doesn’t necessarily mean the piece is fake news, but it does inform the reader about the author’s possible bias.

One test that Otis points out is new to me: a reverse image search to determine if you’re seeing the original or a doctored version of an image. Check out her section on photos and videos. It should be particularly helpful in this election year, with the prevalence of “deep fakes” — altered videos that mean you can’t always believe what you think you are seeing.

The historical context Otis provides tells us that fake news is not a new phenomenon and it’s not going away. But her work also offers reassurance. With self-awareness, attention to detail, and common sense, it is possible to sort true from false.

Young Eliot: From St. Louis to The Waste Land

This biography fails to capture the power of the great poet’s work.