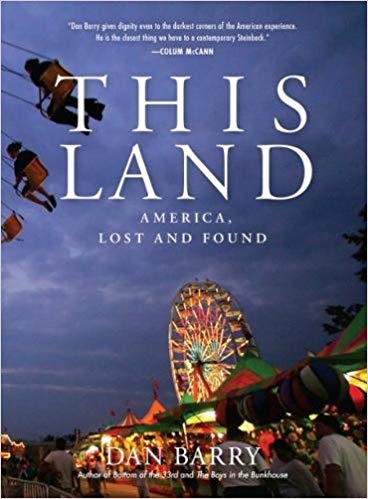 Take a seasoned and talented Manhattan-based journalist and let him explore the hinterlands — wherever he wants to go — with no mandate other than to file weekly stories about “the real America.”

That worked pretty well for CBS when veteran correspondent Charles Kuralt hit the road in an RV in 1967 for his regular “On the Road” contributions to the network’s evening news show.

Kuralt managed to find a fascinating tale at every turn — and was happy to admit it was rarely one he’d set out looking for. He roamed the back roads for a quarter of a century, going through six RVs and introducing viewers to all sorts of fascinating people and places. His stories were generally inspiring, often humorous and always masterfully told.

Dan Barry has been with the New York Times for more than 20 years. He’d been writing an “About New York” column for three years when he was temporarily sent to New Orleans in 2007 to help out with covering the aftermath of Hurricane Katrina.

While there, he saw a black man’s body ignored on the street for two days and wondered if a white body would have been treated the same way. Somehow, that triggered an epiphany: It was time to write about the whole country and the people in it.

The result was his “This Land” column, named for Woody Guthrie’s simultaneously worshipful and withering paean, “This Land Is Your Land.”

It’s taken him to all 50 states, and it’s almost always clear he’s an outsider wherever he visits. He admits as much from the start, noting, “If I’m in Illinois, the rental is from Texas; if I’m in Texas, it is Wyoming; if I’m in Wyoming, Florida. The license plate alone marks me as someone not from here, wherever it is. And yet here I am.”

Barry, born in Queens, sometimes makes it seem that what’s happening in the Big Apple, or how the city’s residents feel about the world, is what really matters — perhaps understandable, given his publication’s primary audience.

(Kuralt, on the other hand, was a North Carolina native who was warmly welcomed by small-towners because they knew was one of them who happened to make good but didn’t let it change him.)

It’s a contrivance that can cause train wrecks: A funny, fluffy story about goofy police-blotter items in a rural Nebraska newspaper, for example, is immediately and jarringly followed by a brutal tick-tock account of an execution by electric chair in Tennessee.

The lack of a clear cohesive thread is disappointing, perhaps especially because Dan Barry’s 2011 book, Bottom of the 33rd: Hope, Redemption and Baseball’s Longest Game, held together admirably well.

It was a riveting account of the longest professional baseball game ever: a 33-inning, 1981 contest between the AAA league clubs from Rochester, New York, and Pawtucket, Rhode Island. The remarkable game itself provided more than ample glue to bind stories about the players, the fans, the stadium crew, and the cities involved.

This Land, of course, covers a much longer period and a lot more ground. Some of the most interesting tales Barry tells come from very small places. There’s a tiny town called Bill, Wyoming, for instance, that exists pretty much just to provide legally required rest for railroad crews and meets their needs with a 112-room hotel and a 24-hour diner.

There’s Prairie Grove, Arkansas, where the town’s last phone booth was knocked over by a car in 2014 but restored — despite contributing only about four dollars a year to the local phone company’s coffers — when doing so became an unlikely mission among Facebook users.

(Barry wryly notes that the man who did the repair work used the booth as a kid, when “the sight of Superman’s see-through closet — an arrangement that made sense only if you didn’t try to make sense of it — filled the boy with wonder.”)

There’s Lucin, Utah: “not even a ghost town, where lonely dirt road crosses lonely railroad track, and the most prominent inhabitants are a snake, a beetle and some large ants.” (But down in Houston, there’s a boiler-room telephone-sales operation pitching Lucin as a “high growth” area.)

There’s Ovid, New York, where an inmate at the now-defunct Willard State Psychiatric Hospital chose to dig graves until he died at age 90 and became one of 6,000 souls buried under numbered markers.

And there’s also that big, noisy, well-lit place downstate, where a mere mile separated Hillary Clinton and Donald Trump on Election Night in 2016. Barry tells us about the New Yorkers who happened to be between the two camps. He reports on how the market meltdown in 2008 affected traders who make their living on Wall Street, and he tells us about a New Jersey boy who makes his living impersonating Judy Garland.

Barry’s more in his element in Manhattan, for sure. But when he heads out on what travel writer William Least Heat-Moon memorably called the “blue highways” — the lesser routes on those roadmap thingies we used before the GPS came along — it’s often quite enjoyable to read along.

Randy Cepuch is the author of A Weekend With Warren Buffett and Other Shareholder Meeting Adventures (Basic Books, 2007), a business travelogue featuring visits to shareholder meetings all over the country. He grew up in the city whose team lost the game in Bottom of the 33rd.