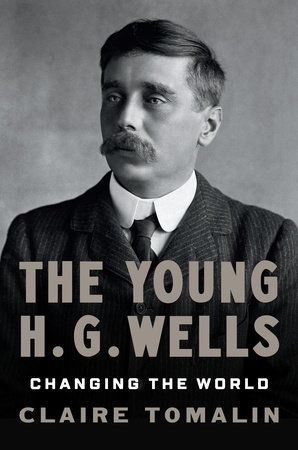 H.G. Wells was fascinated by the explosion of scientific and technological discoveries at the tail end of the Victorian period. During this time, he was also starting to clarify his understanding of England’s social tensions. Wells realized that these two interests could be linked. Science, the author believed, could solve humanity’s problems. And divisions based upon class, nationality, or religious identity could be overcome, he argued, by the creation of a single world government rooted in socialism and led by rational experts trained in the sciences.

Wells combined his political ideology and scientific thinking in the “scientific romances” he wrote in the first half of his life. In 1895, he published The Time Machine, telling the story of a scientist’s travels to a society far in the future, where humans had evolved into two groups: the weak but privileged leisure class of the Eloi and the brutish Morlocks who labored underground — just as England’s poor labored as miners in coal pits or as servants “below stairs.”

By the end of that decade, Wells had published The Island of Doctor Moreau, The Invisible Man, The War of the Worlds, and other novels that not only entertained readers but put forth an argument for the dual importance of science and socialism.

These interpretations of Wells, common in previous studies of his life, are not acknowledged by biographer Claire Tomalin in The Young H.G. Wells. In her subtitle, she implies that she’ll be explaining how the Victorian author was Changing the World. Unfortunately, her narrative does not address this feat.

Instead, Tomalin sticks to a careful recitation of facts, often information Wells himself laid out in autobiographical writings and other publications. Some of these “facts” were merely Wells’ memories or interpretations made years later in public venues, but the biographer uses them uncritically to build her narrative.

Tomalin begins with the details of Wells’ early poverty, his frequently interrupted education, and his ill health. In a strange editorial choice, she sometimes crafts elaborate defenses of Wells and overly aggressive criticisms of those around him. For instance, even though Tomalin describes how his father provided Wells with large numbers of books when he was young and his mother nursed him again and again through illness, she calls special attention to their “failure to help him get higher education,” implying this was a choice rather than the result of financial desperation. She adds that this “did not alter his affection for them [since] perhaps he realized that such a thing [as valuing education] was outside the scope of their imagination of what life could be.”

Tomalin then explores Wells’ first marriage, defending her subject rather than looking at the situation more deeply. She argues that Wells abandoned his disapproval of marriage as an institution in order to wed his cousin, who would not have sex with him otherwise. On their wedding night — “a miserable fiasco” — Wells was “uncontrollably ardent” and “forced himself into” his inexperienced bride, “reducing her to wretchedness and tears.”

Wells believed her reaction meant she did not love him. “And so it was a still more bitterly wounding experience for him,” asserts Tomalin, “than it was for her.” Wells therefore began to engage in “an eventful sex life outside his marriage” simply because “he wanted to escape from the humiliation of his wedding night.”

The biographer’s reframing of marital rape simultaneously excuses Wells’ aggression and erases his wife’s suffering. She goes on to suggest that his wife’s reactions that night justified his future dalliances. Here and elsewhere, Tomalin writes so uncritically of her subject that she seems almost blindly sympathetic to the self-absorbed young man.

When discussing his second marriage, Tomalin calls attention to the lifetime of “scandals…loneliness and humiliation” Wells inflicted on his new wife while he engaged in “public and long-drawn-out love affairs with other women who did their best to monopolize him, bore him children and tried to persuade him to get a divorce.” While this acknowledgment places most of the blame on Wells’ paramours, Tomalin does recognize his wife’s resulting frustration and pain. Nevertheless, she concludes the passage with what one hopes is irony: “All this hardly bears thinking of.”

Tomalin shares a great deal about Wells’ belief in free love and his sexual liaisons and provides a long list of his conquests. She gives a slightly less-detailed rundown of his friendships with various writers and activists. What she doesn’t supply is any significant interpretation of Wells as a writer. Rather, she summarizes the main points of some of his work, declaring it “ambitious” and “absorbing,” and talks about “the virtuosity of the narrative,” all without offering any substantial explication. Further, she refrains from presenting any discussion of how Wells’ writing might illuminate his interior life and thought process — an essential part of a literary biography.

Tomalin also devotes little time to the context in which Wells lived and wrote — an era of major scientific advancements, from the discovery of electromagnetism to the spread of the telephone and early moving pictures. In what ways did his knowledge of Evolution or astronomy (for example) inform his novels? Did particular scientists inspire his plots or characters? How did Wells envision the possibilities of science, and what did he see as its potential dangers? And did science contribute to his rejection of the individualism of the earlier Romantic era and encourage him to embrace the collectivist thinking that defined socialism?

To make the case that Wells changed the world, Tomalin needed to detail why, and how, he was influential. Did his books shape how readers understood science? Did his prophetic vision of the technology of the future (from atomic bombs to a glorified version of Wikipedia) actually fuel its development? Given that he is now remembered almost exclusively for his out-of-this-world tales, what made him turn away from the so-called “scientific romances” that became his legacy?

If anything — though Tomalin barely mentions it — this is how Wells most made a lasting impact: by helping create the enduringly popular science-fiction genre. Here, he was a true pioneer, writing about other worlds and times in ways at once fanciful and believable. He invented literary tropes — from alien invasions to mad scientists — that continue to enthrall audiences, and he demonstrated how tales of imaginative fantasy could be used not only as escapism but as tools for understanding and critiquing social and political issues.

Ultimately, both the young and the more mature H.G. Wells most changed the world by engaging in the project of worldbuilding — when he imagined the people who inhabited the fictional places he conjured and when he worked to reconstruct the real world in which he lived.