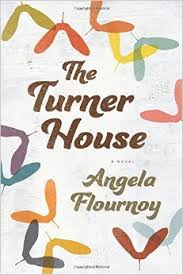 It is spring 2008 and the setting is Detroit’s East Side. Francis Turner has died, and his elderly widow Viola has moved out of the family house on Yarrow Street and in with Cha-Cha, the first of the couple’s 13 children. The old homestead now stands empty, dilapidated, and worth far less than the monthly mortgage payments. What is to become of it?

Angela Flournoy’s delicious debut novel, The Turner House, is set over a five-week period during which the family seeks to resolve this question. It is primarily a novel about sibling relationships, seen from the perspective of adulthood. She focuses primarily on the narratives of three siblings: Cha-Cha, the eldest; Troy, the youngest boy; and Lelah, the youngest girl. A family tree at the front of the novel proves quite handy in keeping all the characters straight.

Flournoy writes convincingly about how sibling relationships carry over into adulthood. While they are grown and lead separate lives, each of these siblings continues to seek autonomy and peace of mind. Perhaps this is the legacy of growing up in a large family, with little personal space. “The Turner children rarely discussed the disadvantages of being one of thirteen,” Flournoy writes. “Scrutinizing too closely why Viola and Francis had not stopped at two, or seven, or even ten children felt like wishing a sibling never born.”

They are also haunted by ghosts, literally and figuratively. Cha-Cha, now in his 60s, has a road accident when he sees a “haint.” His first experience with this haint goes back to his childhood at the Turner house and has become a part of family lore. Whether he is literally haunted, and who believes or doesn’t believe him, worries him over the span of the novel.

Forty-year-old Lelah is haunted by a gambling addiction. She’s been laid off, has nowhere to live, and soon begins an affair with Troy’s good friend David, while also secretly moving back into the empty Turner house.

Unaware of this, Troy, a police officer and war veteran, embarks on a dodgy scheme with David in an effort to prevent the house from going into foreclosure. Troy is tormented by his childhood interactions with Cha-Cha, who he feels controlled and bullied him. As the youngest brother, he is desperate to prove he knows best when it comes to the fate of the Turner house.

Lelah’s episodes with her gambling addiction are particularly intense. She battles her shame and deceit and goes to great lengths to fuel her addiction. When she missteps in attempting to protect her daughter Brianne, the writing is insightful and heartrending but never sentimental.

At one point, Lelah wonders if she’s special, then quickly decides this is “a dangerous selfish notion to leave unattended.” Who but the youngest of 13 children would have such an insight? Later in the novel, she feels sorry for Cha-Cha, Troy, and herself, reflecting that, “Their attempts at getting answers, or respect or even a modicum of stillness inside their own minds were pathetic.”

But none of the Turners come across as pathetic, even at their weakest moments. Haunted as they are by the specters of addiction, mistakes, and the family’s own history, they are well-rounded characters drawn with humor, compassion, and wisdom. Flournoy moves from one point of view to another, handling a range of psychological and emotional perspectives with an alacrity that belies the inherent challenges of this approach. She also has a wonderful ear for dialogue that jumps right off the page.

The Turner House delves into the complex ties that bind siblings and community, as well as the misunderstandings that threaten to divide them. It tells the story of Detroit’s East Side and the history exemplified in a family home, which is of far greater value than the house itself. In a sense, the Turner house is like the dead body of the family life, but the ghost of that family life will never quite be shaken.

Amanda Holmes Duffy is a facilitator for Changing Lives Through Literature through the Fairfax County Public Library and the author of I Know Where I Am When I'm Falling, a novel.