The Tangled Tree: A Radical New History of Life

It wasn’t Darwin’s fault that he didn’t have access to fully sequenced genomes. 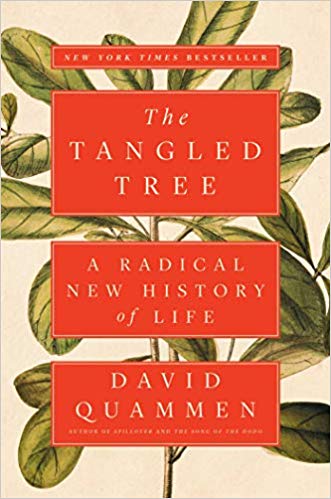 The worldwide influenza epidemic of 1918-19 was accompanied by a strain of bacterial pneumonia that killed millions of people. In searching for a treatment, a British researcher named Fred Griffith discovered that some forms of the bacterium were relatively mild, but others were virulent. He further discovered that combining the live mild form with the dead virulent form created a live virulent form.

It was the quintessential horror story of transformation from the mild-mannered into the Beast, played out in a Petri dish.

Quammen is the master of deconstructing complex, obscure scientific concepts and reconstituting them into coherent, understandable, and illuminating narratives. In The Tangled Tree: A Radical New History of Life, he does this primarily by focusing on the people behind the science who, in a very short period of time — whether working with or against each other — have changed much of what we thought we knew about evolution, heredity, and, yes, the origin (and definition) of species.

The title refers to the common metaphor of the “tree of life” that has been drawn and redrawn, since before Darwin, in our attempts to show the hierarchical and evolving relationships of life forms. In the last 40 years or so of scientific endeavor, that tree has instead revealed itself to be a web.

Serving as the central figure in this narrative is Carl R. Woese, a scientist whose work at the University of Illinois Urbana starting in the 1960s eventually made him the father of a branch of science now known as molecular phylogenetics. Woese’s interest was in discovering the oldest origins of the genetic code and figuring out how it evolved. He was attempting to go all the way back to the beginning.

In the years before complete genomes of various species were mapped, before computer-based sequencing was possible, this work involved a mind-numbingly manual and dangerous process of RNA sequencing that helped to reveal degrees of ancient relatedness, something never before possible.

It was Woese who demonstrated that, beyond prokaryotes and eukaryotes — the two scientifically accepted kingdoms of life at the time — there was a third: the archaea. He called the resulting new diagram of evolutionary relationships “the Big Tree.”

From that discovery, published in 1977 — which did not go over well, in part because of the disastrous use of a press release to announce it — the narrative shifts to the work done by Lynn Margulis, who was interested from the start in evolutionary genetics, and did much to articulate a concept called endosymbiosis.

The question was: How did cell complexity originate? The answer, refined and confirmed through related work, was that it started with “captured bacteria.” In a process roughly analogous to the domestication of wolves into dogs, captured bacteria was incorporated into unrelated genetic material, eventually evolving into mitochondria and chloroplasts, which in turn led to the rise of the nucleus-bearing cells of the eukaryotes. In a specific example of endosymbiosis, a captured retrovirus was responsible for the development of placentas in mammals.

Then, along parallel and related paths — and championed by Ford Doolittle, another leading voice in microbiology — came the emerging picture of horizontal gene transfer, in which heritable genetic characteristics pass sideways from one species to another, even across kingdoms.

This “infective heredity” has some unpleasant implications. It allows a bacterium to share its exceptional adaptive features immediately with its neighbors, no longer beholden to the far more time-consuming and inefficient method of generational inheritance.

Some scientists posit that bacteria share, shed, and pick up genetic traits almost seamlessly, based on prevailing environmental factors, in a way that makes them seem like one vast interconnected organism — much like how “the wave” progresses through a packed stadium.

As Quammen muses, “If genes cross the boundary between one species of bacteria and another, then in what sense is it really a boundary?”

Nor is the phenomenon unique to bacteria. As more and more genomes are mapped and made publicly available, opportunities abound for finding cases of widespread and recent instances of HGT, many high up the evolutionary chain. With all that promiscuous sharing of genetic codes, scientists like Doolittle argue that any depiction of life as a tree makes no sense. Everything is far too intertwined.

So what does any of this really mean? The author builds his narrative toward laying out “a new appreciation for the composite nature of human identity.” As just one example, he offers, “The fact that endogenous retroviruses constitute eight percent of the human genome certainly complicates our sense of Homo sapiens as a species of primate.”

That’s an insight we could not have achieved until very recently. Our deeper understanding of life has always depended on improving technology, starting from Antoni van Leeuwenhoek’s initial glimpse of “animalcules” through his first microscope.

But more than that, it depends upon the boundless, dogged curiosity of the people behind that technology. Quammen delivers a compelling story of these sometimes brilliant, often prickly individuals who never stop wondering, thinking, asking questions, and then applying themselves to search for an answer.