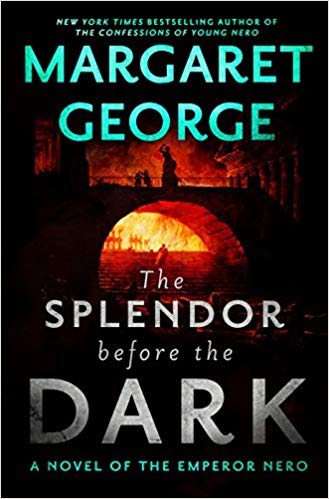 A funny realization comes over the reader of Margaret George’s The Splendor Before the Dark in the first four or five of its 76 chapters: The author is sympathetic to Nero!

Now, scour your memory banks about Nero: He danced while Rome burned…killed his mother and first wife…persecuted Christians. He was a heedless tyrant.

George, who has written seven other “epic fictional biographies,” tells us herself, in the afterword, that the historians, upon whose narratives we base our perceptions of Nero, were all biased against him, and that it’s time for us to consider the man in a more reasonable light.

The Splendor Before the Dark is the second of a two-volume set on Nero, who died at 35. If you’ve never used your imagination to see the Caesars and the lives they lived (or if you’ve never watched PBS’ “I, Claudius”), George’s books vividly present the drama and glory of ancient Rome. You will see it.

It starts with the Great Fire, at a moment when Nero is actually outside the city. His first action in the book is to go back to Rome, to witness the fire, to assist. But the city is devastated, essentially destroyed after burning for over a week. Nero’s skin is reddened. His hair is singed. He stops people from continuing to set blazes. He can look back at his efforts with some pride.

Yet, here is where a pattern is established that repeats throughout the story. Nero likes what he’s done. But he hears gossip that nobody in his circles is satisfied with him. He hears rumors that he played music while the city burned. He even hears that he started the fire himself. But that is patently absurd because he was out of town.

How can people believe such ridiculous things? Well, maybe they know the story of his ascension to the throne, the matricide, the uxoricide. But, in Nero’s mind, he had no choice. If he hadn’t killed, he would have been killed. He was, as Curly Howard used to say, “a victim of circumstances.”

Nero, like Prince Charles of England, is conflicted about his role, his identity, but he sees himself foremost as an artist. And his attraction to art is partially his undoing, even as he tells himself that he can and must act as the ruthless emperor.

He’s not a military conqueror. He acts on stage, he performs for the public, even once behind his second wife’s death mask. He plays cithara and composes lyrics. He races chariots. He even leaves Rome for more than a year to participate in a variety of Greek games and competitions. He thinks of himself as a classicist.

But these interests, and his indecisive nature over ruling, plus his naivety, his feelings of innocence, of being badly used despite good intentions (and good results, if he says so himself), separate him from the elite families of old republican Rome.

Here is Nero’s response when Seneca is discovered in conspiracy against him:

“Was that what he thought of me? That I was a tyrannical madman? Why would he think that? But the only thing that mattered was that he did think it.”

After tiring of the rumors about his starting the Great Fire, Nero decides to blame the Christians, and rounds up hundreds, having them crucified and set upon by wild animals in gladiatorial games. Surely, he was focused on the performance (just as another contemporary would-be tyrant in another deflating empire).

Were all his heedless, self-oriented performances for Rome or for personal gain?

As emperor, Nero is allowed to have it both ways. In fact, he can have it a third way, as well, because once he has a dream that he is Apollo, the sun god, he acts as if everything he does is inherently divine. This doesn’t ingratiate him further with the Senate or the aristocracy, and it doesn’t help him win over the people.

Eventually, Nero’s nemesis arrives from an unexpected direction and source: the generals of the western empire, particularly Gaul. The vast complexity of the Roman empire can’t be taken for granted anymore. Such an empire can only be run intentionally. He’s just 35, so he tells himself that he can escape to Egypt to live in peace, and he attempts to get there. But, like Muammar Gaddafi, his flight rapidly deteriorates from a dream into an appointment with fate.

The author is meticulous in her mise en scene, the varying types of clothes, the jewelry, the layout of the cities (there are two maps of Rome in the preface), the way slaves and centurions stay nearby, the pointed dialogue in the emperor’s box at the Neronian Games. It’s an epic book with epic sweep and a great deal of historical research to support it.

George is masterful with narrative, but the reader is likely to recognize the various times the dialogue sounds like 20th-century Hollywood, with repetition that might judiciously have been edited out. The Nero novels are big, long books that are somehow also quick, easy beach reads. And, still, the reader feels virtuous for learning about history while examining the prurience of the Caesars.

And, most surprising, you may well wish that things had turned out better for Nero.

This taut thriller tackles the perils of going home again