The Sea Queen: A Novel 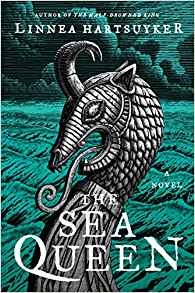 It can be hard, in our time of relative plenty, to remember how dangerous and tenuous life was for so many humans, and for so long. But we don’t have to look far back in history to find the devastating evidence of our frailty and, yes, cruelty.

Linnea Hartsuyker turns the pages of the history books relatively far back, to 9th-century Scandinavia, when King Harald was attempting to unite all of Norway. But her writing is immediate and urgent, and she bridges the chasm of those centuries with a breath.

That intimacy in her work makes the cruelty of the time all the more striking. This novel is the second in her Golden Wolf Saga trilogy about the siblings Ragnvald and Svanhild, both caught up in the myth-making in King Harald’s wake, and the pain they live with would seem unbelievable if Hartsuyker were not such a talented writer.

In Ragnvald and Svanhild’s world, summers are for raiding and warring, while winters are for clinging to survival. Children die, wounds fester, and enemies burn. In the first gripping book, The Half-Drowned King, Ragnvald swore himself to King Harald in hopes that Harald’s vision for a united land would finally bring peace to the farmers weary of defending their homes from neighboring raiders, and the mothers terrified of being sold into slavery along with their children.

This book begins six years after the first one ended, and the pause feels perfect. Ragnvald is now a king beneath Harald, but he fears his dominion is in name only, since Harald has him out warring all the time. In the first chapter, a party of warriors takes over Ragnvald’s small kingdom in his absence.

Svanhild, who in the last book left her devastated older brother in favor of his enemy — and her soulmate — Solvi, now is unhappy in her marriage to that marauding ship captain and worried about her young son’s delicate health. All the characters, even Harald, have matured in the years since we left them, and this novel benefits handsomely from their additional wisdom.

When Ragnvald conceives of a daring political gamble that will cost him deeply, he has the honor and wisdom to apologize for his failings. When Svanhild’s life collapses around her, she has the self-confidence to eventually pick up the pieces. She is, as her brother notes, named “swan-battle,” and she is both as fierce and as elegant as her name suggests.

The story picks up speed when an enemy tricks Ragnvald’s forces into injuring his own allies, and a pre-existing political resentment between those allies begins to boil. The wounds, both physical and political, eat away at Harald’s delicate web of alliances. The political machinations resulting from the colliding ambitions of Harald, Solvi, and other grasping men then drive the novel’s plot.

This could make for dry reading, if Hartsuyker weren’t so damn good. Instead, her Ragnvald, Svanhild, Solvi, and other characters have set their grappling hooks into the reader’s heart. As with The Half-Drowned King, Hartsuyker gives us flawed yet sympathetic characters who each have a reason to earn our affection, and whose interests are pitted against one another. Someone will suffer.

The political alliances in this book are dense, and ties range from Dublin to Sweden. Readers who haven’t read the first novel might struggle to keep Hakon, Heming, and Harald straight, but Hartsuyker provides enough gentle explanation that I suspect the task is manageable.

The effort, certainly, is worthwhile. This book is among the best I have read this year, and it deserves as many accolades as we can heap upon it. My heart still aches for Ragnvald and Svanhild and their impossible choices, all spun across a vivid historical world that ought to bring nightmares but instead mixes beauty with acceptance. What stands in relief is our shared humanity. Our love for families, our willingness to take risks for those we love, our ambition, our greed, our pride.

Early in the novel, an older woman who befriended Svanhild bids her farewell. “‘Be safe and brave and free,’ said Unna, a blessing said sometimes by wives sending their warrior husbands off to battle.”

Such is the ethos of this striking novel. Hartsuyker’s characters may want to be safe, they may struggle to be brave, but they will be nothing if not free.

Carrie Callaghan is a senior editor with the Washington Independent Review of Books, and she lives in Silver Spring, MD, with her family. Her debut novel, A Light of Her Own, is forthcoming in November. Find her on Twitter at @carriecallaghan.