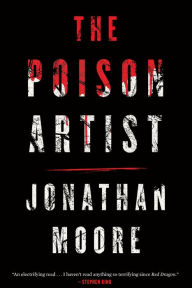 The opening pages of Jonathan Moore’s new psychological thriller, The Poison Artist, are intriguing. As this San Francisco-based novel begins, Dr. Caleb Maddox is looking into his hotel room mirror, examining tiny slivers of glass lodged under the skin of his forehead. The slivers came from the tumbler his girlfriend, Bridget, had thrown at him in their shared home earlier that night. What was she so angry about?

Caleb goes down to the hotel bar, aptly named the Pied Piper, to have a drink. He glances at a newspaper left on the bar. Its headline reads: “CHARLES CRANE MISSING 10 WEEKS. POLICE: ‘WE NEED LEADS.’” Caleb thinks to himself that he knows what being missing feels like: “The hard part didn’t start until they found you. If you couldn’t give the right answers, people looked at you sideways for the rest of your life.”

Had Caleb been a stolen child?

A mysterious woman in a black satin dress, and with long black hair, her skin “as soft as a white oleander petal,” her scent “like a flower that only blooms at night,” enters the bar, studies each man in the room — then turns and leaves. Later, at a second bar, she appears again, this time approaching Caleb and introducing him to Berthe de Joux — absinthe. The woman will not tell him her name, but whispers a half-promise and leaves him in the bar, “her hair swaying against her naked back as she walk[s] away from him.”

We soon discover that the missing man, Charles Crane, is only one of several men later turning up tortured and dead, with thujone, a component of absinthe, in their system. Might the mystery woman be a siren luring men to their demise?

Because Caleb is a toxicologist studying the chemical effects of pain, his old childhood friend Henry, now a medical examiner, asks him to help analyze the chemical aspects in the post-mortems of the murdered men. But Henry insists Caleb’s analysis be done in secret. His testimony in court would be invalidated. Why? Why can’t Dr. Caleb Maddox be an official consultant?

These questions set up an engaging mystery. The dark, evocative, almost gauze-like scenes with Caleb’s mystery woman promise an alluring update of the noir genre, and the novel’s last hundred pages move very quickly. That said, it does have a few weaknesses. First amongst these is pacing.

Caleb and Henry’s exchanges concerning toxicology slow the story’s movement. Some information delivered in these scenes is necessary to the plot, but it often feels like we’re given more than needed in a labored effort to ensure the scenes are faithful to what medical examiners do.

Furthermore, we’re told repeatedly that Caleb suffered some family tragedy; that, as a child, Caleb disappeared, and that the detective on the current serial murder case found him. But Moore does not expand or build upon these basic facts, holding back the crucial information until his revelations at the end of the book.

While thrillers don’t need every point tied up in a neat bow — indeed, are often better for leaving some loose ends for the reader to ponder — information provided should have purpose, and important questions should be resolved. Moore’s failure to do so may leave the reader unsatisfied.

For example, Bridget and Caleb break up because he had an unidentified, “reversible” operation without telling her. If the kind of operation is not essential to the story, why make it a mystery? If it is essential, then we should discover — at some point — what the procedure was and why he had it.

Also, early in the novel, Caleb asks Bridget whether he walks in his sleep. She responds, “Jesus, Caleb.” Some pages later, Henry asks whether Caleb remembers his argument with Bridget. Moore writes, “Caleb felt like they were playing chess. Except Henry was the only one who could see all the pieces. Caleb didn’t know what he stood to lose, but he was sure he couldn’t win anything in a game like this.”

Caleb’s concern about his possible sleepwalking is then dropped from further reference or development. These repetitions and omissions make the book feel somewhat forced in its construction.

Finally, Caleb’s character and internal struggle are not fully fleshed out. When peculiar events occur, one would expect a scientist — even one under emotional distress — to question them. If he stops questioning, one would expect this change in behavior to develop during the course of the novel.

Thus, while Caleb is mesmerized by his mystery woman, one would nevertheless expect him to question her ability to get him into deserted bars and houses. One would further anticipate that, when she tells Caleb of the strange man who raised her, he would recognize the parallels in their childhood traumas. But Caleb never questions; he accepts and follows.

Despite these weaknesses, however, the atmosphere created, the action in the latter part of the book, and the story’s resolution all make this thriller an enjoyable read — albeit one less powerful than it might have been.

Jessie Seigel is an associate editor at the Potomac Review. Her fiction has appeared in numerous publications, including Ontario Review, Gargoyle, and the anthology Electric Grace. She also writes on writing at The Adventurous Writer.

The Sworn Virgin: A Novel

After taking a vow of celibacy in an oppressive society, a young Albanian woman finds love