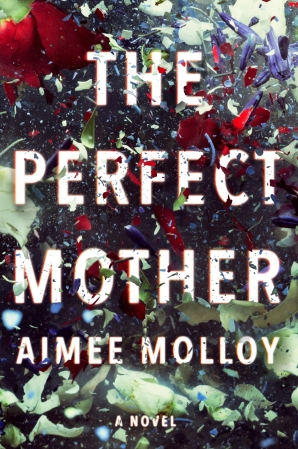 When I was a brand-new mom, a friend — who could get away with it — said, “Congratulations, everything is your fault!” And it is. Or at least, you’d think it were if you dip more than the tip of a toe into the cultural discourse (perhaps a generous term for it) on motherhood in America.

Mothers are revered and reviled, praised and marginalized, unable to keep it together and somehow balancing it all. In other words, we’re human.

In The Perfect Mother, author Aimee Molloy throws all those expectations and experiences, all that societal and personal pressure, into a blazing crucible by zeroing in on a group of first-time parents in Brooklyn.

The “May Mothers” meet through a website called “The Village,” a local community-building outfit that aims to connect new parents with resources and each other. The site’s chipper emails on various and rife topics such as breastfeeding, losing weight, and milestones for baby serve as chapters openers and are enough to set any recent parents’ teeth on edge.

We meet the group as their babies near the 2-month-old mark, a particularly fraught and exhausting point. Some of the mothers navigate a return to work, while others bicker over balancing childcare responsibilities so they can return to a semblance of their former selves. Everyone is tired, and virtually no one is happy. As the summer heat builds, they plan a July Fourth outing.

A wide spectrum of middle- and upper-class amalgamations are accounted for in the group’s stalwarts. There’s the mom who has to go back to work sooner than she wants because she’s the primary breadwinner and her bosses are pressuring her (Nell); the mom who’s staying home and trying to support her husband’s fledgling business as they struggle to make rent (Francie); the token dad who the moms assume is gay, and whom they literally nickname “Token” (Daniel); and the mom married to a buzzy novelist whose own career as a ghostwriter is stalling out (Colette).

And then there’s Winnie, always at the periphery, always a little mysterious, a quiet and devoted single mom who they learn more about after her son, Midas, goes missing on the very night the moms go out on the town.

Midas’ disappearance and the consequences read like a modern retelling of the Lindberg Baby saga. Midas vanishes from his crib while the babysitter sleeps in the living room; his mother — it turns out — is a famous actress who starred on a cult-hit show as a teen, and the media have an absolute field day.

In fact, my favorite scene in the novel involves a Nancy Grace-style cable-news host named Patricia Faith, who films a standup shot by Winnie’s apartment. Faith stops a mom with a double stroller, who basically tells her where to go and how to get there, when Patricia starts asking questions that clearly condemn the May Mothers for meeting in a bar. The TV is turned off all too soon by Nell, through whose eyes we watch the event unfold.

Overall, the women are imperfect in that very real way that we all are. Some are more finely rendered than others, and somewhat intentionally so, as they’re all hiding some kind of secret meant to keep us guessing. Winnie, the one experiencing the worst nightmare come true, is not the focus of the novel. She remains on the sidelines, and we largely get to know her through media coverage consumed by the other moms.

Instead, we get a front-row seat as the other parents cope with the tragedy, the pressure, and the suspicion that follow Midas’ disappearance. We do hear directly from the person whodunit, but their identity is revealed in the denouement, which I’d never spoil for you. There is a quick flash ahead that closes out the novel. It’s marginally satisfying in the way that tough endings always are. Some things are cleared up, other red herrings are left to rot.

The other important thing to note about the experience of reading this book is that it doesn’t come to us in a vacuum. It’s the latest in a number of recent psychological thrillers that seem tailor written for film adaptation. The cover and naming conventions even mirror some of them.

Rarer, still, is the experience you have with The Perfect Mother. You know at once, if you glance at the blurbs, that a film version is coming, with Kerry Washington set to star. Does that shade your reading of the book? Does it matter?

It does, I think, on both fronts. Especially for readers who’ve seen “Scandal,” and I wager the Venn diagram of the audience for each is nearly a neat circle. I pictured Winnie as Washington and, as extension, a version of Olivia Pope at her most polished and most desperate.

Tayla Burney is a freelance journalist and writer who worked for years as a public radio producer. An avid reader and passionate literacy advocate, she writes a weekly newsletter called Get Lit, D.C. that highlights literary events in the region. She tweets entirely too much at @taylakaye.

An entertaining, nuanced story of race, envy, and the limits of friendship.