The Old Place: A Novel

Life in a small town can be both stifling and surprising. 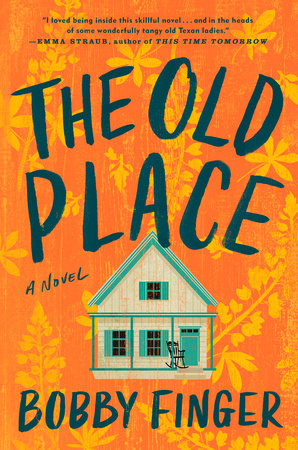 I admit it: Any book that uses the close parsing of a newspaper obituary as a plot point has already won me over. “This was like no obituary she’d ever read,” a character thinks to herself in The Old Place before surpassing even the most earnest English major in the level of textual analysis she applies to a single death notice.

More widely read than haikus but written with the same degree of provocative conciseness, obituaries are the lifeblood of hometown papers, and The Old Place, the debut novel from journalist/podcaster Bobby Finger, is nothing if not aware of small-town mores. If you don’t appreciate discussions of potato salad recipes, emotional breakdowns in the Cracker Barrel by the highway offramp, or the social implications of installing an inground pool, this book may not be for you.

But if you get a tingle from phrases like “traumatic mayonnaise-based memory”? Pour a glass of Yellow Tail and settle in.

Finger grew up in a small town, and Billington, Texas, is the fictional burg where he lays his scene. Mary Alice Roth reigns as Billington’s cranky matriarch, presiding over the annual Catholic church picnic with an iron fist and doling out potluck assignments based on who’s pissed her off that year and needs to perform “culinary penance”: Beans for the saved; labor-intensive potato salad for the sinners.

Mary Alice spent her whole career as a math teacher in Billington. Intimidating to students and parents alike, her reputation precedes her in the community but also protects her from facing more personal truths outside the classroom. Recently forced into mandatory retirement by the school system, she finds herself with unwanted free time — “monotony was only acceptable if imbued with a greater purpose” — and a curdled, if misplaced, anger at her replacement.

Her days now wide open and endless, Mary Alice rekindles a friendship with a neighbor, Ellie. They’d been close once but drifted apart after the concurrent deaths of their teenaged sons over a decade earlier. There are hints that all was not well between the women even before their sons’ passing; the novel’s early chapters showcase Finger’s wry touch in portraying the entangled dynamics that become baked into people’s lives. Dry, isolated Billington is a kiln, hardening reputations and, as Mary Alice reflects, never giving anyone “enough distance to forget.”

The story turns on the arrival of Mary Alice’s estranged younger sister, Katherine, who flies in from Atlanta with news that changes our understanding of Mary Alice. Katherine wants her sister to return to Georgia to confront unresolved issues, but Mary Alice refuses to go until after the upcoming church picnic. Duty calls, after all.

Secrets start to seep out in the few days between Katherine’s arrival and the picnic, drama accumulating like slabs of brisket piled onto white bread. Like an overstuffed sandwich, the sheer volume of revelations placed in front of readers can be too much to swallow. The last quarter of the book goes quickly as accusations, realizations, and storylines mount. Confusing flashbacks begin to accumulate. Who knew what about who when? I often found myself asking.

Still, my affection for the tale remains. It’s like a good friend telling you a story you can’t always follow: Sure, you could use more information, but you’re not going to interrupt them when they’re on a roll. And Finger is mostly on a roll here. His narration comes with a knowing charm, and his portrayal of small-town life thankfully fits on the entertaining side of the Stars Hollow quirky-to-annoying matrix.

The old place of the book’s title is a lakeside shack outside Billington. To reach it — there is no map — you have to know which unpaved paths to take. It’s been in Mary Alice’s family for a long time and turns out to be the origin of most of the trials and tribulations in the book. Events that happened at the shack decades ago might as well have happened last Tuesday, for the grip they still have on folks.

The Old Place is a novel that evokes a place more than it explains that place’s pull on the people around it. It’s a yarn, it’s a love letter, and it puts an obituary center stage. Throw in a stoplight or two, and what more do you need?