The Mermaid of Black Conch: A Novel 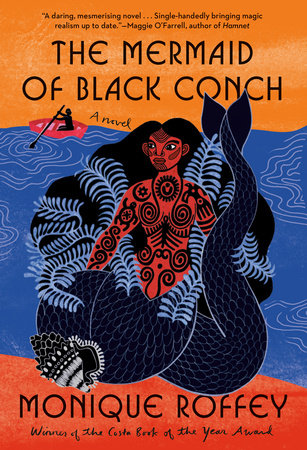 A wealthy American and his law-student son head to the Caribbean for a little sport-fishing action and get a whole lot more than they bargained for when they snag a mermaid.

This premise may sound outlandish, but the strange magic in The Mermaid of Black Conch is the best kind — wondrous, amazing to all who encounter it, but utterly real. So real that the novel’s characters have no choice but to accept it and ride the wave of trouble that it brings.

As in other works of magical realism, the miraculous here is woven into the fabric of ordinary life, but one thing that’s different about Monique Roffey’s lauded book is that its characters — from the Americans to the locals who befriend (or, in some cases, threaten or resent) the mermaid — recognize the magic as thoroughly implausible.

Roffey is absolute in her commitment to the head-to-tail reality of her mermaid, Aycayia, which is key to the success of this wild, engaging story. And what a mermaid she is! When David, a laidback Rasta and sometime fisherman, first sights her near the fictional island of Black Conch, he sees “one big tail fin, big like a pilot whale.”

This is no petite creature curled up demurely on a rock. “Yards and yards of musty silver” is how he describes her tail, and her long hair is a Medusa-like mix of seaweed and writhing, stinging ocean creatures.

From there, the book shifts to a scene that is nothing short of astonishing, in which the visiting Americans take on the mermaid in an epic fishing fight that out-Hemingways Hemingway from start to finish. In the book’s acknowledgments, Roffey notes that this vignette is partly homage to Hemingway’s Islands in the Stream. If anything, it’s even more powerful for the way it compels readers to witness the treatment of the woman-fish as both of those things: woman and fish. In truth, the distinction is lost on the men. In this scene, at least, she is merely a trophy, commodity, animal, object, Other.

“That thing must weigh six hundred pounds,” marvels the father as the merwoman dives deep below the surface of the sea. “Man against catch to the bitter end,” he muses. If such drama, brilliant in its concept and execution, sounds off-putting, don’t be deterred. In the pages that follow, there is abundant tenderness, generosity, family, and community. There is exuberant sensuality and love, too, antidotes to the brutality of that earlier battle.

Aycayia’s clash with the American fishermen is reminiscent of the experiences of the marginalized and mistreated everywhere, including the enslaved people whose descendants on Black Conch are at the heart of the story. Race relations on the island are as complicated as Aycayia’s hybrid identity, and Roffey explores them with both boldness and subtlety.

Expectations around race and gender get mixed together: “Black Conch men roamed; their women stayed still. That was a rule, even for a woman like Miss Rain.” The latter is a reference to the island’s white landowner, whose tenants include almost everyone in the community. Rain is pondering Aycayia’s troubles but could be thinking of herself when she observes, “Womanhood was a dangerous business if you didn’t get it right.”

As the characters consider these matters, it becomes clear that The Mermaid of Black Conch is a story of how we think of ourselves and how we treat each other. It’s about what it means to be a woman or a man, and also about being an animal, which, of course, we all are — although, unlike Aycayia, we tend to forget it too easily.

After the spellbinding fishing scene, the narrative never returns to the same level of suspense, though it’s well paced and cleverly structured, with multiple narrators, including the mermaid herself. The middle of the book is slow by comparison, but there is plenty of dramatic action to come as the story heads toward its conclusion.

Aycayia is fascinating, although she doesn’t feel as fully developed, as “real,” as the other characters. But this is understandable; she is not of this world. She is an ancient being, cursed to roam the sea forever, created by the author out of the myths of the long-lost Taíno people of the Caribbean.

Roffey’s writing is a delight to swim in. It’s lyrical and lovely, and it flows clear and deep as the waters around Black Conch. Her landscape descriptions are rich, whether she is painting pictures of the lush forest shading Miss Rain’s house or of the ocean:

“The sea was flat and turquoise in the shallows, purple in the deep…The sea was the giant woman of the planet, fluid and contrary.”

The author, who has written several other novels, lives in London but hails from Trinidad, which helps explain the authentic feel of the culture and language on every page. Powerful, radical, and wholly original, The Mermaid of Black Conch won the Costa Book of the Year Award when it was published in the U.K. in 2020. We are fortunate that Aycayia has now arrived on our shores.

Sally Shivnan is the author of the short-story collection Piranhas & Quicksand & Love. Her fiction and essays have appeared in the Georgia Review, Antioch Review, Glimmer Train, and other journals, and her travel writing has been featured in anthologies including Best American Travel Writing, as well as in the Washington Post, Miami Herald, Nature Conservancy Magazine, and many other publications. She teaches at the University of Maryland Baltimore County (UMBC).

An Egyptian journalist with a newborn baby commutes between Cairo and Baghdad during the turbulent 1970s.