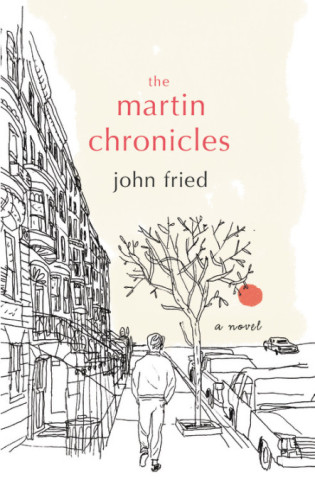 John Fried’s debut novel, The Martin Chronicles, transports readers back in time to New York City in the 1980s, and back to the years between childhood and adulthood, seen through the eyes of Martin Kelso. He is an ordinary boy — from a safe and privileged family, with both parents present — in whom no particular gifts or passions have yet emerged.

The title of the novel is a deliberate evocation of The Martian Chronicles, a book young Martin tries to read one summer, having picked it up thinking he saw his own name. He doesn’t get past the first page. But Ray Bradbury’s story of a journey into a different world inhabited by strangers clearly resonates with Martin’s own journey of discovery.

The 10 chapters comprising Martin’s chronicle take him from sixth grade through his senior year of high school. The events in his life that he’s most concerned with are ordinary. There’s the shock of being in the company of girls when his private school goes briefly co-ed, and the attraction he feels for one of them that results in him pocketing her retainer in a move he can’t understand.

A string of muggings in his neighborhood inspires a childish game with his friends, abandoned when kids he knows become victims. At camp, he goes along with the bullies, betraying the one actual friend he had made. His cousin Evie — wild, rebellious, and four years older — kisses him.

And so Martin’s life unfolds in small events that leave him a little older and wiser. He finds a girlfriend, wings his way through college interviews, and experiences his group of friends growing apart.

Martin is not a particularly thoughtful or introspective character; he never explicitly questions his choices or thinks in any meaningful way about his future. He is no Holden Caufield, nor is he meant to be. He does not set out to disturb the world as he knows it, yet events transpire that shake his reality (though they are tremors, not earthquakes) until the last chapter of the book, when actual tragedy strikes.

Martin struggles to make good decisions, but he doesn’t obviously learn from his mistakes. Instead, Fried expects the reader to assume that he is growing in character, presenting Martin with issues bigger than his own quotidian concerns.

Each of the chronicles is a standalone story in its own right, with characters from previous years sometimes reintroduced as if they’re new. There is no driving plot, and no goal to Martin’s life. The development of his character is the inevitable result of life happening to him.

Those looking for a narrative with a hero will perhaps be disappointed, yet the passivity of Martin’s journey is in a very real way an asset for readers who don’t demand a plot that pushes events forward toward a resolution.

Further, the distance between the reader and Martin provides readers space to insert their own feelings and perspectives on the happenings of his life, ultimately allowing their own memories and experiences to come to the fore.

The last of Martin’s chronicles is the strongest and most moving of the book. It ends with Martin making a wall of sand on the beach in honor of someone who once loved to build walls protecting Martin’s own childhood castles, and who raged against the sea that inevitably washed them away.

This poignant metaphor beautifully captures Martin’s life as a teen, in which security and the comfort of the ordinary are gradually, inexorably eroded. It won’t be enough for everyone, but those looking for well-written nostalgia that seems almost autobiographical will find it absorbing.

Charlotte Taylor is an archaeologist for the State of Rhode Island by day, and a voracious reader by night! She reviews books at her own site, Charlotte's Library, and at the Barnes and Noble Kids Blog.