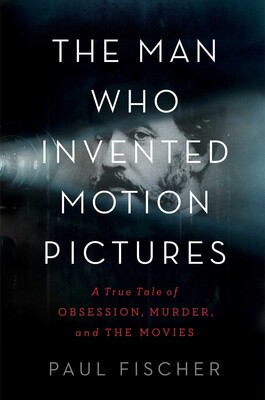 By the late 1880s, inventors on both sides of the Atlantic were tinkering with motion-picture machines, mostly mechanical devices that shone bright light on or through a succession of still photographic images — themselves the products of a relatively new technology — to create the illusion of realistic motion.

In one variation on this notion, a single onlooker would peer through an eyepiece into a self-contained box. In others, the device cast the “moving” image onto a screen for multiple viewers to watch collectively.

In the public mind, the presumptive inventor of this latter projector was Thomas Edison, that luminous avatar of all miracles electrical. But author Paul Fischer suggests that our long-revered “wizard of Menlo Park” was not at all the dogged, introverted researcher many of us have been conditioned to idolize. In his thoroughly engrossing The Man Who Invented Motion Pictures, Fischer suggests that Edison was as much a duplicitous businessman as the steel-in-the-spine American icon portrayed onscreen by Spencer Tracy.

Fischer’s Edison, it seems, was not above fielding archly underhanded schemes to preserve his market dominance and public image. Other commentators have also painted Edison in these darker shades, but Fischer goes them all one better, floating the notion that Edison was a prime mover in the disappearance and possible murder of a rival who was besting Edison’s team in the race to release a revolutionary projector.

That rival was Louis Le Prince, a native Frenchman and naturalized U.S. citizen. Le Prince was a scientific loner, a brilliant obsessive entangled in a perfectionistic quest for a magic motion machine. In 1888, he’s making impressive strides toward a working, marketable device, thanks to an innovation from pioneering chemist George Eastman: a durable celluloid film that could carry a sequence of still images on a spinning sprocket.

(Previous approaches relied on a fragile spool of imprinted paper or, alternatively, required a mechanically advanced sequence of heavy glass plates that carried the still pictures. Both types of machines were subject to frequent and disabling breakage of the image media.)

Based on Eastman’s breakthrough, Le Prince ultimately files patent applications covering the key features of his own new device. Soon afterward, however, on the way from his ancestral home in France to his workshop in England, he goes missing.

And is never found.

Meanwhile, the Edison company, not far behind in its own project, files a patent for a similar device. Le Prince’s wife protests a prior claim on her husband’s behalf but, in the absence of evidence confirming Louis’ death, is impeded for years in asserting his patent rights. She spends the remaining decades of her own life vainly attempting to uncover what happened to him.

Yet this diverting mystery — and Edison’s putative involvement in any crime committed — is only the headline here. A fascinating sideshow for sure, and arguably a marketing tease. But make no mistake: The Man Who Invented Motion Pictures delivers much, much more.

From a broader perspective, Fischer’s narrative is a compelling saga of both familial and scientific struggle. Throughout, he shines a brilliant light on the succession of major players searching for the keys to motion-picture technology, mechanical as well as chemical, both stateside and abroad.

The author offers fascinating coverage of, among other aspects, Edward Muybridge’s work with successive still images of human and equine locomotion, not to mention the gimmicky “magic lantern” devices that preceded Edison’s and Le Prince’s nearly simultaneous breakthroughs.

He also dives deeply into the internal workings at Edison’s New Jersey labs, with a wide-ranging dissection of the company’s business model and much reportage on its internal management practices, rivalry, and endemic dissension. Most fascinating of all, at least for this reader, is Fischer’s discussion of the Le Prince family dynamic: an accomplished wife (arguably more celebrated among contemporaries than Louis himself), a raft of children, and their touching attempts to lead a satisfying life spread out between a home in New York and Louis’ workshop in England. Le Prince’s mother and brother, resident in France, add yet another layer of complexity, as the attentive reader will discover.

So, Fischer trails out a theory of murder at the center of his story, but it’s a pretty thin bit of earnest (and somewhat labored) speculation. Almost as an afterthought, he brings forward a more believable if less interesting suspect than Edison with a more plausible motivation for the crime. Like Dame Agatha, he saves a possible solution for the end, and it makes painful sense, like most murders.

Bob Duffy, a former academic and retired advertising agency vice president, is a writer based in Columbia, Maryland.

Interracial attitudes in the aftermath of the Civil War.