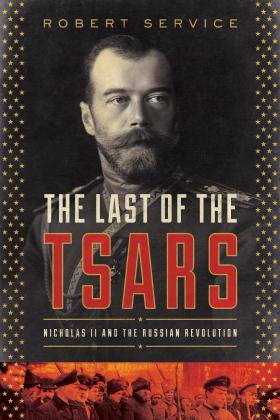 Unlike Lenin, Trotsky, and Stalin, of whom Robert Service has written separate biographies, Nicholas Romanov did not author history. He lost. His totalitarian entitlement destroyed his perceptions of the unrest in his country, the ruin that Russia was becoming in the lead up to and during World War I. Service tells of Nicholas’ character flaws, but, because this book starts at the abdication, Nicholas himself shows no stress about ruling.

Nicholas was not a reflective man, so once he was out of power, his main concerns came to be keeping his family safe and productively occupying his time. To Service’s credit, the imaginative reader will wonder throughout, “Did they feel the noose tightening around them in real time as I sense it?”

After the abdication, the Romanovs took refuge in Tsarskoye Selo, their palace compound in the suburbs of St. Petersburg. Stripped of power, the family maintained their entourage, comfortable living, and freedom to wander the extensive and beautiful grounds. Nicholas and Alexandra attempted to leave Russia, Service writes, by prevailing upon Nicholas’ cousin, King George of England. Alas, George was politically unable to show pity, afraid to give socialists and radicals in England cause to bring their anger against a tyrant into the streets.

Once escape became impossible, the walls of their prison thickened. But even though Nicholas had been deposed, Alexander Kerensky, the leader of the first (and short-lived) representative government in Russia, showed him deference and respect. Perhaps he would have eventually brought Nicholas back to St. Petersburg for a trial, but in the first months of his government, far more desperate issues had to be acted upon. The Romanovs were passive participants when Kerensky decided to move them to Tobolsk in western Siberia.

The author identifies the books Nicholas read and how they might have affected him in those days, saying that Nicholas was raised to be tsar, answerable to no one. “Nicholas was a human fortress. But he was a fortress with a heart.” He loved to read to his family from Chekhov and Arthur Conan Doyle. For his own entertainment, he read military histories by Kuropatkin and Uspenski. His favorite series of books, though, was Christ and Anti-Christ by Dmitri Merezhovski.

Merezhovski examined, in each book, historical dramas from the Roman empire to the rule of Peter the Great. When Nicholas read Peter and Alexei, he felt a “heavy impression.” In fact, he did not care for Peter’s modernizing ways, and was horrified that he killed his own son. That “Nicholas had given up the throne rather than be separated from his own child” helped him find “some solace in this literature during his own period of drama.”

Kerensky’s grip on power slipped through the summer and autumn of 1917, and eventually Lenin orchestrated his coup in the name of Bolshevism. In order to prevent the Romanovs’ escape or rescue, Yakov Sverdlov was tasked with moving them from Tobolsk to Ekaterinberg (later renamed Sverdlovsk). But the tensions of the dev-eloping civil war, and the anger of the workers, peasants, soldiers, and sailors, meant that threats existed all along the journey. The Romanovs were never safe.

Service highlights various reasons why. While Ekaterinberg was more secure for the Bolsheviks than Tobolsk, the Bolsheviks of the Urals were stunned at the Brest-Litovsk Treaty which removed Russia from the Great War in Europe. They were inclined to believe that the Moscow Bolsheviks were thus beholden to, and in alliance with, Germany.

For months, rumors swirled that the Romanovs had been killed without orders. There were Left-Socialist revolutionaries who governed with the Bolsheviks, but who rejected Sovnarkom, the Bolsheviks’ first government in Moscow. There was the gathering White Army in the south that would soon be plunging the country into civil war. And there was a Czechoslovak legion marching toward the Urals which seemed unstoppable to the newly organizing Red Army.

To say that Nicholas and Alexandra lived in an ever-more-tense crucible is to show that they were microcosmic examples of what any citizen in Russia was going through at the time. The forces of change and violence would touch all. Service’s work in recapturing this story of abdication, incarceration, constriction, boredom, and terror is mundane in the telling but indicative of tremendous drama.

Over this period of months, the Romanovs’ freedom to wander was reduced and restricted. The entourage dwindled. The food became progressively worse. The warders pilfered and became bold and abusive to the family. The rooms got colder, the walls wetter. The bars more clearly set around them. And they all had to adjust to the inevitable, without knowing when and how it would arrive — a desperate situation, like a slow-motion plane crash.

In Service’s telling, it appears as if the Romanovs, and their doctor and chef, were somewhat taken by surprise at the very end. They were woken at midnight to mortar fire from the dreaded Czechoslovak legion and told they were to be moved. They dressed and prepared themselves calmly, then were led to the cellar where a declaration was read out that they were to be executed immediately.

Nicholas Romanov, from his abdication of the throne to his brazen murder 18 months later, is a fine central figure for epic history, as Robert Service illustrates. The forces clashing around Nicholas from February to October 1917, during the subsequent Bolshevik consolidation of power, and then at the outbreak of the civil war by mid-1918, all took energy from him and his “fortress with a heart.” And that is what doomed the entire Romanov family.

Y.S. Fing is a composition lecturer at a local university and a literary gadfly in the DC area. He belongs to the Washington Biographer’s Group, and is a committee member of the Washington Writers Conference. Recently, he has been experimenting with short essay form in Fingism and Finglish.