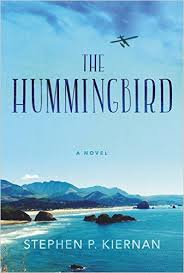 Writers seem continually drawn to war and death — perhaps because we don’t understand them; perhaps because they bring us face-to-face with our own mortality in a way that scares and intrigues us; or perhaps simply because they are, sadly, common occurrences. In The Hummingbird, author Stephen P. Kiernan uses death and war to focus on the experiences of individual men and women and, in so doing, satisfies in that crucial fictional task: telling a larger story about what it means to be human.

Kiernan divides his novel into two narratives: one, the story of a compassionate hospice nurse, Deb Birch; the other, an unverified account of the only World War II Japanese attack on U.S. soil (apart from Pearl Harbor) and its ripple effects — a novel within a novel.

Readers learn early on that Deb tries to be everything to everyone — to her crotchety, solitary patient, Professor Barclay Reed, who is dying of kidney cancer, and to her husband, Michael, who returned from war six months ago. Deb’s inner monologue about the rewards and difficulties of being an end-of-life caretaker and the wife of a veteran is beautiful, poetic prose, but it occasionally feels overly expansive.

In reflecting on the insights she gains from her work, she says, “Actually hospice is the most enriching job on earth, because a person who is dying savors everything, takes nothing for granted, and that is contagious. When I’ve seen a man give what may be his last hug, the one you give me when I get home is even better.”

Such language may be what we all would like to say in such moments, but it seems improbable that anyone could assess and describe so many difficult and emotional situations so eloquently on all occasions.

The novel within a novel, called The Sword, details the failed attempt by a Japanese fighter pilot to bomb an Oregon forest — and thereby terrorize Americans during World War II — and its aftermath, which sees that same pilot visit and make amends with the people of the country he once called his enemy.

Deb’s patient, the professor, at first utterly opposes to any personal advances she makes. But eventually her persistent, steady presence wears him down, and he reveals to her that he never published the book following an academic scandal that left him embittered and isolated. The details of the scandal, however, beg credulity. The professor fell on his sword (as it were) for a graduate student and took the misplaced blame for plagiarizing.

Though the professor and Michael may seem like polar opposites, Deb finds common threads between them, and it is from these threads that the bulk of the book is woven. Having dealt with people at their most vulnerable, Deb knows that, in each man, some unrelenting, untreated wound festers, and she desperately wants to help both heal.

Her husband, with whom she once enjoyed passionate nights and affectionate days, now turns away from her. After Michael intentionally rear-ends another man’s car and Deb collects him from jail, he refuses to let her have her say, cutting off her attempts to start a conversation by asking her to “just start the car.”

Heartbreakingly, Deb’s internal monologue reveals, “So I did. And drove us home in silence. And never said the sentence I had wanted to say and wanted him to hear: Michael, I still love you.”

The professor’s reticence proves, in some ways, easier to tackle, because Deb is not as emotionally invested. Both the professor and Michael are connected to warfare: the professor by his love of World War II history and his unfinished book; Michael by his inability to confront his own history and unfinished business.

The professor thus offers Deb advice on how to move forward with her husband — but the connection feels somewhat forced; just because a person is knowledgeable on the history of one particular war doesn’t mean he is qualified to suggest an appropriate treatment plan for a psychologically suffering veteran.

When the professor opines that “the main thing that giving a big gift required was courage,” Deb decides to buy a puppy for her husband despite, or perhaps because of, knowing he was traumatized by dogs during the war. The idea of a veteran’s family member doing such a thing, and moreover of the veteran embracing and being partially rehabilitated by it (as Michael is), seems far-fetched at best and dangerous at worst.

Still, the much-needed catharsis in both narratives does come, and readers will find it incredibly satisfying after the suffering of all three characters. Kiernan wisely resists the urge to tie each story into a neatly resolved bow, allowing for the possibility of continued growth and healing in Deb and Michael’s marriage without explicitly stating that all will be well — the wounds of war, after all, do not all heal at the same rate or in the same way.

Though the rationale behind the storylines occasionally falters, those who love beautifully crafted prose and the hope offered by redemption will enjoy The Hummingbird.

In this fun beach read, a jilted housewife goes on a madcap journey to win a Palm Springs pageant.