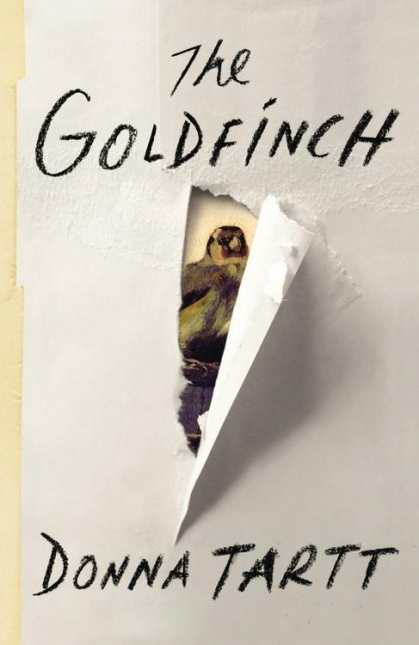 Having made it to the end of Donna Tartt’s new novel, The Goldfinch, I can’t help feeling that I read a different book from the one described in glowing review after glowing review — so much so that I’ve wondered if these rapturous reviewers actually read the book’s second half.

The 784-page novel starts out strong, with our narrator Theo Decker, holed up anxiously in the Amsterdam hotel for reasons mysterious to us. Quickly the narrative jumps back in time, to the day 13-year-old Theo and his mother were caught in a bomb blast at the Met. In a highly compelling sequence, Theo’s mother is killed, and he finds himself attending to a dying man, Welty, who presses a mysterious ring on him, along with deliciously cryptic instructions about what to do with it. He also encourages the stunned Theo to help himself to a priceless painting, The Goldfinch, which he does. The day’s events lay the groundwork for the novel, which covers the next decade-plus of Theo’s life.

After the bomb blast, the chilly, uber-WASPy Barbours of the Upper East Side, allow Theo to stay in their Park Avenue apartment for a few weeks. During this time he follows Welty’s instructions regarding the ring, which lead him to Hobie, an antiques dealer and furniture restorer, and to Pippa, Welty’s daughter, who also survived the bombing, and with whom, for the next many years, Theo finds himself hopelessly in love.

Enter Theo’s ne’er-do-well, scofflaw father, who swoops in from Las Vegas with his girlfriend, Xandra, in tow. They take Theo back to Nevada, where they live in a wonderfully rendered half-built housing development far from the city. Theo makes friends with Boris, a Russian Artful Dodger with whom he drinks a lot and does many drugs and sometimes (I think?) has sex. So far, so good: a tragedy, a mystery, a crime and a beleaguered hero against whom the odds are well stacked.

But here, in the haunting hinterlands of Las Vegas, the narrative begins to drag. Scene after scene describes, in great detail, the alcohol and drug-fueled exploits of Theo and Boris, their quasi-philosophical conversations, their generally delinquent, somewhat futile lives. Because Theo’s father is a gambler (and an asshole) and a serious pill popper and Boris’ father is even worse, Theo and Boris must band together to survive, scrounging for food and generally raising themselves. They’re doing all right, relatively speaking, until Boris acquires a girlfriend, Kotku. Theo is jealous and resentful, and the narrative feels like it’s heading in the direction of a tortured love story: a young man falling in love with his best friend.

The novel completely abandons this plot thread, though, as events propel Theo back to New York, and from this point on, the novel loses its way. It becomes flabby and unfocused, and Theo, as a character, becomes less consistent, his relationships less plausible, his motivations and actions ever harder to understand.

No question, Donna Tartt writes superbly. The sheer breadth of her vocabulary is amazing, and her descriptions, particularly of people and of New York itself, are often spot on. The problem is she (or her editor) didn’t know when to say when; instead, the details and descriptions, often of places, people or events that have no bearing on the plot, abound, weighing the story down and ultimately becoming irritating. I found myself flipping through the pages, skimming over conversations and scenes to see if anything would actually happen, which often it did not.

As a narrator, Theo (via Tartt) is beyond dutiful in his descriptions, never turning down an opportunity to provide the names of clothing brands (Turnbull & Asser, Liberty), stores (Morgan LeFay, Tiffany), perfumes (Chanel No. 16, Chanel No. 5), or places the Upper East Siders vacation, while at the same time leaving out information that would have been highly useful. For example, Theo bafflingly neglects to mention that he is a drug addict for several hundred pages — presumably while the drug-doing is going on — and then he drops this fact retrospectively and rather matter-of-factly when it serves an unlikely twist in the plot. There’s a level at which finite details serve to inform, elucidate and ground the reader in a novel’s world, and then there’s a point of excess, where they distract.

Theo’s details also start to feel pretentious — name-droppy — as if Theo’s that obnoxious, sort-of-pathetic guy at the party, trying too hard to prove his fancy New York pedigree, which raises the larger issue of Theo as a character: he simply doesn’t make sense. The way he describes New York makes him sound fancy, materialistic and effete, characteristics he does not possess in the preceding 400 pages. In several places his language even sounds British, bizarrely: for example, what New York (by way of Las Vegas) teenager calls Tide “washing powder,” or photos “snaps,” or rain boots “wellies”? Or says, “it was getting on,” meaning it was late? And not just Theo but all the New Yorkers of the novel sound more like Audrey Hepburn than any present-day New Yorkers I’ve ever heard. Furthermore, his relationship with his fiancé, an absurd caricature of a fancy New Yorker in her own right, is so flat and unbelievable that it undermines any consistency or credibility the character of Theo might have had.

The book has been called “Dickensian,” a label I think apt; not only does it read as if Tartt were being paid by the word, but as if she were publishing the story serially, with no opportunity to go back and edit, to rearrange, to cut, to see the characters and story as parts of a comprehensive whole. Especially in the second half, the plot developments and characters feel forced, almost haphazard, popping up willy-nilly without the foreshadowing or careful seed sowing a well-crafted — and re-crafted — novel requires. For example, the plot in the second half revolves around gangsters who materialize essentially from the ether, and they, along with several improbable twists and turns, determine how the entire novel resolves.

In a recent interview, Ann Patchett referred to a cardinal rule of fiction writing: that if a scene (or a detail, or a description, or a character, for that matter) doesn’t further the cause of the novel, no matter how well-wrought or insightful or witty that scene may be, it needs to be axed. In The Goldfinch, Tartt flouts this rule so flagrantly I began to wonder what was the novel’s cause and ultimately, if it has any cause at all.

Emily Jeanne Miller is a writer living in Washington, DC. Her first novel, Brand New Human Being, was published by Houghton Mifflin Harcourt in 2012.