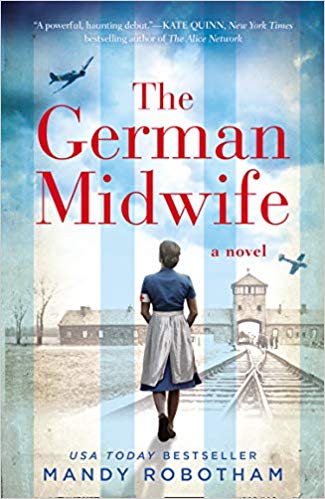 Originally published in the U.K. as A Woman of War, the instant bestseller The German Midwife offers astonishing portraits of several women caught up in Hitler’s nightmarish aspirations. The circumstances that threaten the lives of these women (and of countless others) make this story at once an historical novel, a thriller, and a romance.

The narrator, a young nurse and midwife named Anke Hoff, finds herself in a Nazi work camp where she is essentially a prisoner. Though the timeline of the story starts in 1944, italicized flashbacks begin two years earlier, establishing an historical, professional, and familial context for understanding Anke. These sections also illuminate the deteriorating situation for people living under the Reich, whether they be citizens, despised minorities, or resistance sympathizers.

Anke is imprisoned for having provided birthing services for Jewish women despite a Nazi policy to end Jewish reproduction. Inside the camp, she shows leadership, compassion, and disdain for her country’s moral decline.

Nonetheless, because she is the most skilled midwife available, she is selected — actually, ordered — to protect the Fuhrer’s child incubating in the womb of Fraulein Eva Braun. Propaganda minister Joseph Goebbels and his wife, Magda, will make sure that Anke performs her duties properly, as will the staff attending to Hitler’s mountain estate and headquarters. This child, especially if a boy, will insure the future of Hitler’s genetic line and racial vision.

Anke develops a liking for Eva, whom she considers an innocent young woman slavishly enamored of the devil. She develops much more than a liking for a handsome and considerate Nazi officer, Captain Deiter Stenz, who carries out important duties at the headquarters. She is perplexed by how a man she respects can be part of the Nazi mission. Readers will be similarly puzzled.

Suspense — and there is plenty of it — in this carefully developed narrative arises primarily from the ups and downs in Eva’s high-stakes pregnancy, the risks of Anke’s romantic dalliance, and the shadowy references to the progress of the war.

The relationship between Anke and Eva is generally a positive one. Eva’s dependence on Anke reaches something like affection, and Anke is sympathetic to Eva and the overwhelming pressure of her plight as conduit for the master race’s continuation.

Other well-drawn characters include Frau Goebbels, sarcastically called “The First Lady” for the power she wields; Anke’s friend Christa, who is sent from the work camp to assist at headquarters and is of great use to Anke; and Sergeant Meier, an efficient and cynical underling.

An intriguing feature of the novel is how author Mandy Robotham — a real-life midwife — educates readers about midwifery. She carefully describes the stages of pregnancy: the craft of discovering what’s going on inside a mother’s body; the coaching and cheering to salve a patient’s pains and fears during childbirth; the maintaining of cleanliness and comfort; the crucial assistance provided by other women; and the interplay with doctors.

Robotham’s achievement in The German Midwife is powerful on all fronts. Her sense of time and place is authentic and prophetic. Her major characters are sturdily developed, and the novel is also populated with interesting minor characters. From her own expertise as a midwife, along with a confident mastery of sources and a large dose of sympathetic imagination, the author has constructed an enlightening and compelling literary experience.